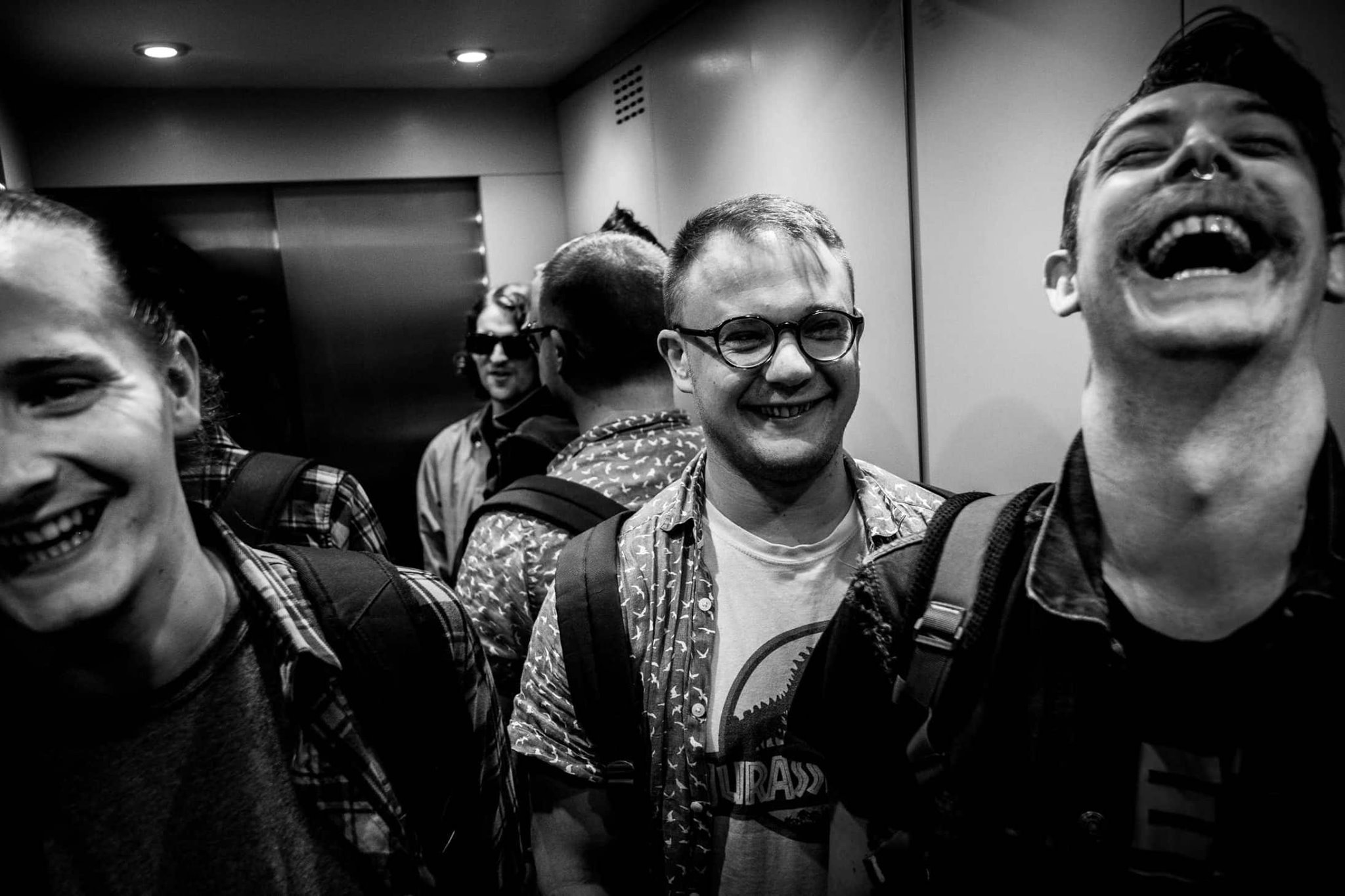 By Ashley JacobOctober 7, 2019 No Comments

‘Music: the aural frontier. These are the explorations of the prog band, Body Hound. Its continuing mission: to explore strange new harmonies, to seek out new melodies and new rhythms, to boldly riff where no band has gone before.’

Well, I did ask for a mission statement, and there it is. The above was written by Body Hound guitarist, Joe Nicholson (or should I say ‘Joe-Luc Picard’), who kindly gave Everything Is Noise a wonderful insight into the working of this fantastic band. Released last September, Body Hound‘s debut full length album, No Moon, is a 12 track prog-metal opus of epic, triumphant and energetic proportions. It’s so rich with spacey food for thought, that an exploration of cosmic standards is probably required to fully soak in everything the record has to offer.

It begs the question of ‘how‘ in many different respects: ‘how‘ did they come up with the ideas for those entertaining and enigmatic riffs, ‘how‘ did they simultaneously lock into those ideas, and ‘how‘ are they able to perform them so well in a live setting? Fortunately, Joe was eager to let us in on all of Body Hound‘s stellar schematics.

To hear a rawer foundation of their now established identity, check out the 2014 EP, Rhombus Now. It was the first record Body Hound released, and back then, the band consisted mainly of just two members – guitarist Calvin Rhodes and drummer Ryan Bright. With the later addition of Joe Nicholson on guitar, and bass duties of Joseph Thorpe, they were swiftly able to evolve their sound, taking the raw blueprints of Rhombus Now and creating something far more substantial in this year’s No Moon.

‘No Moon incorporates more melodic moments and three-part harmonies between the guitars and bass than we had on Rhombus Now, this has rounded out our sound and added some more layers of depth to the music.’

In essence, No Moon was Body Hound‘s effort to recapture the musical style and raw youthful energy of that initial EP, whilst also showcasing a clear sense of development in their sound. What followed was a gradual piecing of riffs, a great deal of refinement, and an eventual state of re-writing and re-learning until the job was done.

‘One of the most difficult parts of this process was having to let go of riffs, ideas, or entire pieces that we loved dearly, purely because they weren’t working in context with the rest of the material.’

Joe was even able to break the songwriting process down for us in a more technical sense, so us terrestrials can gain a better understanding of how the music was made. It began with riff-writing and idea-sequencing, with Fruity Loops often being the software of choice. During this process, the band went deep into the exploration of scales and modes in order to grasp the right sense of musical narrative for Body Hound. For freedom of creativity, they often used Messiaen’s Modes of Limited Transposition. After expanding from their initial riffs, they were then able to jump toward the next part, and repeat the process thereon until they had what Joe rather beautifully describes as ‘a fractal sprawling mess‘.

Then it’s a case of further refinement, with the addition of harmonies, melodies, and transitions to bring clarity to the original rough structure. At the end is a product from which the listeners can hopefully gain the following:

‘As many different flavours of joy as possible, along with perhaps a sense of some deep and primal energies within them, which are difficult to express through the medium of language.’

As well as Olivier Messiaen, we can also add composers Igor Stravinsky, Johann Sebastian Bach and Maurice Ravel to the list of Body Hound‘s influences. In particular, Joe references Stravinsky‘s “The Rite of Spring” as an intense and unusual conjuring of unexpected joyous feelings. He assures us that every note created in this classic masterpiece is important in telling the musical story, and that absolutely nothing was done at random. The effect is striking harmonic complexity, which Body Hound strive emulate in their own creations.

‘I feel that there’s a lot of music that has a veneer of complexity and is perhaps technically impressive to perform. However, when you dig a bit deeper there’s no real depth to the music harmonically, and it can be quite mundane. This is something that we actively try to avoid in our music.’

Like the classical composers which inspired the band, Body Hound‘s music is purely instrumental. In their case it was decided that the added component of a singer would be potentially stifling. Music as dense as theirs has the ability to speak for itself, and therefore needs the appropriate room to breathe. You only need to see footage of them playing live to know that the banquet of sound is hearty enough. In turn, their secret to being so darn tight on stage is simple practice. This in itself can be tricky. Though they try and practice once or twice every week, life doesn’t always make this achievable and, as with all things, the longer it’s left, the harder it is to get back into adequate form.

Fortunately, a strong bond of friendship goes a long way between the band’s four members. Through staying connected, enjoying their job as musicians, and keeping one step ahead of their projects, the Body Hound experience remains a rich one. The resulting sense of motivation and intuition with one another is something that listeners and live audiences are then able to absorb and feel in turn.

No Moon is an irresistible treat for the ears, and a distinct display of Body Hound‘s talents. If you haven’t heard it already, then be sure not to miss out! For the concert goers, the band are preparing for a mid-November tour across the UK, with their friends Poly-Math. Armed only at first with a singular EP, made five years past, Body Hound have swiftly proven their value in the world of experimental music, and all evidence suggests that they will continue to astound.

However, for those hoping for another Body Hound release in the near future, I’m afraid it’s very sad news…

‘We’ll be cryogenically frozen in low Earth orbit for the next 10,000 years or so, and return to repopulate a post-apocalyptic Earth in our own image.’

At least there will be good music.

The above live footage of Body Hound was created by TechNoir Productions. You can hear Body Hound‘s current releases on their Spotify and Bandcamp pages. For all other news and info, visit their Facebook page.