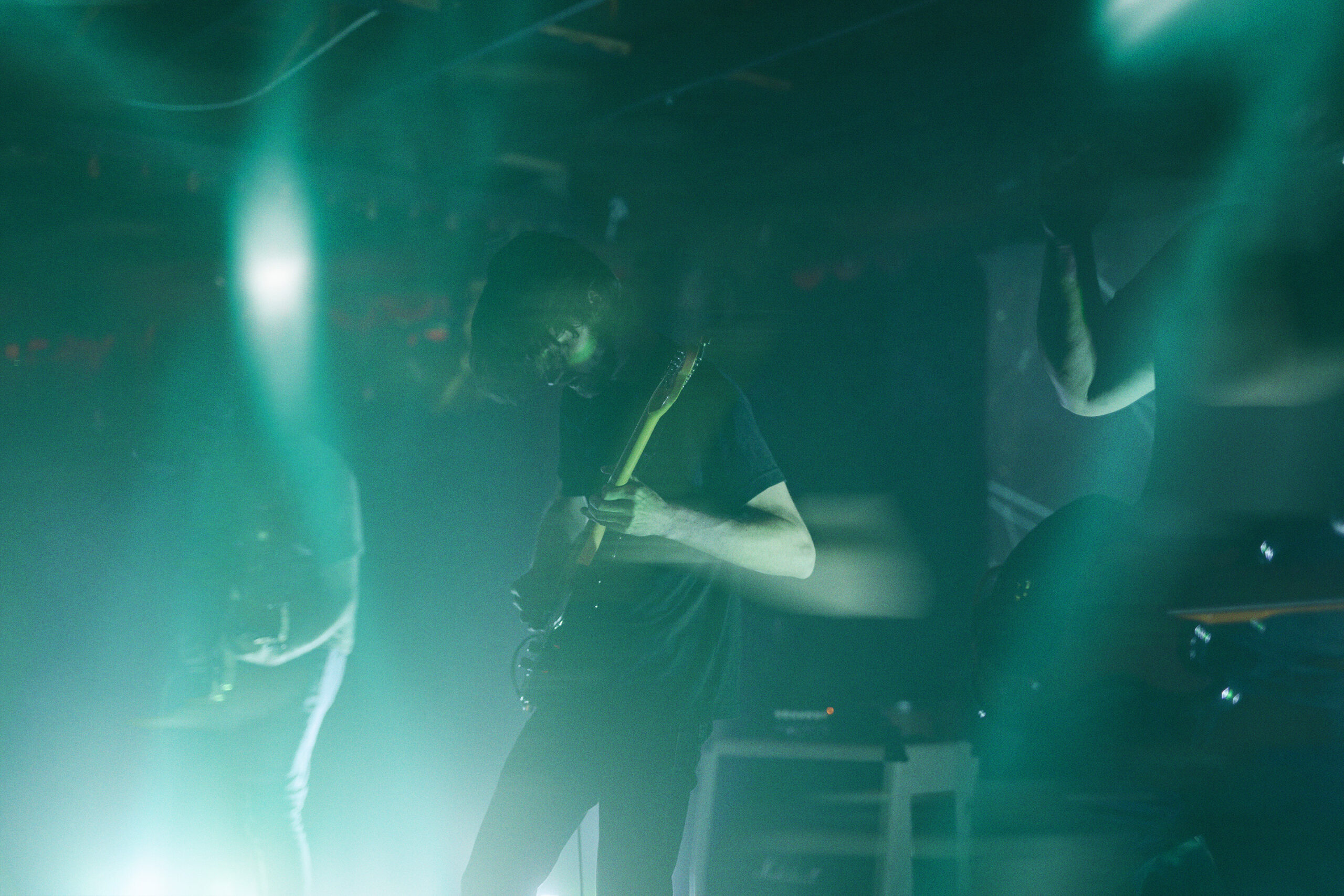 There are certain artists that somehow find their way into your ears and it’s hard to remember where or how you first came across them, they just just to have crept in unknowingly and act as if they have always been part of your life. This was very much the case for my listening relationship with Adam Dodson, a guitarist and composer of ambient soundscapes from Austin, Texas. His was a name that seemed to crop up just about everything I looked, so much so that I felt it was an artist I had known for a long time when his name cropped up alongside the wonderful Secret Gardens for a collaboration (a little more on that later) despite having listened to very little of his music.

A deep dive into the world of Adam Dodson and I soon discovered why he felt so familiar, with his ambient looping videos on Instagram and YouTube forming a large part of my watching history. For the most part these are short little clips, but there is comfort to be found in the reverb coated guitars in the late evening scrolling as you wait for the small people in the house to fall asleep. Even as I write this, the linked video above has been looping for the past few minutes and I haven’t once thought to turn it off. The only surprising thing to me was that I had not yet picked up any of his music, so went straight to Bandcamp to rectify this, picking up Adam Dodson‘s debut album The Risk Of Dreaming.

The Risk Of Dreaming had me hooked immediately, from the initial swells and delay infused picked guitars from the title track. It feels like all the softer moments of some of the great post-rock songs, without ever reaching the wall of noise it suggests it is leading to. As a love of those big pay-offs, I would have expected to miss them, but the comfort to be found in the sounds here has meant that this album has found itself on repeat for quite a while. Tracks like “Equivalent Exchange” show that the music of Adam Dodson is much more than an ambient project with its dancing rhythms and percussive guitar scratches pushing the track along and ensuring variety. “Even As You Watch, I Am Fleeing” moves away a little from the looped electric guitar, with a solitary acoustic guitar and spoken sample taking the album away from the relative safety of the loop station.

Guitar loops, Adam explains, ‘allow me to express my ideas closest to the speed of my brain‘ and are ‘very important to my writing process‘. This forms part of the enjoyment for me watching those previously linked short looped clips on YouTube and Instagram, as they give an insight into the writing process of the artist and some of them will likely go on to form part of a future release. As a point of interest, I wondered if this was maybe one of the reasons for having a solo project, where you can take the time to craft and refine an idea at your own piece. As he explains:

‘I don’t feel like it was a conscious decision really, to start a solo project. I think the seed was planted when I first started sharing music on Instagram. It was originally my way of keeping all of my favorite ideas in one place, but over time my collection of ideas had grown significantly and I discovered a really supportive and thriving community online. 2020 I spent the year under the motto ‘give yourself a chance to do the thing you love‘ — this mindset allowed me to release my first solo album, The Risk Of Dreaming, in March of 2021.’

Taking a step away from The Risk Of Dreaming and looking for more Adam Dodson material or links makes for some interesting finds. Particularly so his involvement in the post-rock outfit Zealand The North, a four-piece with two excellent releases under their belt. Writing with three other members, there are obviously going to be differences in sound and approach, but what remains consistent is the quality of output. Tracks like “Come Promise” from the album Brightness of an Endless Light have little glimpses of Dodson’s ambient expertise, but the inter-play between members provides a completely different dynamic, as Adam explains:

‘Playing in Zealand and playing for myself can often feel like speaking two different languages, which I love. I draw inspiration from a really wide range of genres, and I enjoy having two outlets to place my influence. Writing for myself lets me endlessly explore ideas, and has led to a better understanding of my own musical identity. Writing for Zealand is best when we are all collaborating together. Everyone brings a lot to the table, and understanding each other’s perspectives is what makes the band what it is. Typically it’s Anthony (guitar) or I that bring ideas in, and we polish them together as a group. Each project has different needs, so splitting time between the two requires good planning in advance.‘

These ‘different languages‘ are even more evident when listening to earlier Zealand The North release Modern Prophecy (and in particular its stand out track “The Morality of Others”) which has a completely different vibe, with a riff heavy focus on a chance for the guitar players to really let loose. Suffice to say, if you enjoy the quieter moments of Adam Dodson‘s solo work but want to hear it along with a lot more noise, check out the Zealand The North back catalogue.

Earlier in this piece, there was a little teaser about collaborations with others, which brings us to even more of Adam Dodson‘s music, this time with other fantastic musicians. A project with a fellow ambient artist Liquid Memoirs, based in India (a fair distance from Texas, of course), showcases the beauty of modern technology in allowing two minds to put something wonderful together despite geographical restrictions. The result is the beautifully relaxing Nocturnal/Diurnal, four well-crafted pieces of ambient noise and melodies. Take the closing track, “Diurnal” with its drum and bass foundation, arpeggiating synths, and Dodson’s signature guitar sound and you begin to understand why the two musicians work so well together, something which Adam believes can only serve to benefit his own writing.

‘I love collaborating with people that inspire me. I’ve had the privilege of working with some wonderful artists all around the world, and feel incredibly fortunate to be creating music at a time where it is so easy to work and share files together online. The artists I have worked with have all in some way filled a gap in my musical vocabulary, and helped me write in ways I wouldn’t have considered otherwise. They’ve taught me a lot.‘

This love of collaboration is evident throughout Adam Dodson‘s work (The Risk Of Dreaming also featuring input from Echoed Sycamore, of course), and provides one of the highlights of his back catalogue for me. This being “Constellation Veins”, recently released with New York’s Secret Gardens, who we love here at Everything Is Noise. In just over four minutes, the pairing put merge reverb/delay coated guitars, pulsing synths and sneak in some IDM for good measure. If you’re going to start somewhere with our Weekly Featured Artist, I can’t recommend this track enough.

Thankfully, there is still much more to come from the mind and guitar of Adam Dodson. He explains that there is ‘so much more to share. Writing is underway for both Zealand and my personal project, and I will be spending the next few months developing new sounds. For the first time in quite a while, I’m feeling optimistic about the future.‘ You just need to take latest release Recurring Dreams, a celebration of The Risk Of Dreaming a year after its release, to see that Dodson is indeed pushing forward with new ideas. Rather than the standard remix of album tracks, Recurring Dreams features two re-workings of album tracks in addition to a previously unheard piece which wasn’t on the album. A simple idea, but a nice touch to keep things interesting. With plenty of material, I hope this feature has given you enough encouragement to take a deep dive into the world of Adam Dodson. Before you do, we’ll leave the final words to the artist himself:

‘If you made it this far, thank you so much for reading! I just released a new EP called Recurring Dreams — it’s streaming everywhere. I love talking music and try my best to respond to everyone who reaches out to me on Instagram or email.’