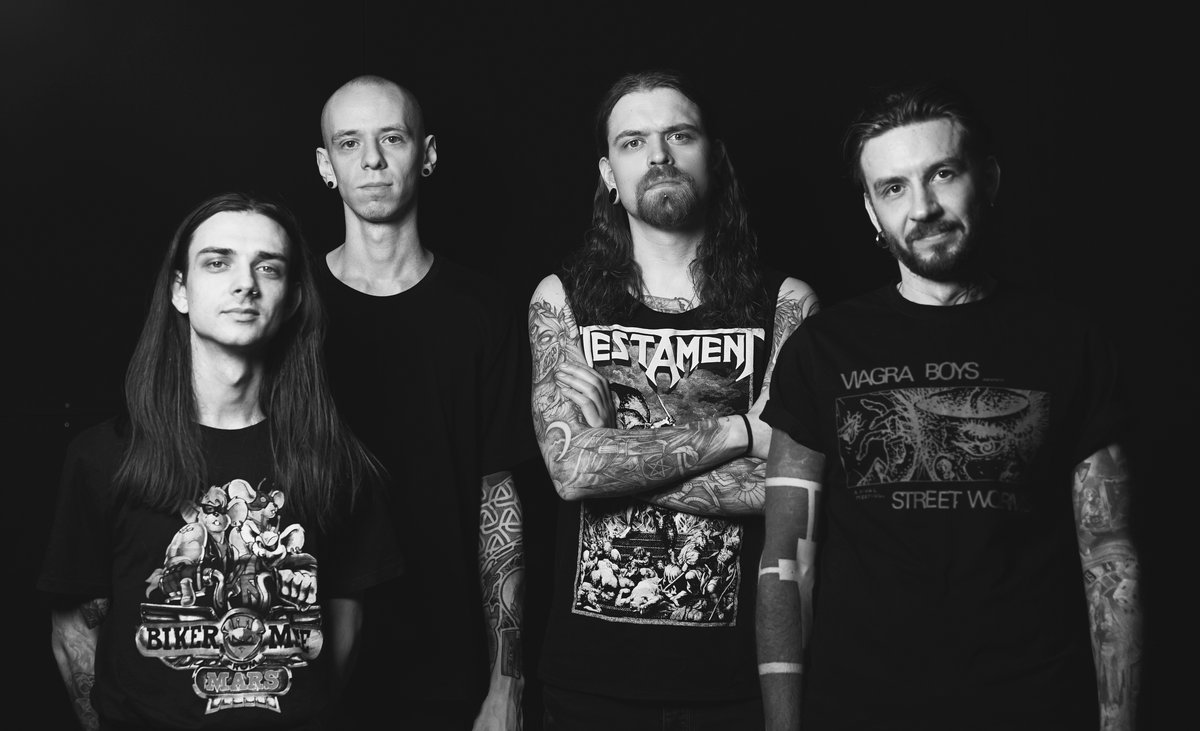 Awakened is ready to fuck shit up. Yeah, that’s the kind of record we’re looking at — a big angry pile of noise.

I hope I have your attention already. If I don’t, I’ll bet you whatever that by the end of this review you’ll be hella sold on this record. Vorvaň really don’t fuck around, I swear. ‘Who is Vorvaň?‘ you may ask: well, it’s a band from Russia that plays hardball hardcore with a bunch of influences to make things properly pop. I seriously cannot start to enunciate every stylistic tinge the band incorporates in their unique mix. It’s just something else and you have to experience it head on at obnoxiously loud volume to make sense of it.

Awakened is the band’s second full-length album, and it’s a fully fleshed mammoth which will rail you into the ground like a kilometer-long freight train. Just four minutes shy of an hour, the record is split into twelve tracks and it offers us plenty of meat to hang on to. Somehow it doesn’t feel that long, but it does further emphasize its massive mood and pounding character.

You get the full abrasive treatment from top to bottom. Fast riffs? Check. Machine gun drumming? Check. Wholly savage and unhinged vocal delivery? Also check. A lot of other wild shit? Check too. This isn’t the monotonous, one-sided kind of aggressive, either. There are a lot of things that keep things entertaining on all levels. Ultimately, no two songs are the same, however they do retain enough of the established sound to maintain an even flow and a sense of unity all around.

OK, so for example, “Shaped by the Void” has something of a mid-00s metalcore vibe going for it, while staying firmly rooted in a hardcore background, with a heavy emphasis on groove, while also managing to showcase the band’s more melodic side of things. See? There’s a lot going on even over the course of one song. I wrote a premiere a while back for “Paths We Have Strayed From”, where I delve a little into that particular song. It’s an absolute banger, so definitely give that one a spin too.

“Red Mistress” aims for the more punk side of the hardcore foundation, while also staying true to the melodic leanings and to something that feels like a southern/sludgy edge. It’s definitely peppered with the high-intensity delivery like every other track, though. The soaring vocal delivery is definitely one of the highlights, and what I also think is quite noteworthy is how all the other members also do backing vocals, something that reminded me of how Mastodon liked to do things.

“The Reason”, but also “Anhalter Bahnhof”, just pop out of nowhere as highly cinematic and dramatic interludes, so to speak. They were definitely the most surprising moments on the album, and it kind of made me feel like the first time I ran into “Quiescent” on Sylosis‘s Dormant Heart. While at first I was confused a little, the songs are blended quite well as a mood into the context of the record, and it doesn’t ultimately feel like they’re thrown in just for the sake of diversity.

“Of Those Who Bled” hearkens heavily to classic heavy metal and while I don’t really care for that genre anymore, I definitely welcome the band’s rendition of this moment. Similarly, a thrash metal element can be seen throughout, in certain ways quite noticeable on “Stalemate”, which also showcases some kind of a proggy nuance, as well as a more pronounced sludgy influence.

I could probably take up the space of three normal reviews to do a proper track-by-track breakdown of this record, but that would be too exhaustive. I’m aware I can’t appropriately crystallize the high-octane essence of the band, however I can hopefully lure you into what they do so you can experience this madness firsthand. It’s definitely a wild ride which is rewarding for any listener who needs something that kicks hard.

It’s not that it’s fast, or slow, or heavy, or melodic, or whatever. It’s the fact that there’s a fiery energy all around which simply makes you want to move, like right now. Awakened is definitely one of my favorite hard-hitting records of this year, and it’s also quite special to me. I’ve never heard anything like this, nor do I remember the last time such a lengthy hardcore record didn’t leave me snoozing in my chair.