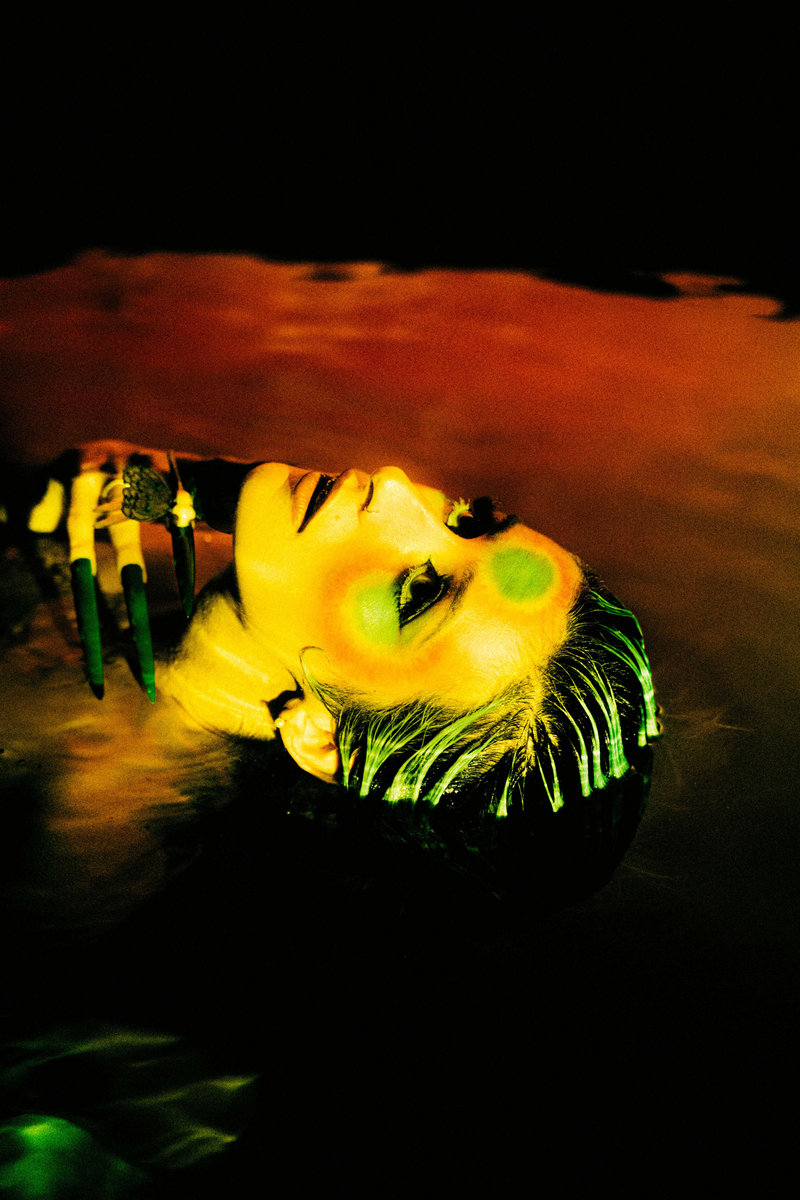 By Shaun MilliganFebruary 14, 2022 No Comments

It’s difficult to convey just how crucial the uplifting, whimsical, and playful side of music has been for me in the past few weeks. I shan’t bore you with explicit details, but the important point to note is that Virginie B became the latest in a string of welcome musical additions to my life. The album under my watchful gaze today also arrived just in time to snatch itself a well-deserved spot in our recent article on The Noise Of January.

The artist, who hails from Montreal, Québec, has been sharing her layered, technicolour take on pop since 2016’s People With Problems, and now she returns With INSULA. Stemming from – in her own words – ‘the deepest and most colourful corner of my brain‘, it’s painted as a vibrant concoction of Virginie B‘s creative whims. For those wanting the succinct summary of my thoughts? Well, I’m confident you don’t need a translator to decipher what is meant when I say that c’est fantastique.

Pourquoi? Why is INSULA an album worth your time and attention? Well, there are several reasons, as it happens. A large factor lies in the catchy songwriting; verses draw you in with fluid vocal melodies, preparing you for choruses – such as those on singles “Insulaire” and “Alpine” – that pop and crackle with a glistening, jaunty energy. Furthermore, these endearing compositions explore a breadth of musical realms, thanks to an entourage of fellow creatives. Virginie B helms the outing with her versatile, distinctive voice (as well as providing equally enjoyable guitar), but the accompaniment provided by a complementing cohort of no fewer than ten people noticeably expands this palette to epic proportions.

I also love the lo-fi vibe that persists in the percussion of INSULA, giving songs (particularly those with a more r’n’b edge) a comfortingly minimalist backbone of a beat on which to build. What’s more, the liveliness of art pop and the sensuality of neo-soul entwine brilliantly across the board with twinkling synths and bolstering horns. Then, just as you think you’ve got a handle on the wealth of sound on display, there are instrumental choices that warmly fold sparkling touches of nu-jazz and disco into the mix.

Perhaps most impressive is that all this is achieved without ever sacrificing the attractiveness of the shimmering, amorous tones that underpin the record and its themes of love, life – and more – for those inclined to delve deeper. A sense of romance hovers tangibly in the air above tracks like the jazzy “Alexis” or the smoothly flowing bars of “SEXUS”. Wherever you turn, there’s no denying that the singer-songwriter has plenty to share with us and paints her picture without restraint. This is apparent both in the poetic words penned and the expressive instrumentals.

Virginie B also liberally seasons each track with little incandescent touches. Fancy an alluring saxophone feature? “Insulaire” has you covered. A smattering of drum and bass? See “Insomnie II”. There’s even a nod to ’80s power pop, with a ballad-esque guitar solo tucked in the latter half of “The Love”. Elsewhere, “Les grands naufrages” offers a slightly haunting vibe that foreshadows the somewhat sombre tones of “XI”, our brief instrumental closer. For a concise embodiment of INSULA‘s variety, I hastily direct you to the “Insomnie” collection – three tracks tied by name, yet distinctly different in personality.

Interestingly, delivery is split between English vocals (such as on “T.B.T”) and Virginie B‘s native Canadian French; regardless of your proficiency in either language, don’t let this prevent you from investing yourself. Despite speaking a fair amount of European French, I initially gave little thought to grasping or translating lyrics. The result was a pleasant 34 minutes in which my focus – rather than torn between melody and message – simply enjoyed the entire character of the sound conjured by Virginie B. Sure, I harvested further understanding on repeat listens, but my point remains that multilingual vocals are merely one facet of this well-rounded record, and need not be a barrier in appreciating it.

With its lo-fi percussion sensibilities, vivid dynamics, and art pop panache, Virginie B provides eleven entertaining reasons to indulge in her latest outing – an album that signals another successful chapter in her musical ventures. INSULA carries itself remarkably well, with hooks that ingrain themselves and a vivacious overall execution. If an understanding of French in any form is not something you possess, that’s okay; great music transcends language barriers, so there’s no reason I can think of not to treat yourself to a jaunt through the colourful, feel-good forest of Virginie B‘s mind.