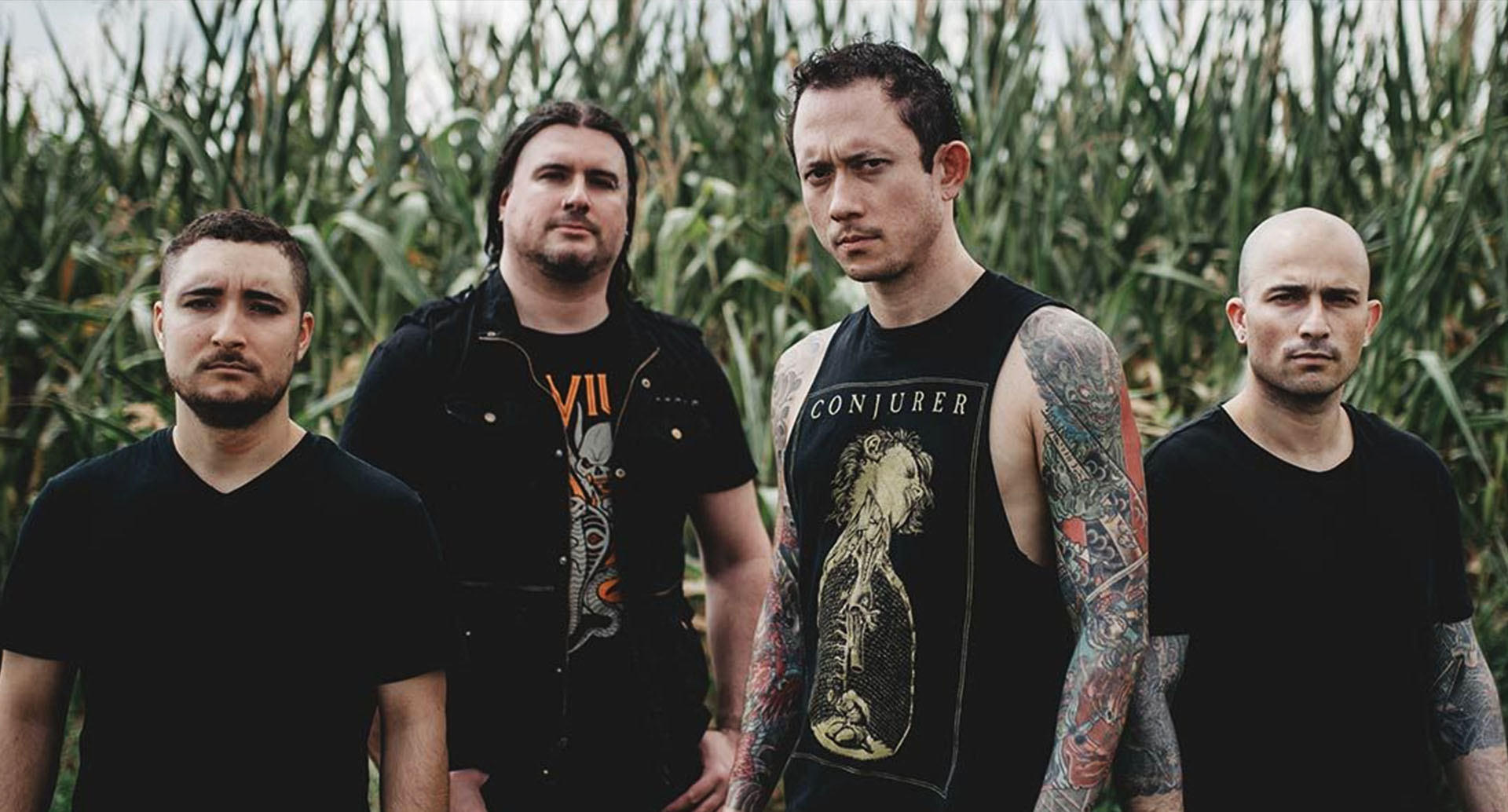 Trivium – “In The Court Of The Dragon”

By Billie HeltonNovember 6, 2021 No Comments

In The Court Of The Dragon shows Trivium are still as kickass as ever ten albums into their career.

Love them or hate them, Trivium have become one of the only household names in modern metal. There aren’t very many bands that have reached their level of success within the community, and only a handful of older bands that have left a similar mark to what Trivium continue to accomplish. Over ten full-length albums now, this group has crafted their own unique blend of thrash-laden, death-adjacent, melodic modern metal. It is truly hard to lump them into any particular category of metal as they continue to create impressive music that doesn’t sound much like anyone else. It is truly an impressive accomplishment to be so original and still be paving the way for other bands with so many albums under their belt.

There are a handful of things that have become synonymous with Trivium over the years, and I think the biggest one of those is Matt Heafy and Cory Beaulieu’s always impressive and melodic guitar playing. They are the kings of guitar solos in modern music, and virtually every Trivium track to this day is rife with intense soloing from both of them. Last year’s What the Dead Men Say saw a huge step up in another important department of the band – Alex Bent’s relentless drumming. In The Court Of The Dragon really sees the new drummer playing at his best, and I think he has fully hit his stride with the rest of the group and figured out how to thunder out the most impressive playing the band has ever had. The chorus of “Like A Sword Over Damacles” is a great example of his exemplary playing. The guitars aren’t incredible here, going more for power and a strong melody than an impressive lick. Bent’s laser-focused cymbal work gives the chorus the extra oomph and drive to still be incredible, and it’s one of my favorites of the entire album.

Bassist Paolo Gregoletto also sounds better than he ever has on In The Court Of The Dragon, in more ways than one. The bass guitar rings through the mix with a lot more clarity than it usually does, and it allows Gregoletto to shine on tracks like “A Crisis Of Revelation”, where a bass riff takes center stage for a moment in a way that doesn’t happen very often. Even when it doesn’t take a lead spot, the bass is abundant and apparent. The solo of “Like A Sword Over Damacles” has a really discernible bass line from the start, and it’s just a sign that even the band’s production quality is still improving. The Crusade‘s “Becoming the Dragon” still remains Trivium‘s most memorable bass moment, but this new part shows what 15 or so years has done for the band’s songwriting, as “Crisis” thunders out with deft precision and progression in a way nothing from The Crusade reaches.

There are not many groups of musicians who are still hitting their stride ten albums into their career, and even fewer who are still putting out records as quality as ITCOTD. As far as that quality goes, this is easily Trivium‘s best work since Shogun, and as I spend more time with it, I dare say it might even surpass what has been considered their magnum opus for a decade. I have been a huge fan of the band since 2008, and they are the first band I got tickets to see live, on their Into the Mouth of Hell We March tour, when I was a freshman or sophomore in high school. Shogun is one of my favorite metal albums of all time, and one I still go back to semi-regularly. The more time I spend with each track on ITCOTD, the more complete and cohesive it feels, and the more I want to just keep coming back to it. “A Crisis Of Revelation” and “Fall Into Your Hands” easily sit towards the very top of my favorite Trivium tracks after many listens over the last week. I will admit, there could be some recency bias affecting this ranking, but none of their albums have hit me this hard to make me even question it.

Over the years, the band has experimented with a number of different sounds. There was the classic heavy-metal-inspired The Crusade, the progressive masterpiece of Shogun, the melody-focused Vengeance Falls, and the band’s most divisive work, the serenely clean Silence In The Snow. Last year’s What The Dead Men Say seemed like a culmination of the best parts of the band, ironed out into what could only be a sound wholly Trivium‘s. ITCOTD is a continuation of this trend, but delivered with what feels like more confidence and gusto. I don’t know what makes it so much more impactful than anything else they’ve done in the last few years, but the songs just sound undeniably fun. Seeing them playing the new songs, it sure seems like they are having a blast tearing through them.

“A Crisis of Revelation” is the song that reminds me the most of Shogun, both the album and actual title track. Trivium have not struck gold in the way they did with that absolute masterpiece since, but in my opinion, this track comes close. It has one of the most catchy and memorable choruses they’ve written in a decade and it has shades of the “Shogun” melody. “Crisis” also has one of the best breakdowns of the entire album. Heafy’s fiery delivery of the line, ‘Waiting for all of it to fall’, is something I can’t wait for live, and those pits are sure to be incredible. This breakdown gives way into one of the most impressive solos on the record, which also happens to be one of the more progressive bits as well. The first time I heard this whole section, my jaw dropped and I immediately texted my best friend, and fellow long-time Trivium fan, telling him he needed to hear it immediately.

I think that starting with “Crisis” and going through to “Fall Into Your Hands” are easily my favorite four tracks of the album, and that one chunk stands up pretty strongly next to any other sequential four songs from any Trivium album. “Shadow of the Abattoir” is a piercing and beautiful track. The backing acoustic guitar fits great, and Heafy’s singing is sounding better than it ever has. He hits some notes on this album with such intensity that I was incredibly impressed. The ending of this song is one of the best vocal performances he’s ever delivered: the center bit – from the building intensity of Heafy’s chanting, ‘From the depths, I will rise/ From the ground, to the sky‘ – through the end of the solo made me want to jump out of my seat and run around my house because of the energy. It’s another just incredible display of talent, and one of the longer songs that runs the gamut on every bit of Trivium‘s sound.

“No Way Back Just Through” is a classic Trivium banger, and it’s one I think will become a staple of live performances. It’s the shortest song on ITCOTD, not counting the intro, and it goes from 0–100 from the opening second and doesn’t hold back one bit. It’s fast, thrashy, and has an anthemic chorus that’s easy to sing along to. As much as I like most of the longer songs on ITCOTD, I do think some songs could be shortened by at least a little. “No Way Back Just Through” gives you just enough in its under-four-minute runtime and leaves a more lasting impression as a result. Interestingly enough, the longest song on the album follows it up. I love how long “Fall Into Your Hands” is, and it goes through enough progression through its runtime to warrant being almost eight minutes long. From the dirge-like slow churn of the beginning to the bass-led clean interlude, it feels fresh within the confines of the record, let alone the length of the track. When it comes to trimming fat, it’s a very minor nitpick and I don’t think ITCOTD necessarily suffers from the length of any song. There isn’t anything I’d really consider a filler track, and with repeated listens I haven’t wanted to skip anything still.

Trivium have truly done something that feels like a near-impossible task. Ten albums into their career, they are still hitting the same stride they managed to set with Shogun. While a lot of people think there were some missteps along the way, every move the band has made has led them to where they are now. They have evolved their sound to encompass the best of everything they’ve done without ever sacrificing that visceral, thrashy edge they started out with. In The Court Of The Dragon shows how far they have come in every regard, from songwriting to singing, to even marketing. Trivium have become absolute trailblazers in the metal world, and it’s exciting to see where they go to next.