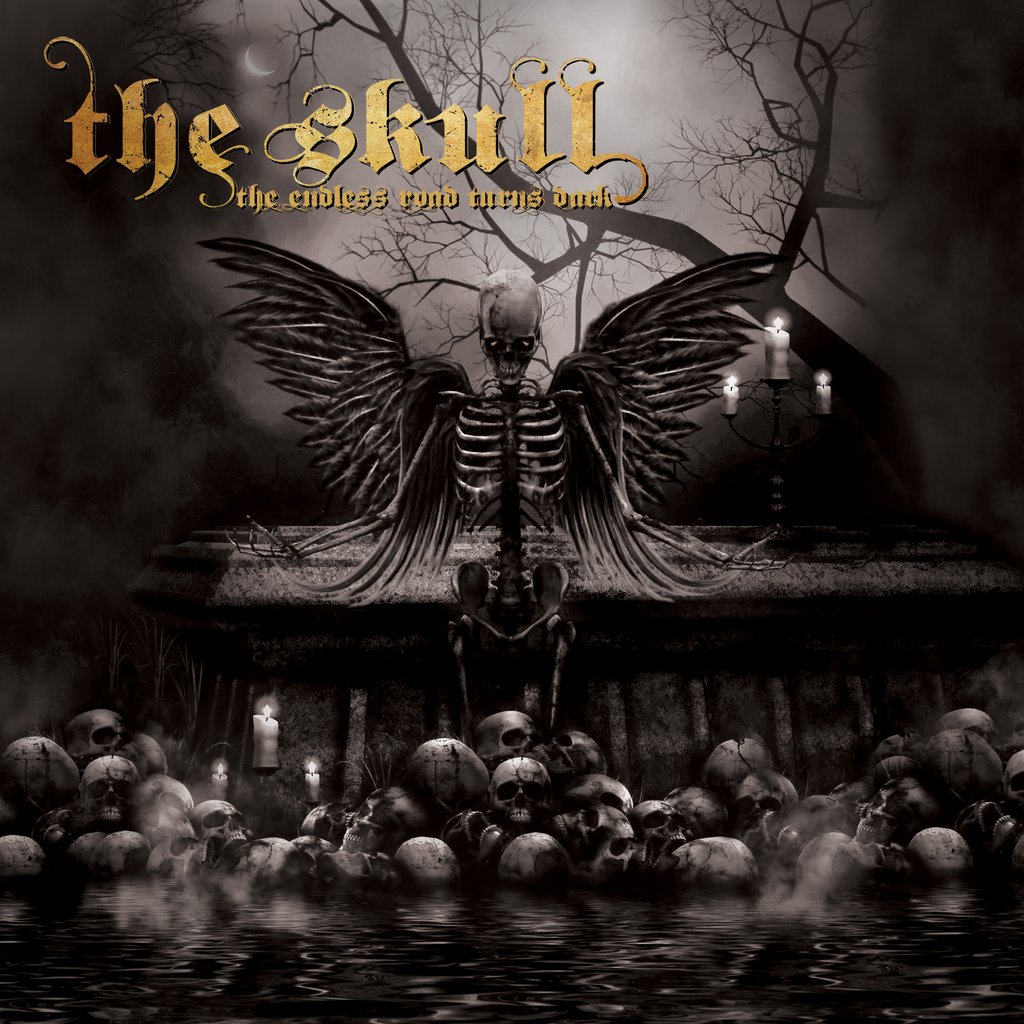 By David RodriguezOctober 9, 2018 No Comments

The Skull is more than a mere spiritual successor to classic doom metal bands like Trouble, but their experience, formed over decades of creating melodic and powerful music, can’t be understated when it comes to The Endless Road Turns Dark.

They say if you go looking for Trouble, you’ll find it. Well, I went searching for it after hearing that Chicago-based band The Skull was composed of Eric Wagner and Ron Holzner, the singer and bassist respectively for the classic doom metal band Trouble. What’s more, I also found Brian Dixon (drums for Cathedral), Rob Wrong (guitar for Witch Mountain), and Lothar Keller (guitar for Divinity Compromised, among others) rounding out the roster. This is a veritable supergroup! Their second album, The Endless Road Turns Dark, has been drudged up from the Sabbathian depths and, boy, does it sound amazing.

If you’re familiar with any of the doom-oriented bands that I just mentioned, then perhaps you already know what you’re in for. A melancholic mood, heavy-ass riffs that prioritize catchiness and melody, and epic vocals, all of it never breaking mid-tempo. Yes, this is as classic as the doom metal sound gets. I won’t fool anyone by saying this album has wild appeal among doom fans, but I think what modifications The Skull do to the formula they’ve helped establish over years in other bands are interesting and worthy of mentioning.

Trouble never shied away from lyrics that flirted with Christian themes. Spiritual notions of death, afterlife, salvation, and repentance can be found all throughout their catalog. There’s similarities here for sure; lots of references to traditional Christian scripture and tenets are present, even with song titles like “Thy Will Be Done” (which is also a lyric in the title song). Wagner’s voice is noticeably aged and more reserved than it was in the early 90s, but it services the material so well. Each record sounds like a wise man reflecting on life lived, those he’s lost, and contemplating the mysteries and intricacies that round out people’s experiences on this mortal plane.

The opening riff of “Ravenswood” is disgustingly good; wonderful melody, heavy, great groove. Really, there’s a riff or two like this in nearly every song. The writing is top-notch, indicative of experienced musicians that know what their fans want. It’s a little sludgy at times, too. The parallels between doom and sludge are frequent, but it’s hard to hear the deep fuzz of the guitar tones and deliberate pacing of the rhythm sections and not think of grimy sludge. Some of the album’s presentation also has a bluesy grunge air to it, mostly during slower parts like the ones that make up “Breathing Underwater”. It’s eerie, just as much akin to a band like Alice in Chains as it is Black Sabbath. Much of the album ebbs and flows between these moods. It’s so seamless, fitting in nods to their pedigree, but incorporating newer approaches to color in their dirges.

This all adds up to me not having much to complain about at all. I admit to having a bias toward this style of music. I concede it may not impress everyone since it can come off as somewhat derivative and rudimentary, but there’s something special about old stalwarts returning under a new name to shake things up in a game that they helped write the rules for. The Endless Road Turns Dark is, perhaps ironically, a shining spectacle and example for how newer doom bands that wish to capture the classic sound should go about doing so. However, if you’re looking for crushingly heavy drones and the ugly, funereal atmosphere of other modern doom bands, you may feel underwhelmed here.

When it comes down to it, The Skull are quite capable of turning out really solid work. It’s a testament to the expertise, knowledge, and creative drive that still burns brightly to this day in each member. Any fan of the melodic focus of classic doom would do well to check this out. This is without a doubt one of the strongest entries in the genre for 2018.