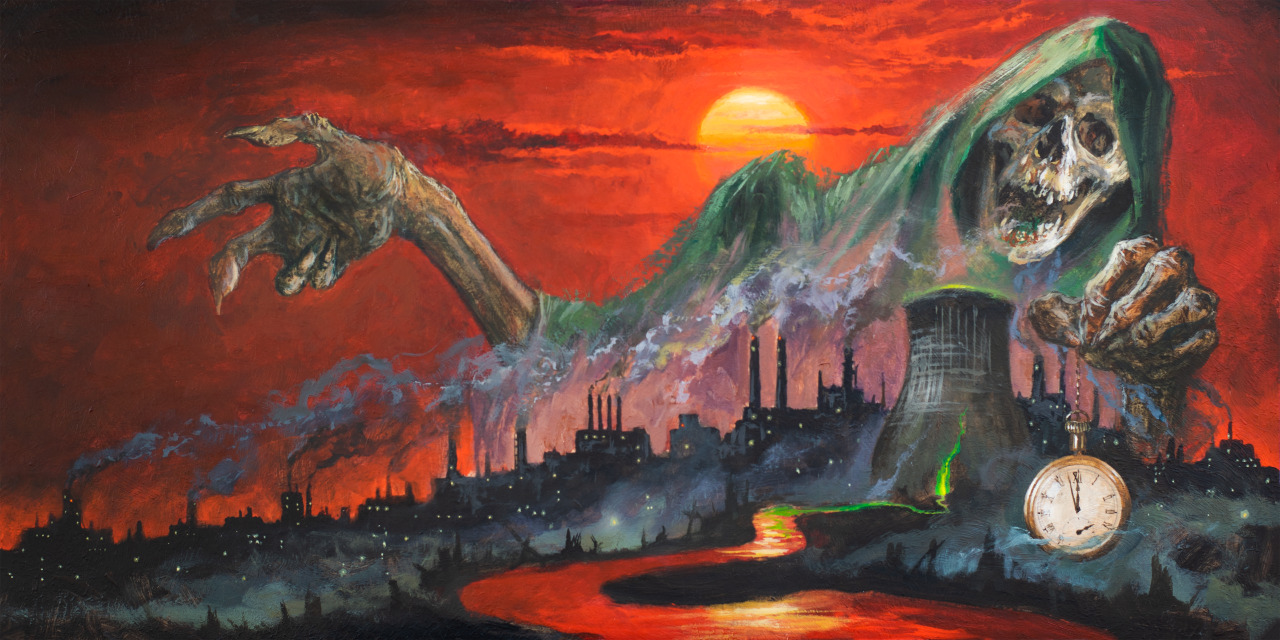 Times are undoubtedly rough and mordant, but so is the music that constitutes as a soundtrack to the global shitshow that is life. Terminal Nation are one of the latest additions to the bunch, presenting their own curious concoction of chafingly ominous death metal, with flavours from sludge and grindcore thrown in for good measure. Their newest effort, Holocene Extinction, runs just shy of 35 minutes, but sometimes that’s more than enough to deliver one’s message, especially when it’s inflated with such an unforgiving force and mien as theirs.

Generally speaking, old school death metal doesn’t speak to me as much as it maybe should on paper; I personally gravitate towards new innovations and personal angles rather than tepid warm-ups of the days of yore. That said, I still try to give a listen to everything even remotely interesting, regardless of tags or the preassumptions inflicted by them. Terminal Nation as a name started to pop up all the more frequently as the release of Holocene Extinction drew nearer, but I decided to wait until the full thing was out to give it a proper go. Fast forward a few weeks and I had to contradict myself because of said exposure and people’s reaction towards them. And, to be honest, my expectations for the album didn’t exactly plummet from there.

The severely pummeling, straightforward aggression and honest, gimmickless vision Terminal Nation offer is the kind that doesn’t occur very often. This became clear right from the first seconds of the first track, “Cognitive Dissonance”, and the notion doesn’t abate at any moment during the album. In fact, it only seems to strengthen until the fade-out of final track “Age of Turmoil”. Only then is the listener able to experience some sort of relief, although that momentary release surely comes to a halt after the urgent need to replay the whole thing arises. The compelling intensity of Holocene Extinction is remarkable, and simply put, one of the key points in making it such a striking record altogether.

As my opening ramblings might have let on, if you’re a fan of hatefully commanding musical violence, you’ll most likely find something to enjoy here. While the unmistakable winds of the past are certainly brushing your ear canals throughout, brushing Holocene Extinction off as another old school effort would be a travesty, plain and simple, not to mention a misunderstanding. Even though the production is mostly clothed in the skin of history, the songwriting itself features a variety of direct and implied influences from across the heaviest of metal territories, and the outcome is something quite fascinating. Said blend of different decades gives the hooks sharper ends, and adds a significant amount of weight to them. After all, there’s a reason to why some of those old bands and albums have managed to stand the test of time, and Terminal Nation have succeeded to tap into that primal source.

The menace-to-melody ratio is also very much in order – you can take the tracks “Arsenic Earth” or “Orange Bottle Prison” as examples of that. Or, well, melody might be a bit too harsh a word for the occasion, but whatever. The divisive guitar work sets a haunting mood, and you can hear digestable and memorable harmonies on nearly every track. Sometimes you can just submit yourself to the driving pulse and sporadic time signature and tempo changes lunging from nowhere, as in tracks like “Disciple of Deceit” or “Leather Envy”. I’ve always appreciated those individual moments of bliss and amazement that are eloquently sprinkled in here and there, and Holocene Extinction utilizes that ideal to a great degree, as even the little things that might seem abrupt at first add a lot of depth to the overall writing.

So all the fuzz and stirring surrounding this album is by no means far-fetched, as it checks pretty much all the boxes built around it. And even though an album like this is easy to describe as a whole, digging into it is worth every second, since you’ll most likely experience feelings that are normally out of reach for worded descriptions. I’ll probably continue steering clear from reliving the past through musical means, but if any of that reminiscence is anything like Terminal Nation‘s, then I’ll gladly indulge my daily aural enmity fix with it. Moving onward is necessary for all progress, but Holocene Extinction proves you can do just that and still be able to please the geezers while you’re at it.