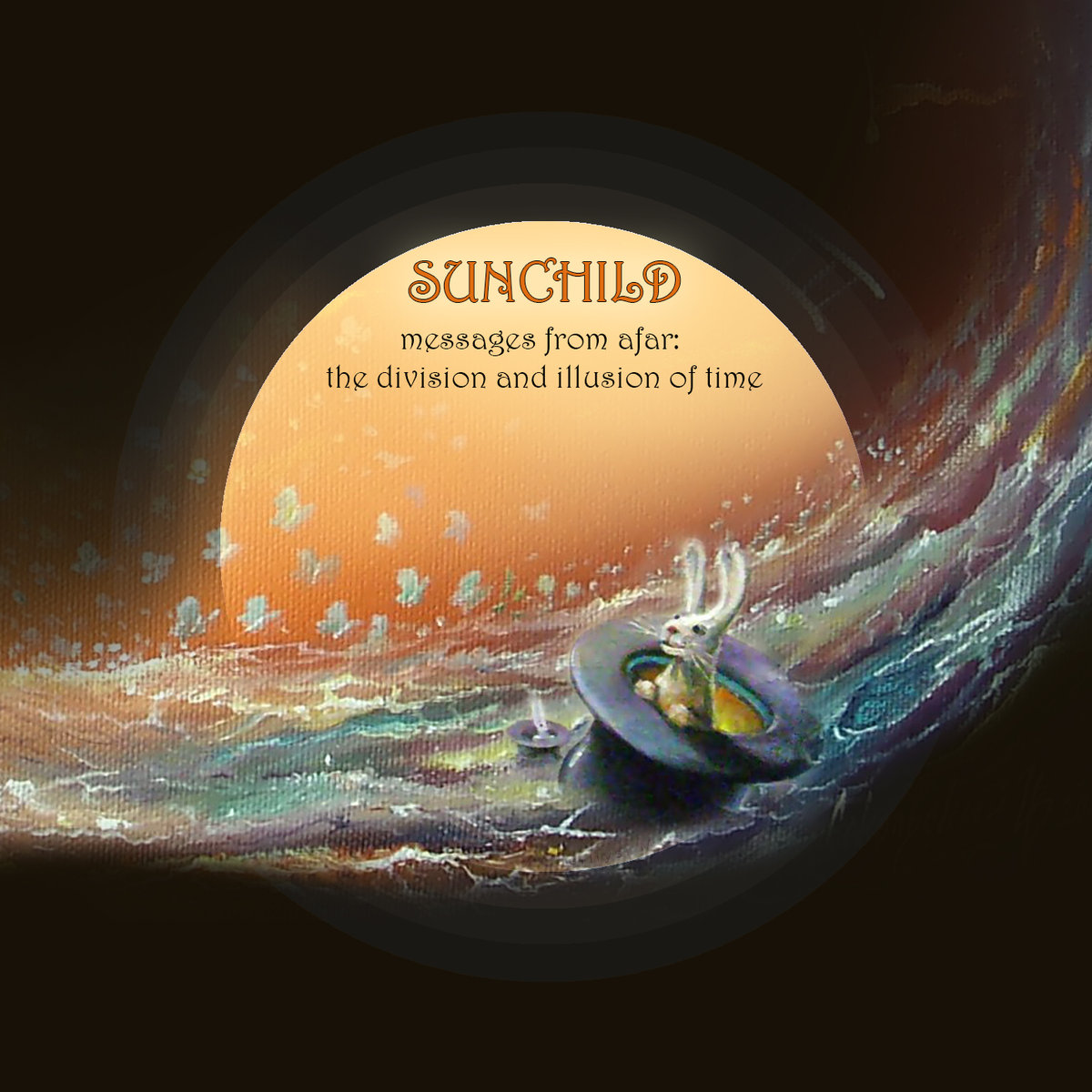 Sunchild – “Messages From Afar And Illusion Of Time”

There’s always room in my life for a good bit of highly produced, well played neo-prog. Messages From Afar And Illusion Of Time by Sunchild fits the bill, even with some over indulgent flaws.

Although the lengthy prog-tastic album title might make you think that the whole thing will be an overblown mess, Messages From Afar And Illusion Of Time kicks off with a perfect thick slice of prog-pop with “Searching Diamonds”. Huge, happy melodies soar, and the fantastic melodic guitars and keys sound epic alongside the upbeat drums and bass. In a nutshell, it’s neo-prog / power pop in the vein of Marillion or It Bites, done well.

The pop nature of “Searching Diamonds” means that within five minutes I was thrust straight into “Grail and Time”. Another melodic powerhouse, featuring swirling retro synths and catchy-as-hell melodies. The middle section is pure Supertramp. The stabbing Rhodes, combined with the naked vocal over the top, create that sound that we know and love.

Let’s get this out there. These two tracks are up there with some of the best that neo-prog has to offer. However, things do start to get a little more self indulgent from this point onward.

“60 Degrees To The 70’s” starts instrumental, and when the vocal does finally appear, the sensitive performance is great. It reminds me of some of the emotional tracks from The Sea Within for example. The female backing vocal on this one really adds a high level of polish. After a cheese factor 11 keyboard solo, the vocal returns via a megaphone effect and evokes Roger Waters at his bitter best. This track, however, is the first to show some fat around the edges. The instrumental section at the start just sounds out of place. The solos are also covered in so much cheese that even I felt that it detracted from the beauty of the arrangement and the vocals.

It’s at this point that the combination of the self indulgence, and the too ‘on the nose’ influences from other bands, was too much for me. “Mystery Train” and “Dreams From A Lonely Town” are both mostly instrumental pieces. They both feature the prerequisite Floydian slow guitar, drenched in reverb and atmospheric, laid back grooves. They work within the context of the album format, proving good variation, but they ultimately feel like interludes that detract from the earlier, more focused, efforts. The darker ending on “Dreams From a Lonely Town” does herald a change of tone and pace for what is yet to come.

IT’S NOT A REAL PROG ALBUM WITHOUT SOME EPIC LENGTH TRACKS, IS IT?

“The Division and Illusion of Time” is the first longer format piece on the album. It does successfully combine some tasty guitar work and parpy-synths, with some darker orchestral moments towards the end. However, the melting pot approach feels a little disjointed in places.

“Victory Voyager” is the main epic on the album, and I was looking forward to what the band could do with the longer, 20 minute format. It’s darker, more brooding than what has come before. The whole piece continues to mix together the now familiar influences (Floyd, Marillion), which can get a little obvious. Within this framework, it offers up many different sounds and timbres, from intimate vocal sections, to chamber music style sections. The ending section, in particular, is worth waiting for. Even with the quality of each section, this longer format highlights some limitations. The diversity of styles, and meandering natures of the whole track, feels bitty and disjointed at times.

“Father” tops off the album and is another instrumental, and seems a strange way to finish off the album, especially given the epic nature of the previous track. It does feature some superb guitar, classical piano and a violin, but sounds a little like an afterthought at this point.

FROM POP TO PROG

Antony Kalugin is the brainchild behind Sunchild. With Messages From Afar And Illusion Of Time, he’s definitely crafted a tour-de-force of an album. It does wear its influences on its sleeve too obviously at times, which detracts from the more original moments. Even so, the sheer power of the melodies, fantastic playing, and great vocal performances, make the first half of this album a thoroughly enjoyable experience. If you have the same immunity to cheese that I do, it’s hard not to like this album. The band describe Messages From Afar And Illusion Of Time as big, bold bright, warm, melodic prog album. I couldn’t have put it better myself.