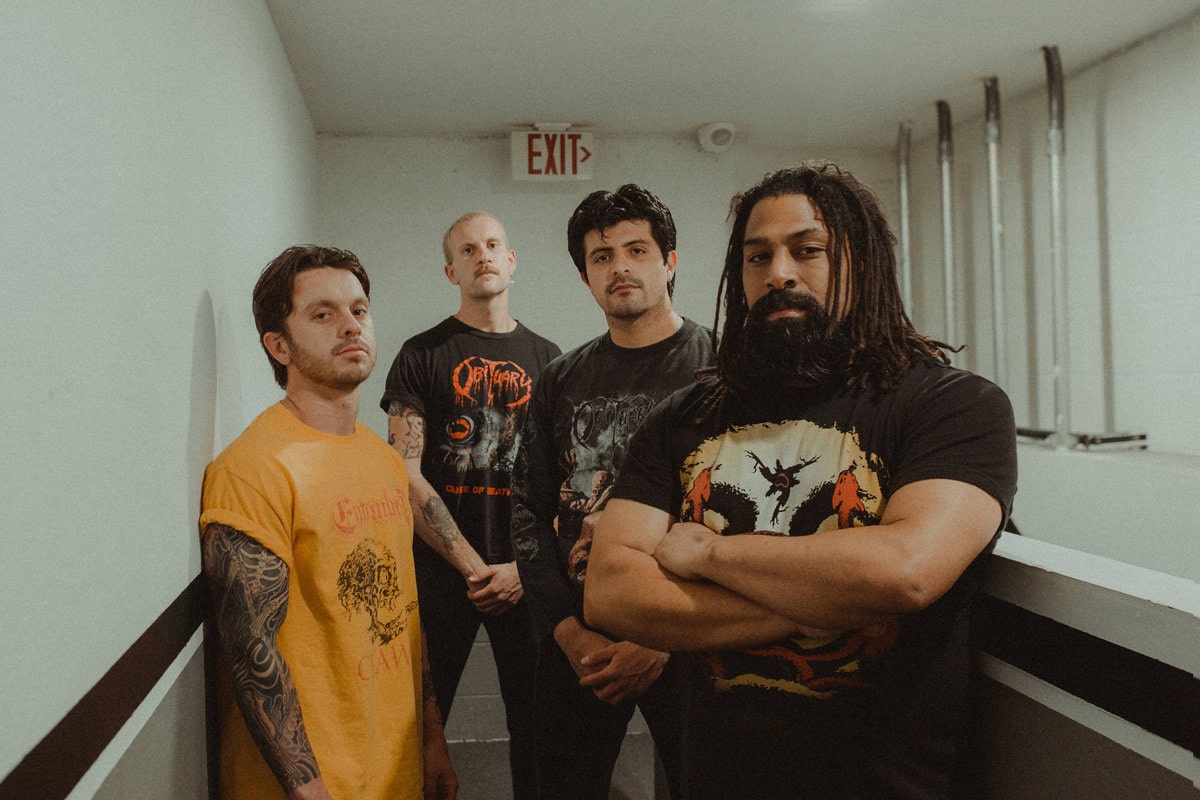 Slowbleed fuck shit up proper with their debut The Blazing Sun, A Fiery Dawn.

Slowbleed sound like an old school act. Starting with a 47 second solo that sounds straight out of early thrash days, these dudes rip through 30 minutes of fist clenching riffage that can easily soundtrack whatever shit you want or are going to get into. Their crossover borrows between thrash, hardcore, and death metal and finds the sweet spot, then proceeds to exploit the hell out of it to great effect.

I can’t get over just how fun this album sounds. Self seriousness is such a disease in the metal scene that it’s hard to like music that’s good due to the zeal of ‘I AM SO FUCKING SERIOUS’. It’s hard to pinpoint just by listening, but you can definitely start to pick up on the subtle nuances with enough eventual listens to begin to tell the difference. Slowbleed walks the fine tightrope of developing a raucous energetic sound that should be taken seriously, but also an element of comradery, and approachability that keeps it fun. It’s comparable to Power Trip (RILEY GALE FOREVER), Municipal Waste, and Iron Age. If you’re not familiar with any of those crossover acts, you should be, as they’re the leading charge of why crossover is thriving today. Slowbleed successfully matching their energy on their initial release is a feat in itself, and this five piece definitely has what it takes for longevity in the crossover arena.

“Ice Cold Odyssey”, “No Shepherd (Of Wolves)”, and “Hung at Dawn” all showcase Slowbleed’s strengths. As a unit, this band is pretty tight knit. Their chemistry is heightened with each of their playing capabilities. Although sometimes it sounds like they’re cramming too much technicality into one song or the other, it all harkens back to a felt connection that comes across like a group of friends jamming the fuck out together in some living room somewhere. That energy is definitely beneficial, and keeps me coming back for replays.

The shining gem on this release is “Sangre”. From end to end, that track exhibits what Slowbleed does well. The technical guitar work of Logan Givan is on full display with its relentless contentiousness, as Jon Stephenson growls with just enough clarity, but not dirty enough for it to be muffled. Everything comes to a bad ass solo that shifts into the slow breakdown. Ozzy Parilla’s bass work edges out the track with the crustiness it deserves as it shifts from thrashy rager to the break-shit-slowly-breakdown. All of that is on top of Tyler Castros’ solid drum work, and the entire track just pushes to a decent place of revelry for anyone who’s a fan of crossover, and proves to others why you should be a fan of crossover.

The final tracks are rather lackluster. “Driven by Fire” sounds like it was straight ripped from the days when every groove metal band was making moody down tempo rippers for their lead guitarists to solo the fuck out on. I’ve never been too keen on those types of ballads. I haven’t seen a band pull it off effectively, and the juxtaposition never really mixes well. It creeps into “Cemetary Gates” territory, and I might have PTSD from hearing way too much Pantera growing up in their home state (and them being pretty terrible in general in retrospect). I shouldn’t hold this against Slowbleed, though, since they do pull it off with cohesiveness, and if you’re one of those that are into the ’90s era slow groove metal track you’ll probably really dig it. Also, I give props for John Stephenson for not steering into the cheese territory. That’s usually hard to do, and definitely something those singers from the ’90s couldn’t ever do.

“Graves” is a better shot at a mid-tempo sludge riff banger that has a decent energy to it. It would be an awesome closing track if it weren’t for the last second which the recording just cuts off. That may sound nitpicky, but when listening the singer is mid-word before the recording just stops. It’s rather obvious and just leaves me frustratingly curious.

As a debut effort it’s a solid effort. Any missteps are rather inconspicuous, and reflective of minor tweaks to their overall approach. The organic energy flows through these tracks with a concise adhesive that reflects how important that bond is. An added textual layer of the proper production, and this thing is just fucking fire even if the closing tracks are slightly lackluster. I’m not an expert on audio engineering, but it sounds like they recorded this as a unit, and gives it the crusty edge it needs and deserves. All of that makes it a decent fucking debut album. A few wrinkles doesn’t ever deter me from my commitment to listen further, and with everything they did right on this album it’s really hard to justify ignoring this release, or any subsequent attempts from Slowbleed.