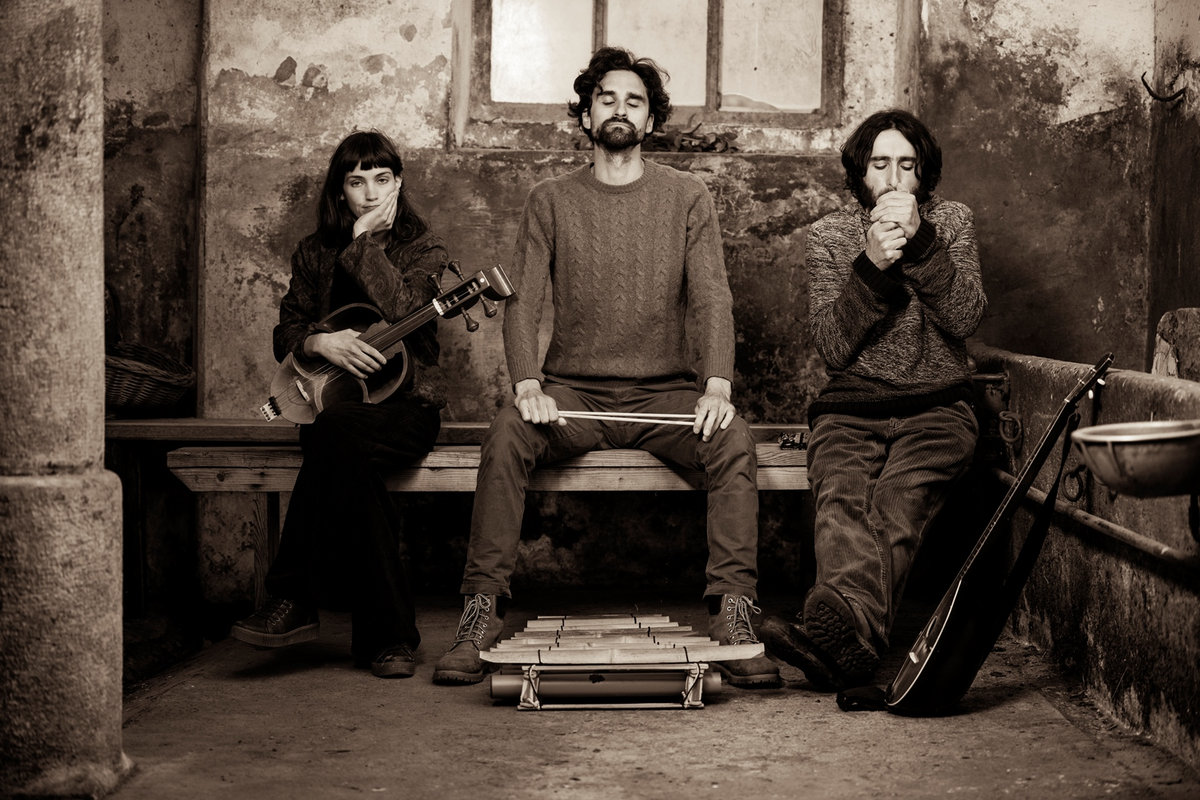 Širom – “A Universe that Roasts Blossoms for a Horse”

By Robert MiklosSeptember 19, 2019 No Comments

Širom conjure worlds that do not exist in a fashion that feels all too real. With a unique sound, they plunge listeners into a meditative trance that evokes states never before witnessed.

Širom is a young trio from Slovenia. They craft music that aims to transcend stylistic barriers and many other kinds of artificial boundaries. It would stand to reason that a band that employs an array of instruments that reaches from the hurdy gurdy, violin, viola, ukulele, flute, and harps to ribab, kalimba, bendir, balafon, tamburica, qeychak, and sound objects would care not for trivial things such as the limitations of a certain style. This poly-valence gives the group strength, but also their uncompromising vision, led with great spirit throughout. Širom not only want to but successfully bridge the gap between that which is and that which isn’t.

A Universe that Roasts Blossoms for a Horse is the band’s third and latest album. Expanding on previously mapped territory, it stretches into an otherworldly wilderness. Much like ancient explorers whose minds were filled with thoughts of magic who embarked on a journey of discovery with hearts full of glorious courage, the band reveal textures that enthrall and charm the listener. Although the record runs for approximately three quarters of an hour, if one is fully immersed into its essence, it can feel like an endless voyage.

The album doesn’t rely on any sort of guiding thread, or any conventional means of direction really, while manifesting itself. Instead, it relies heavily on slowly evolving meditative textures, which create a deep and rich nuance within the fabric of the aural cloak donned by all the band’s members. “A Washed out Boy Taking Fossils from a Frog Sack” greets the listener with a slightly unsettling drone, accented by sharp cymbals and odd percussive spots, above which a ghostly yet beautiful voice drives everything forward. There are some vague Middle Eastern vibes that transpire, as if they’re being witnessed through a dream within a dream.

“Sleight of Hand with a Melting Key” continues the action with a minimalist, polyrhythmic acoustic lead expanding ever so slowly and progressively. Voices ooze, wavering on top as the texture unfolds, and then, at one point – suddenly wooden percussion breaks in. This oddball percussive solo takes us away from wherever we were for a short period of time, before letting some dronin strings take over, only to then accompany said drone after a brisk break. Akin to wandering through a desert besides a mountainous area in a land unknown, under a colorful sky, this patch of sound marches tactfully ahead. Along with the ending section, it lends some subtle clues as to where we may be; however, aside from a weirdly altered Eastern music kind of aesthetic, all these eerily familiar soundscapes remain fathomless.

“A Pulse Expels Its Brothers and Sisters” comes with some almost tribal-sounding percussion, taking us back in time. With no time to digest this, the song lunges into an unsettling and somewhat shamanic sound, which also doesn’t linger on for long. From there, we proceed into a trance-like ambiance that whispers echoes of Indian music into a blend that’s one of a kind. The final segments gently seep into our next song, “Low Probability of a Hug”, which livens up things a little with a more structured approach and a more energetic delivery, while still maintaining the established laid-back tonalities. It seeks to remind us of where we have been, without any intention of taking us forward yet. Through this reminder I believe it beckons us to try and not forget where we have been.

“Same as the One She Hardly Remembered” is our final destination. Throughout the song, that aforementioned eerily familiar trait returns, albeit in a different time and space. It almost feels like it is the output of a vision more than the sound of a place or time. Even more gently and more structured than before, our final walk through these realms sends a friendly yet distant wind in our path, which gently caresses the heart.

A Universe that Roasts Blossoms for a Horse is a splendid display of musicianship, a product of a unique aural vision. For a band so young to have such a neatly tied and crystallized identity is truly remarkable, even more so considering the plethora of sounds that is sprung to life by the trio. About Širom, it would be more apt to say that they do not take the listener somewhere – they bring that ‘somewhere’ to the listener. That is a sentence I would have never imagined to have written about any artist, yet here we are. Words cannot do justice to what this band does, so I’ll leave it to each of you to draw your own conclusions.

A Universe that Roasts Blossoms for a HorseAvant-GardeDroneexperimentalFolkfusionImprovisationJazzŠiromSloveniaTranceWorld