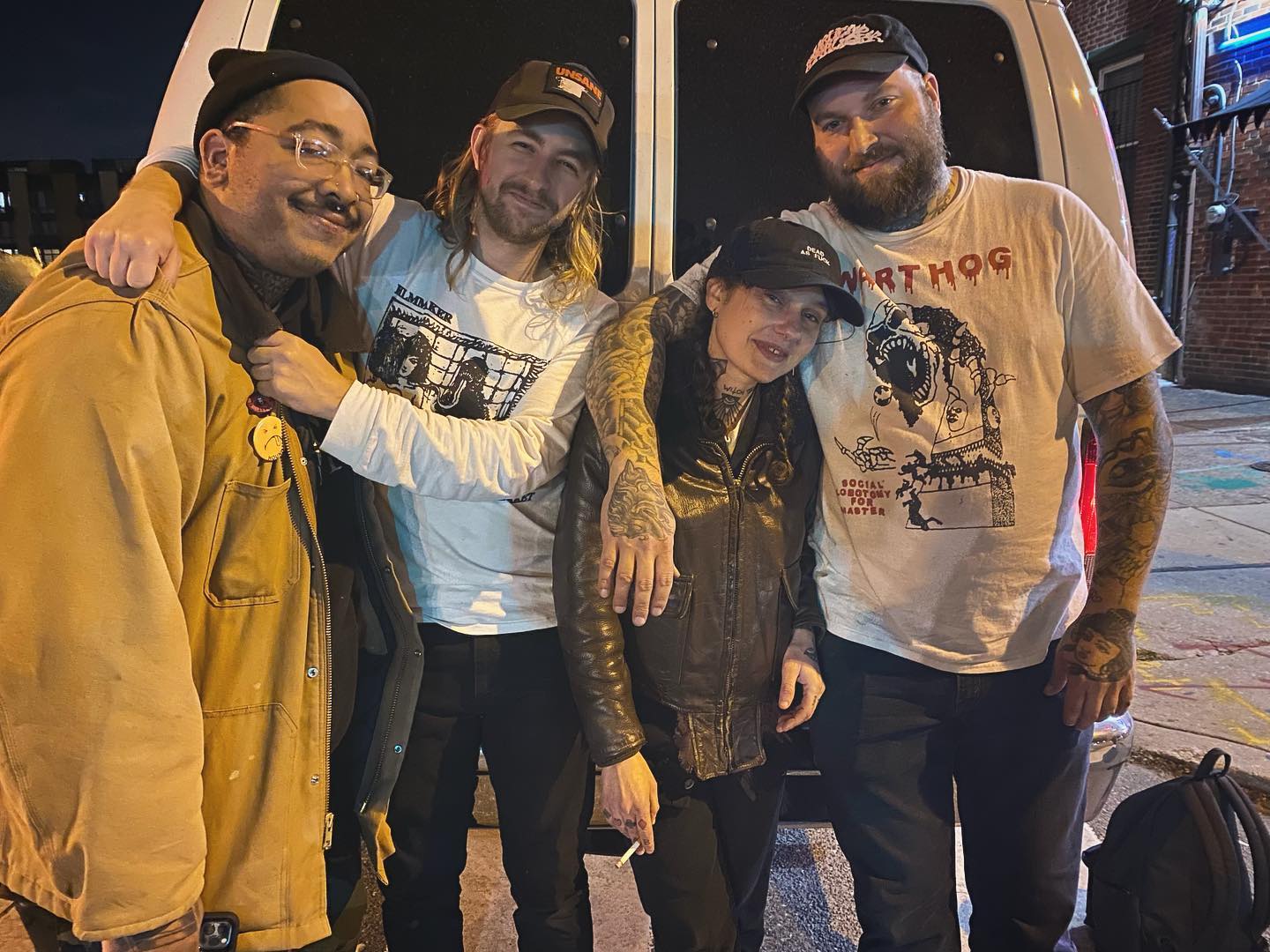 By David RodriguezDecember 27, 2021 No Comments

Rid Of Me bring some prominent members from Philly’s well-established punk rock scene together to make a feeling, tattered, and personal album

PJ Harvey tribute band? Not quite, though it’s obvious the name of this grungy noise rock band is lovingly derived from the classic album by Harvey. I’ve been waiting for this ever since news broke of their forming. See, Rid Of Me are a rumbling underground supergroup – it has Itarya Rosenberg from Legendary Divorce and Low Dose (who I reviewed a while ago) on bass and vocals, Ruben Polo from the inimitable SOUL GLO (also reviewed a bit ago) on guitar, along with Mike McGinnis also on guitar (and also head of Knife Hits Records), and Mike Howard of Anxiety Spiral on drums.

Formalities and personal excitement aside, you don’t have to have any of the background to enjoy Traveling, though it does help to have an affinity for punky garage rock with a ’90s flair. It’s a sound I admittedly didn’t grow up with as it was a bit before my time, but I’m retroactively exploring it and regularly get into bands that retrofit this sound with modern accoutrement like Rid Of Me do. Honestly, I’d listen to anything Rosenberg and/or Polo do anyway, so here we are!

It makes for a faded, reflective journey, though reflected from a street puddle of oil, rain water, and… other stuff – a sort of indictment of existence. You need not look much further than the cover art, adorned with washed-out photos of cigarettes straddled by fingers and waiting to be dragged on, a feeling of listlessness jumping off the photos. It’s rough and defeatist to a degree; I interpret that as a desire to not only to shave the days, weeks, and months off of your own existence in a bid to end the monotony sooner, but also to cope with the time you are here. I imagine nothing does that like a ciggy. I’m not judging either, we all have our vices – do your thing.

Traveling is also not a clean album. Modern conveniences have only brought Rid Of Me so far. Production is gritty which lends itself nicely to the vibe. Still, every instrument is perfectly audible here. Bass is buzzy, vocals are at the front, but not so much that you can’t make out each individual punk-laced and at times sludgy guitar riff and snappy drum pattern which points to a great mix. The haze that layers all the music is charming, but doesn’t suffocate. This album is also light on hooks and traditional choruses, but that doesn’t mean there’s no risk of it getting stuck in your head.

“Travelling” (note the extra ‘l’) is a prime example of how good this album sounds with its higher energy and pronounced melody. Mid-tempo is where Traveling perhaps shines the most – “Myself”, “I Don’t Wanna”, and “Broke Shit” all rip. So catchy. Rosenberg’s vocals are often fierce – grating the throat perhaps, but not the ears – really projecting it out there like she’s playing an outdoor show and her mic broke. “Spilling” is the fastest track on the album and really kicks you in the dick with punked-up, riot grrrl-esque energy with lyrics of uninhibited sexual desire with a rabid edge. There’s likely a metaphor I’m missing out on, but I get the feeling it’s about toxic love and lust, living in the moment to feel something other than numbness, even if it’s next to someone who clearly isn’t good for you.

Rid Of Me are quite content to slow things down though. “23” is a nostalgic track, a first-person tale that seems broken up by faded memories, yet there’s an honestly in the details that are there. Fulfillment and comfort comes as Rosenberg sings ‘I’ll laugh with whoever gets me stoned‘, but becomes fleeting when ‘laugh‘ gets changed to ‘cry‘ when the line is repeated at the song’s end. “Fun” starts slow and low enough, but builds to an eruptive frustration with the inevitable and how ‘esoteric‘ love seems to be. The instrumentation is equal parts melancholy and fervent, stirring up a lot in a little time.

I just enjoy how immensely personal and rusted it feels, in terms of its perceived age and how decayed its surroundings are. Rid Of Me hail from Philadelphia and while I’ve never been there, I imagine it sounds like how it feels to live in a rotting urban environment like that (much like Denver, which I am acutely familiar with). Itarya’s Instagram page (NSFW) is filled with photos of disarray, spills, and messes likely found around the city and that aesthetic seems to inform the grit of Traveling, though with less grime and more heart. Her vocals alone are a wonder, practically made for this sound, and her friends are wholly adept at filling out that sonic palate to make a great punk album that doesn’t feel stilted or cold.

After Low Dose, Rid Of Me feels like a natural evolution, a progression and hamstring-tearing step the likes of which birth memes. I’m so glad they were able to release an LP soon enough after forming and putting a couple EPs out, one of which has a quite serviceable slowcore-esque Sheryl Crow cover. I hope this is another venue through which for Itarya Rosenberg to vent, feel, and purge, serving up some of the most emotive, noisy, and melodic music in this vein. Traveling wants more because it has been fed less its whole life. There’s a longing attached to it, like nothing’s right for any substantial period of time if at all, always having to settle for what’s easily obtained. Luckily for me, the album itself doesn’t make me feel like that at all. It’s exactly what I wanted, perhaps needed.