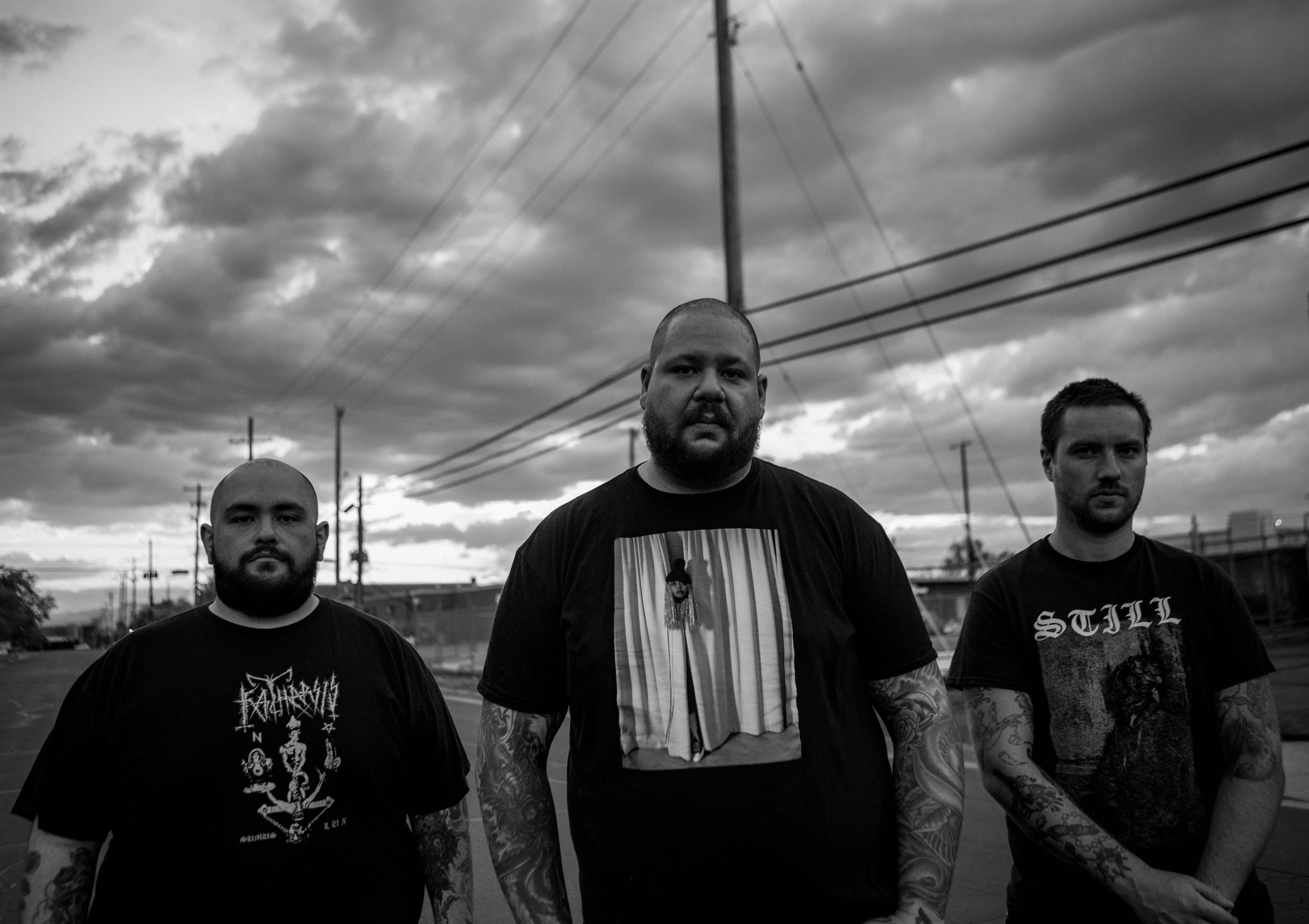 By David RodriguezAugust 7, 2020 No Comments

In a world where the abyss is all too ready to stare back into you when confronted, so too do Primitive Man reflect the true suffering and ire of humanity with uncompromising, dense doom.

You see a lot of people refer to Primitive Man as one of the heaviest bands out there, and while I don’t like to get too lost in contests like that, yes, those people are absolutely fucking right. It’s not enough to be heavy, but you also have to stay heavy, and Immersion is just about as relentlessly heavy as they come, interpreting some very weighty topics and themes with their equally weighty music.

The Denver trio dredge unassailable doom-sludge from the most abyssal depths, ones unknown to humankind’s sensual perception, but felt internally during the worst of times. It’s uncommonly dense, as if coated in corrosion and rust several inches thick. Its only colors are various shades of grime-encrusted black, robbed of all vividity, seemingly absorbing all nearby light until all is sunk into inescapable shade.

It’s the creeping, pervasive thoughts of failure. It’s a downward spiral into personal madness that only vocalizes in deep screams. It’s the lack of a will to push forward, only because you’ve exhausted yourself into an anxious puddle from pushing against that which won’t move and the walls are closing in. Where some are privileged enough to not have to regularly contend with a mental darkness like this, Primitive Man make you confront a sonic manifestation of it.

The guitar is barely registered as such – it’s more of a constant drilling that burrows into your head. Seriously, there’s not a moment on this album where it takes a break. The unbreakable guitars from Ethan McCarthy are only outdone by his vocals. They’re malignant, toxic, and uncomfortable, tracing a human state that can’t be replicated without a severe degradation of gentility. True to their name, the band enact a violent, primordial tone, one conducive to raw and unchecked survival – dog eat dog, man versus man. At least that’s what we’re told.

With an approach like that, where do you even begin? The descent is quick and harsh, but your stay is supremely slow. As time itself crawls, as do you through the unyielding sludge trenches of “The Lifer”. “Entity” is a slow-motion death trip where you’re acutely aware of your demise, yet you’re forced to watch it unfold in excruciating detail, all while the lurching drums from Joe Linden mimic the labored and strained beats of your heart.

“Menacing” is made all the more, well, menacing with its fitting video of a man breaking down to his most primal state of kill or be killed. In this instance, the stakes are all too real – does the man, a masked frontline worker at what appears to be a thrift store of some sort, become killed by his boss (likely metaphorically with the weapons of class and wage slavery), or does the worker exact revenge on him for the already mounted abuses of power and rank that degrade and dehumanize? Sure, you may see the murder of the boss as the most base human instinct possible – uncivilized, unforgiven, and brutal – but what of the crimes of capitalism, or abject poverty brought on by systemic oppression?

Although “Menacing” is the track you can most associate with metal as a sound and approach due to its dirty blast beats and more frivolous riffing, “Foul” is where things get really interesting. Masked in doom, the song leaves a trail of howls, pained and desperate from profound betrayal. You can hear the vibration of Jonathan Campos’ low-end in the base of your skull as the instruments plod through a coarse, caustic muck, slowly sinking down in a blackened mire that could only boil forth from hell itself.

As McCarthy said himself: ‘now you’re a grown man and you’re fucked.‘ The most disturbing part of the essence of Primitive Man‘s music isn’t so much that it lives in all of us, but that it is a reflection of reality. It can be wielded by people to bring great despair to others. Some command it in corrupting ways, to keep oppressive boots on the necks of the marginalized, to stay in a position of opulent power while others rot in the gutters, or just to ensure that they have the biggest slice of the pie. As more and more people are ravaged one way or another by our societal and political ills this year, this album comes at a time when we are apt to let the darkness consume us, but eventually we must swim to the surface and fight our way out somehow.

At 35 minutes, Immersion is about half as long as the band’s last album, Caustic, but twice as purposeful. It’s humanity unfurled, a premature autopsy on the voids that consume us on all levels, splayed out via standard Y-incision. The scariest part? The voids are simple reflections, our own self-made reckoning as a species – Primitive Man only provide the mirror. Look into yourself. Look to your neighbor. Look at the people that claim to represent you. Look at the man-made systems and power structures. Find the poison that ails us at every turn and eradicate it.

As a final note, Ethan McCarthy was part of a panel on racism in the metal scene on The Pit‘s talk show, Last Words. He was joined by Fever 333‘s Jason Aalon Butler as well as author Laina Dawes, moderated by Cat Jones. It’s an enlightening, refreshingly frank conversation that’s been one of my favorite watches this year, and as cool and important as Primitive Man‘s music is, this is even more so. Check it out.