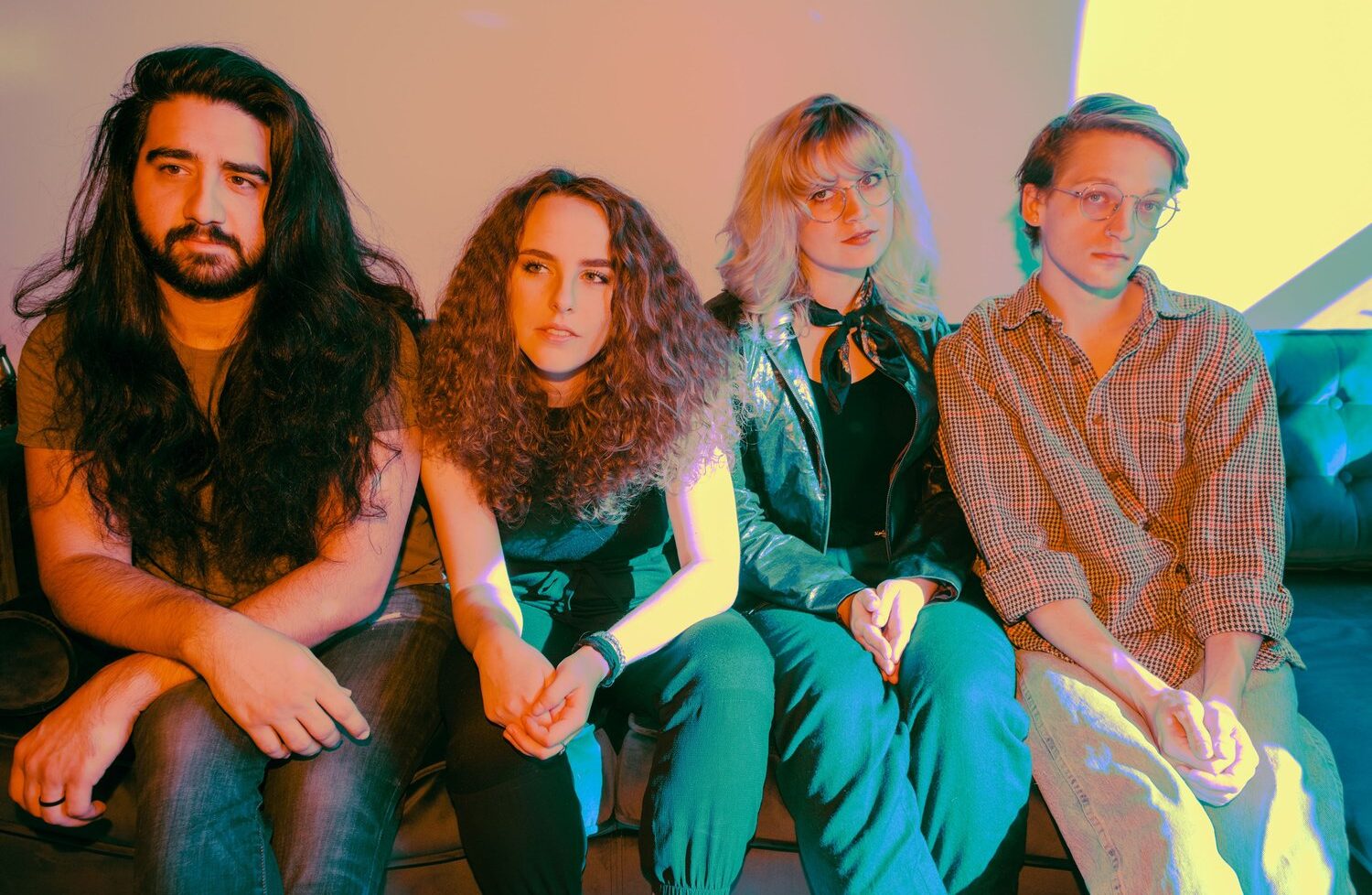 By Carlos Vélez-CancelAugust 18, 2022 No Comments

Pool Kids hit an exponential stride with their sophomore self-titled record, offering a candid set of alt/emo songs that shine from their emotional power and musical cohesion.

‘So here we are on this stupid couch again.’

There’s something about a couch that evokes a sense of simmering tension. Its worn-out façade and broken couch springs waiting for its owners to sit down on it and finally have that uncomfortable, albeit long-overdue conversation, or simply witnessing them exchange a troubling silence – coupled with one or two awkward glances at each other – for the hundredth time. This piece of furniture feels familiar yet, unbeknownst to us, withholds a power that sets some sort of precedence for change to eventually occur. Pool Kids, the self-titled sophomore record from Floridian alt-rock act Pool Kids, forces us to sit on that very couch and experience the trials and tribulations of keeping quiet, and the transformation that takes place when breaking out of it, all the while gracing us with some of the finest and most cohesive songwriting 2022 has to offer.

Much like the album’s artwork, Pool Kids lays out shades and hues of disillusionment channeled through a collection of tracks that gravitates towards being real to others and to oneself. There is a cyclical trauma embedded in each of the song’s characters that comes from a place of avoidance and holding back (and the consequent process of letting out), with the instrumentation translating these conflicting emotions to a T. “Conscious Uncoupling” starts off with a dynamic song structure giving way a desperate account of dealing with unaddressed issues and the habit of not recognizing them. The song fluctuates between wistful contemplation through melodic guitar leads and gentle piano flourishes, pummeling rhythm passages that signal pent-up anger about to burst out, and soaring vocals expressing sardonic but ultimately bitter disappointment.

With such a difficult subject to tackle in and of itself, the band seemed fit to modify their already great blend of emo, alternative, and math rock sound – found on their debut full-length Music to Practice Safe Sex To – into something more refined. The result is a record that demonstrates patience without sacrificing urgency – a record that, ultimately, is not afraid to tell things how they are anymore, all possible through convincing compositional storytelling.

“That’s Physics, Baby”, with its bouncy riffage an earnest vocal performance, triumphs in its declaration of self-worth through its refrain, ‘I’m telling you what I need‘. The record’s main single maintains this upbeat, almost jovial attitude throughout, only contrasted by steady verses that juxtapose with its rather confrontational delivery. Conversely, a track like the midwest emo rager (and conveniently titled) “Couch” sees the confidence found in that song – and others on the album – at odds with a residual powerlessness from having tolerated the pushes and shoves of the uncertainty of it all. You also get “Comes In Waves”, serving as a synthesis of sorts for the previously mentioned tracks and highlighting the band’s more matured approach to songwriting, climaxing with one of the most hard-hitting verses of the record:

‘I am the dirt that keeps them buried in the layers of the earth
The searing bulb that prays they never see the natural sun
I am the green of every sepal holding fertile blossoms shut
The bind of every grip around the bases of their ripened stems
But when they bloom, they look so precious
But only by my side.‘

By now, you can conclude that Pool Kids is an intense breakup record, and there’s no denying that. Even so, the band were able to transcend that and provide an album that touches, on a broader scale, upon other subjects such as co-dependency, isolation, and the way we interact with others. Tracks such as “Talk Too Much” and “Arm’s Length”, for instance, speak of the absurdities encountered in online spaces: the former stands up against the internet saviors with questionable pasts and their pompous brand of performative activism, while the latter tackles the frustration of maintaining an online social life through overwhelming group chats.

As I had previously mentioned, the album is an excellent sonic representation of the nonlinear musings presented by the tones and moods portrayed in each song. The glistening melodies and commanding drumming on “Further” continue the seeping clarity of breaking out of an emotional standstill and accepting the current state of things, only to once again latch onto selective memories through the hauntingly layered ballad-turned-atmospheric alt-rock cut “Waking Up”. The tight grooves and overall sporadic production on “Almost Always Better (Almost Always Worse)” match the unapologetic sentiments of the lyrics, making for quite a proggy spectacle in the best way possible. That being said, Pool Kids have such a lovely chemistry together that they’re able to craft ridiculously fun tracks, regardless of the topic at hand – look no further than the electrifying and made-for-stadiums number “Swallow”.

Pool Kids achieved a milestone with their self-titled record. It’s a leap of faith that will surely catapult them towards bigger horizons thanks to their consistent showcasing of honesty, confidence, and vision. Do not let the fact of Pool Kids being a sophomore release instill any type of hesitation, for it is a complete experience brimming with character and absolutely kickass tunes. Having had them on my musical radar for a couple of years now, it’s great to see a band like them take off and continuously push boundaries in such a fashion, and in such a short timespan, too. If this is any indication of what Pool Kids has in store for the future, then I don’t think we will be ready when the time comes.