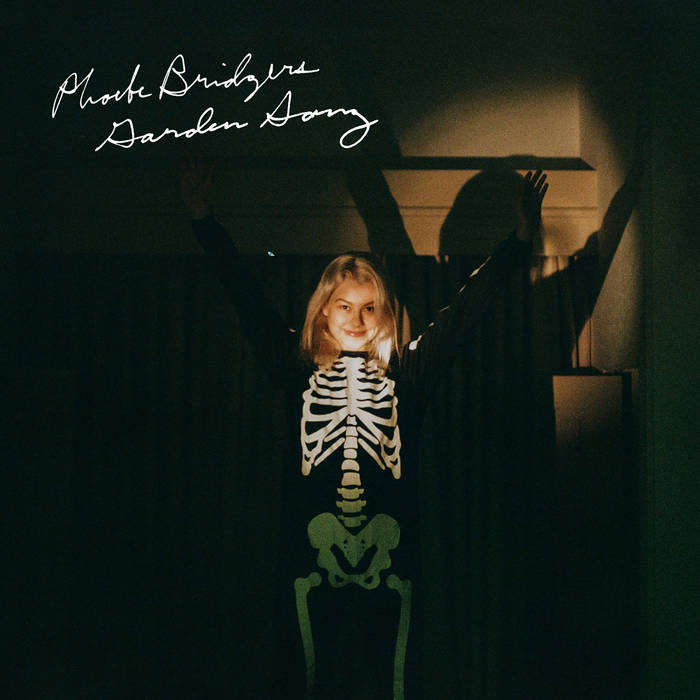 On her second full-length album, Phoebe Bridgers carefully curates moods, sounds, and even voices in a vivid, moving gallery.

Punisher begins and ends with cinematic excess, finely strained through Bridgers’ reserved, personal apocalypse. It’s not a reinvention of her sound, but it feels like a huge step forward for a musician who has spent the last several years taking huge steps. She’s a rare artist who can bring enormous personality to collaborations that nevertheless sound cohesive, alive, and honest. Boygenius and Better Oblivion Community Center were examples enough, but Punisher brings back those and other collaborators for a masterclass in collaborative songwriting, production, and performance.

Punisher begins with a song called “DVD Menu”. It’s a dark, textured string mediation with a haunting melody that will return by the end of the album. It feels like waking up at 3am, TV on, disoriented and overwhelmed, and it ends abruptly, leaving an eerie atmosphere that sets the tape-reverse guitars of “Garden Song” on an uneasy tilt. Punisher is full of songs that influence each other like this – bleeding into each other or bouncing ideas back and forth. “Garden Song” opens with violence, as the narrator buries a skinhead in a garden and reflects on what grows. There’s an anxiety about inevitability here, balancing between optimistic manifestation and a caustic reality. This anxiety is magnified on the title track where the narrator, first bored by meeting fans, suddenly fears that she would bore her heroes too. She paces anonymously through 24-hour drugstores to stay out of Silverlake bars.

Inevitability and choice remain themes throughout the album. “Halloween” presents a hopeful thought, insisting that ‘We can be whatever we want‘ even in the midst of chaos and violence. However, “Chinese Satellite” pushes back, rejecting faith and predetermination in a strikingly fatalistic acceptance of simple reality. “Moon Song” idealizes a relationship despite the visible trauma, and is immediately called out by “Savior Complex”, which abjectly names the beast and succumbs to it, ending with cinematic strings and hope.

Punisher displays an incredible array of musical texture, from the fuzzy lo-fi guitars of “Garden Song” and “ICU” to the delicate, string-heavy atmospheres of “Halloween” and “Moon Song”; “Kyoto” is filled with soaring horns, and “Savior Complex” is a delicate waltz. Even with all this variety, the last two songs on the album feel startlingly different. “Graceland Too” introduces a completely novel aesthetic, buoyed by Sarah Watkins’ plantive violin. Guest vocals from Julien Baker and Lucy Dacus fill out a lovely, adventurous song. The harmonies at the end are particularly good, as the trio layer their melodies in a round. It’s a hopeful, optimistic, and harmonious song. Like so many moments of optimism, it’s a marvelous set-up for the impending climax.

“I Know The End” starts with a very familiar feel, even calling back to the dog with a bird metaphor from “Moon Song”. The entire first half of the song is this personal self-reflection, and when the tempo suddenly changes, it feels like looking up and seeing your surroundings clearly for the first time. The sudden clarity and freedom is striking – the narrator has spent the song regretting and self-isolating, repeating ‘I gotta go‘ until she finally just drives away. She tears through the discordant American South, and right up to the edge – for a moment, we are dancing into the apocalypse, joyously screaming that ‘The end is here!‘ The horns build and then burst into a half-time choral wall of sound, build again, and are instantly subverted by the desperate, silent scream that abruptly ends the album. Bridgers has once again rejected the premise, determined to stare directly into the void.

There’s something about Bridgers’ self-conscious sarcasm that is easy to see as humor – it goes with the reference-heavy song names and lyrics – but the end of “I Know The End” is something different. Bridgers likened it to My Chemical Romance’s “Welcome to the Black Parade”, and comparisons to Beirut or Arcade Fire aren’t amiss either, but what really sets it apart on this album is the clarity of sincere, emotional release. Much of Punisher is delicate to the point of withdrawal, and it’s not until the melody from “DVD Menu” returns on soaring, triumphant horns that you realize it’s all been building to this.