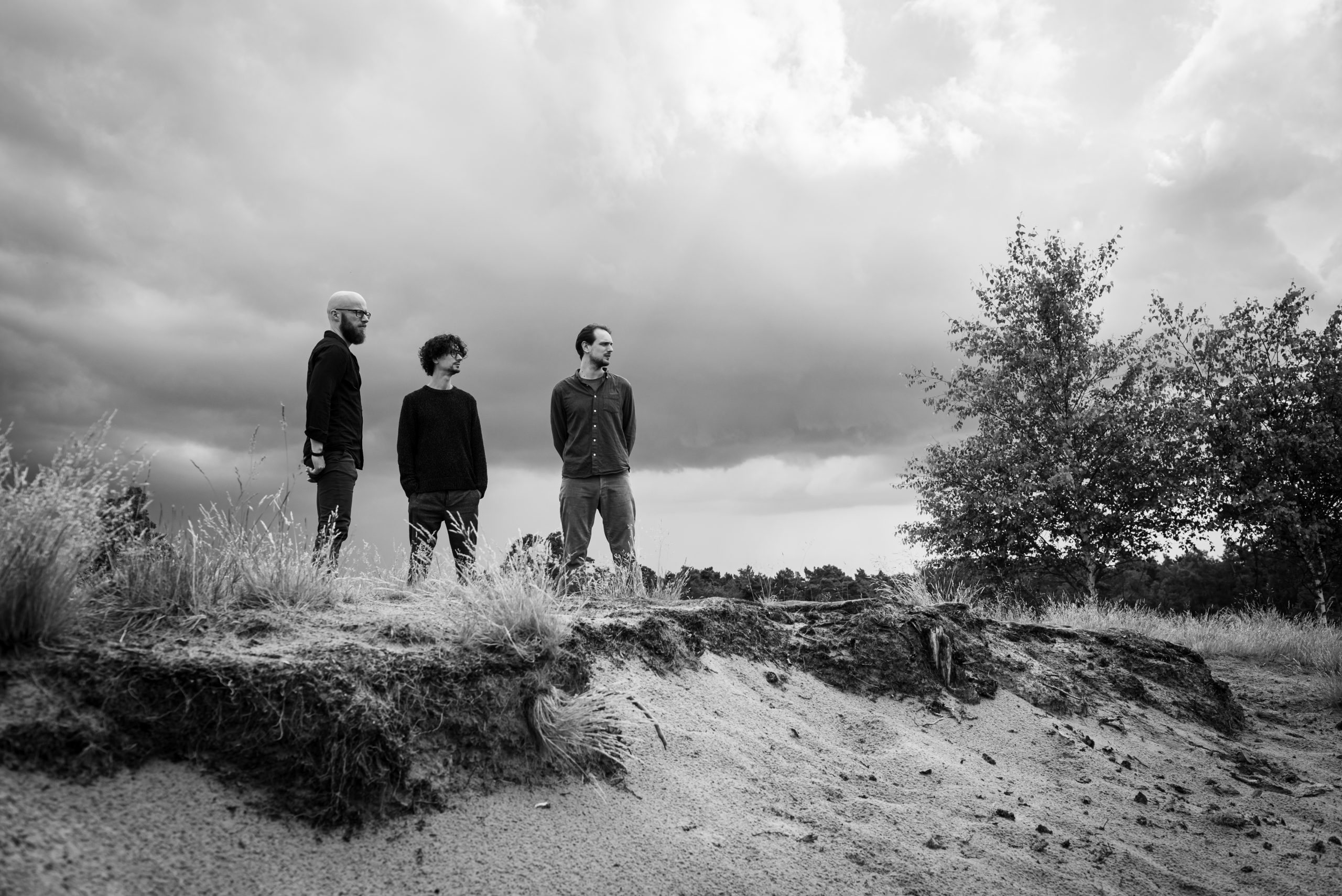 Our Oceans – “While Time Disappears”

Graceful, evocative, and emotionally charged, Dutch prog trio Our Oceans hit the spot with their new album, While Time Disappears.

I usually start reviews by listening to the album and typing a stream of thoughts as the songs go by. Somehow I knew Our Oceans’ sophomore album, While Time Disappears, would need a different approach. I’ve tried to analyse less recently, and feel more. I can’t help noticing some technicalities, like the use of odd subdivisions in a drum fill, the tone of the bass (excellent throughout, by the way), or chords borrowed from a different key, but it’s helped me to not be noting these down. Instead, the first three times I listened to this album, I did something I hadn’t done in months: draw. And it’s fabulous music to draw to, I tell you what. Inspiring, I guess, everything in it so vivid that I can’t help but want to splatter colour onto a page of my own.

Even though the opening track, “Unravel”, starts with feedback and noisy chords, don’t let it fool you – it’s not black metal in the slightest, and that becomes evident if you stick with it for not even half a minute. The verses are mysterious, the drums tight, bass a mere synth bloom, and guitar and voice complementary in their dreaminess. The chorus explodes like a raindrop hitting hot asphalt, small at first, but soon becoming a flood of hope, fear, and exhilarating anticipation. It’s the feeling of diving headfirst into something new, unexpected, butterflies dropping to the pit of your stomach as you launch yourself into the unknown. The song becomes a forceful wave, a tumble of emotions, and there is no shame to any of them. There’s nothing self-conscious or shy in this fervent prog jam – it’s like Our Oceans are saying ‘here we are, this is what we do, this is how we feel – we won’t apologise for it’.

“Weeping Lead” calms the fervour of “Unravel”, opening with a single luminous guitar and milky vocals, joined in time by wonderfully minimal drums and bass, and an ever-so-subtle pillowy synth. The lyricism on “Weeping Lead” parallels and outdoes its instrumentation. I adore the line ‘grinding teeth on rusty nails’ so much – it’s such a strong image, its counterpart ‘sinking under the crushing air I exhale’ equally evocative. Something changes after the second chorus; Grace for Drowning-era Steven Wilson is mimicked in odd chords and playfully sinister drums. The precious comfort of the song’s beginning starts to be replaced with something darker, less warm. The second half of “Weeping Lead” builds to anguish, simple guitar lines choked with woe, pounding my brain before dissipating into gentle vocals and bass.

Ironically, “The Heart’s Whisper”, the first track I heard, is one of my least favourites, not that that’s saying much. It’s gorgeous still, with blossoming fretless bass lines and iridescent chords, and I love its chorus; it’s so unequivocally sad, especially in its later, more desperate rendition. I’m just not a fan of the lyrics in the verses, though. I’ve always had a particular dislike for lines referring to the taste of lips – it just makes me uncomfortable. The passion on the choruses (‘Why do you scorn the words I give you?/Don’t you know they were meant just for you?’) and the tantalising build-to-vulnerability of the bridge make up for this, though. It’s still a stunner, and the bass playing is to die for. The whole middle section is a gentle tonic for nerves frayed previously: bass harmonics, layered vocals, subtly building drums, and crystalline guitars, before its final, heart-wrenching chorus and restrained demise.

I can’t get enough of this album. I would love to dissect every song for you: “Motherly Flame” with its husky intimacy; the bittersweet simplicity of “Passing By”; the defiant catchiness of “Face Them”. I don’t want to overhype it though (even though I’ve already failed on that front – sorry, I’m really into this album), and I also feel like I could never summarise While Time Disappears as well as Our Oceans themselves do. I’m kind of surprised that I like it this much, to be honest; it’s so vocally driven I expected to get over it at some point, but I don’t. I made a mistake when I first heard Our Oceans; I tricked myself into believing the vocalist was trying to imitate Leprous‘ Einar Solberg, or maybe Steven Wilson, but that’s not the case. He’s in his own sphere; not one that I usually venture into in terms of clean vocals, but they are what’s needed. His brief sidesteps into the harsher realms are also a powerful delight. It needs the vocals, exactly like this, and it needs the very modern guitar solos too, and the punchy drums. Everything fits. It’s perfectly executed complexity, never overbearing, and certainly never complex just for the fuck of it.

If I had to pick one song – the one song I liked the most, the song I can’t stop listening to, the song that fits the least yet intrigues me the most – it would be “Your Night, My Dawn”. This one doesn’t seem to fit into the narrative of the album, but I’m glad it’s there. It’s such a contrast to its neighbours: the bittersweet “Passing By”, the jarring and exhilarating “Face Them”, and the sleepy “You Take”, three hugely emotional songs; each one of these has me feeling like an intruder on a very private situation, one I know doesn’t concern me, yet I can’t turn away. “Your Night, My Dawn” isn’t like this. It’s still intimate, but in a much darker, dreamier way. I adore the drums and vocals on this song – so gloomy, simple, and luscious. The tickle of crunch adds to the vintage vibe, the half-squelchy bass locked in perfectly, the ideal canvas for Tymon Kruidenier’s lush vocal harmonies. The resolutions of the vocal harmonies are – literally – music to my ears. This whole song builds on, really, one idea, but it’s put across so fucking well. I love this one. A lot.

While Time Disappears is one thing – overwhelmingly sad. And I love it. The sadness presents itself as frustration, powerlessness, heartbreak, resentment (‘I resent the goddess you’ve become/yet I succumb’), meek acceptance, spine-chilling restraint (‘Is this his sweat that I’m tasting on your lips/and that you have me swallow?’). I can’t tear myself away. As Our Oceans say: ‘my heart aches just for pain’. While Time Disappears is quite possibly the best thing I’ve heard all year, and has catapulted itself straight into my album of the year picks.