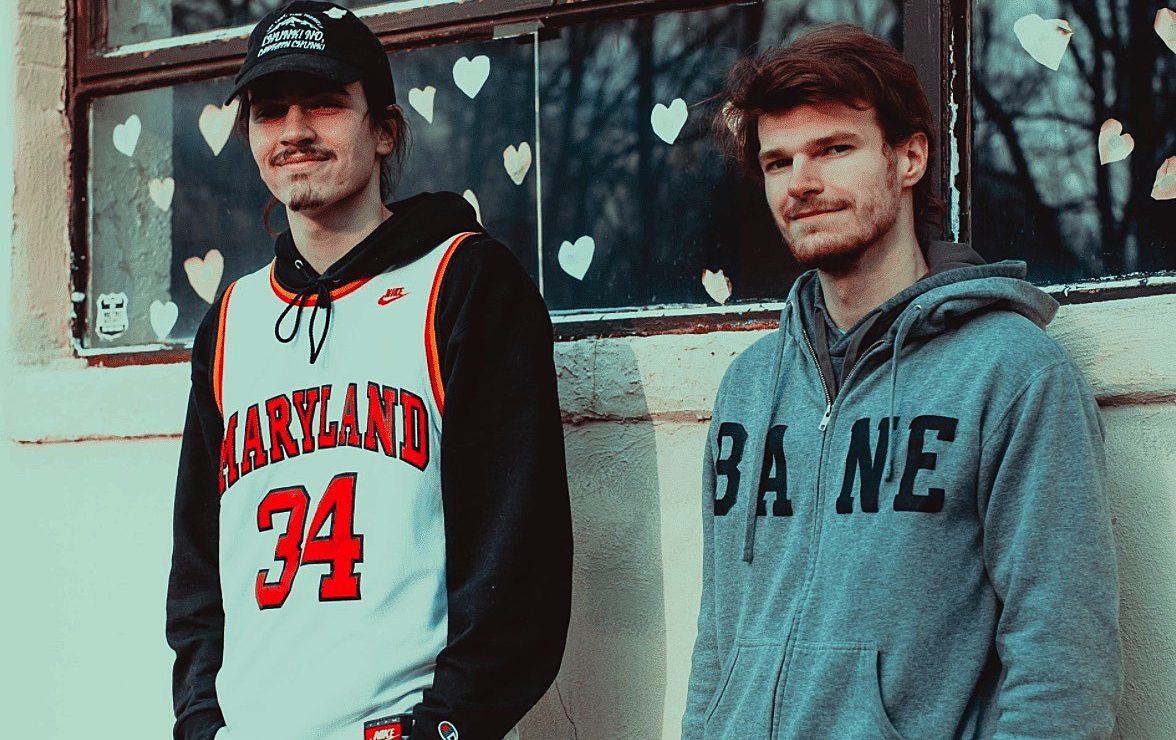 While overtly ambitious, GAMI GANG sees Origami Angel further elaborating on their own spin of emo-tinged pop punk, resulting in a collection of tracks that is all heart and no bullshit.

It’s 6:00pm. You’re finally done with telework for the day and you decide to head over to the supermarket to get yourself some well-deserved Reese’s Puffs cereal. It’s only five minutes of distance from your home, so it’s only logical to head there by foot so as to lose those extra pounds to be gained later – or at least you convince yourself so. As you take a right turn towards the entrance to the supermarket, you see two emo bois coming for you with blistering pop punk bangers and an attitude that is dangerously wholesome. ‘Oh shit‘, you whisper to yourself, ‘It’s the GAMI GANG.‘

Straight out of the birthplace of emo, Washington D.C., emo pop punk duo Origami Angel chime in with their sophomore double album GAMI GANG, ambitious in its format but just enough flavor to satisfy lovers of these genres thanks to their jovial, uplifting, and borderline naïve delivery to their otherwise thrilling music.

Their debut effort Somewhere City was a pleasant discovery this year for me, and I was stoked to find out that they would hit the studio to record GAMI GANG at that same moment. The singles they had released prior to its release further amplified this excitement, like how the chunky and highly infectious “Neutrogena Spektor”, in contrast with the heartfelt and true-to-the-core emo “Greenbelt Station”, provided me with a stylistic variety that felt very refreshing. Now, having listened to the double album in its entirety, I am left with the impression that it fell a bit short, though not without demonstrating a hell of a lot of heart and authenticity in the process.

Of course, this does not go without saying that GAMI GANG is solid, solid, solid. With a tracklist of a whopping 20 songs totaling a runtime of 50 minutes, Origami Angel managed to present a juggernaut of an album, packed with soaring guitar riffs, a pounding rhythm section, and charming vocal melodies. The duo clearly know their way around writing a song, and this double album is a testament to that feat. All the songs work wonderfully on their own, each one bringing out a vibrancy that is instantly contagious, in part thanks to the free-spiritedness of their lyrics and sound. It is a collection of tracks that is downright nostalgic, a homage to first loves, incessant friendships, and being defiant against those who shit on your genuine self. I don’t think there is a way to listen to this without feeling the least bit of giddy inside, trust me.

As fun as all of this is, I did find that there are some shortcomings here, mostly stemming from the double album format itself – the flow throughout GAMI GANG just feels sporadic. The first couple of songs, while great in by themselves, feel flatlined when played along with the rest of the double album, until we arrive at “Isopropyl Alchemy”, that is. From there on, the pace picks up quite considerably, showering you with a certain energy only a band like Origami Angel can pull off. “You Won’t.” and “Kno U” go off in a Jimmy Neutron brain blast fashion with animated and ear-pleasing punk performances, while the slow-burner “/trust” graces you with an ethereal wall of sound throughout the song, which is impressive given the overall sound GAMI GANG aims to lay out.

This increase in pace would soon dwindle ever so slightly with the 90’s-meets-post-hardcore cut “[spoons rattling]”, which again is not to say that this song – and the ones that follow – are bad per se, not at all. These songs, just like the rest, are admirable on their own; each of them brings something unique to the table and is equally as fun to listen to as the others. Yet, when played within the context of the double album, there is a noticeable change in flow and chemistry that was hard for me to miss.

The last five songs off GAMI GANG are simply fantastic, however. Whether it is the easycore banger “Dr. Fondoom” or the unbelievably catchy “Footloose Cannonball Brothers”, Origami Angel have easily crafted some of their best songs of their career within this bunch. They really do capture the essence and overall attitude of the band so perfectly, while at the same time showcasing new stylistic waters the duo is confident enough to tread.

You know, after repeated listens and after having written this review, I think it’s okay to not take my small gripe with this double album to heart. Granted, I still stand by what criticism I’ve offered throughout this article, but there is no denying that it was an absolute blast to listen to GAMI GANG. The character embedded in each and every song is palpable – they’re all feisty in their own quirky way. What’s exciting to me, though, is that behind the light-heartedness of it all, there is a band that is ready to take over the world, or at least I believe so. While there are some improvements that could be made, there is still a shining potential just waiting to be heard by you and me, and I cannot wait until that happens. Simply put, GAMI GANG is Origami Angel‘s own way of letting us know that they’re not taking ‘no’ for an answer, that they’re up for a challenge and more than able to continue blessing us with awesome music.