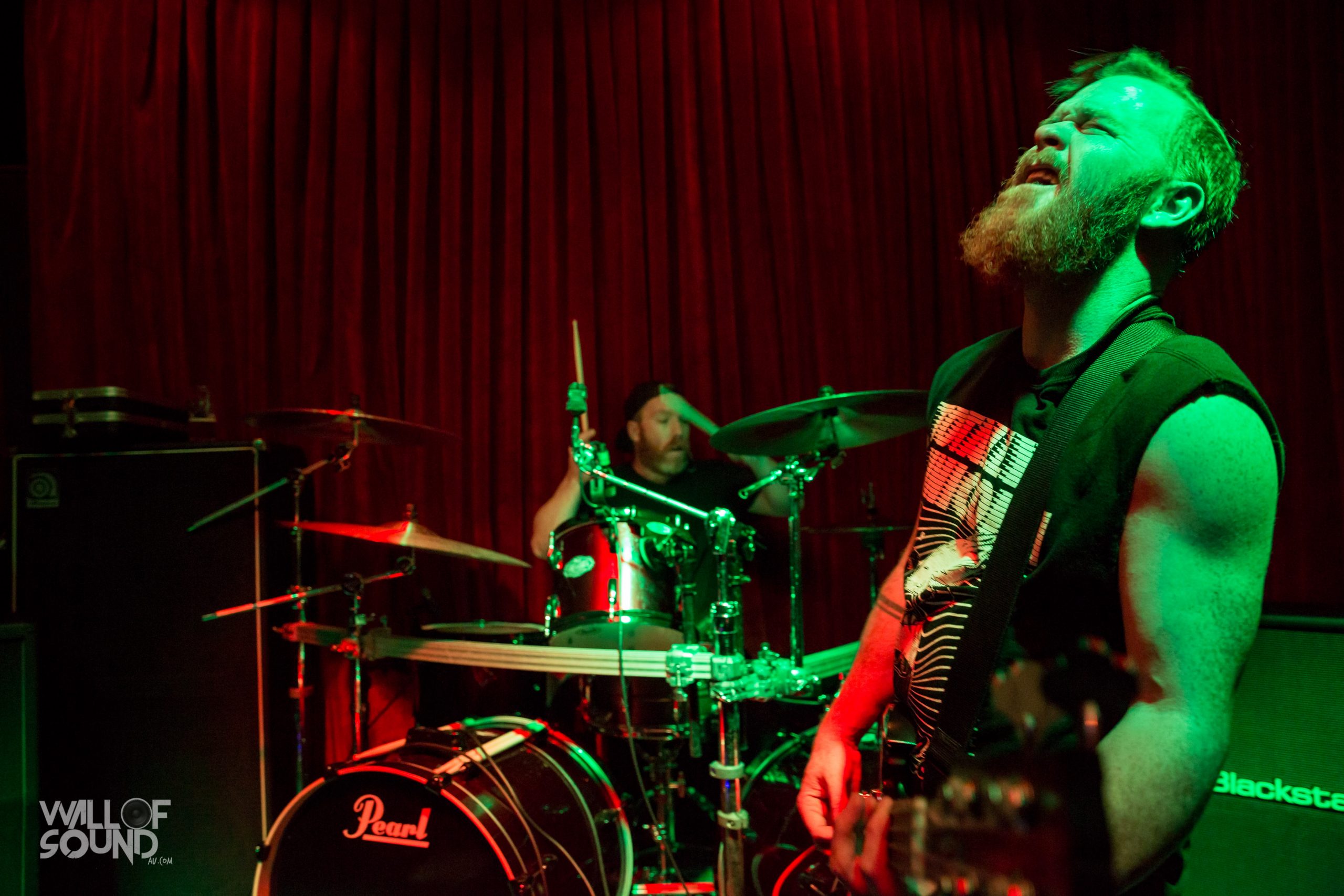 Australian duo OHM RUNE establish themselves as a stoner doom force to be reckoned with on their new album, Gargantua.

When it comes to doom, the stoner kind is my favourite. What’s not to love about bonged-out riffs, slow, sloppy drumming, lyrics that verge on nonsensical cheese, and more fuzz than any amp should reasonably be able to handle? But that’s just the thing; those seem to be the only desirable trademarks of stoner doom. I don’t tend to seek it out – with the exception of a few select bands, I’ve never had the urge to delve very far into it, probably out of fear that at some point, I’ll become so desensitised to these elements that all of the bands will actually end up sounding exactly the same. So, I tend to shy away from reviewing anything with ‘stoner’ in the genre tag. I like Sleep’s Holy Mountain, The Sword’s first four albums, most things by Bongripper, and Garganjua’s delightful Trip Wizard EP, before they turned psychedelic, and I feel most things I love about stoner doom can be found in these few albums.

I initially chose OHM RUNE’s Gargantua because of two mistakes: I thought the band was called Gargantua and the album OHM RUNE, and, because of this, wondered briefly if Garganjua had been misspelled and had, for some reason, gone back to their glorious doom days. Heading to the album’s Bandcamp page made both mistakes clear, but I pushed play anyway, and was instantly greeted by a fat-as-fuck riff right from the depths of some putrid green sludge swamp.

The guitar tone was not at all what I’d expected; doomy, sure, laden with fuzz and low end to boot, but much more synthy and modern-sounding than I’d anticipated. It gives the song a much more contemporary rock sound – it’s the kind of tone I’d expect to hear on a Royal Blood song, perhaps. And it turns out there’s a good fucking reason for that. OHM RUNE are just a drummer and a bass player, slaying eardrums with the help of an octave pedal and copious amounts of fuzz. The production is just as huge as the riffs. I’ve got to give OHM RUNE props: calling an album ‘Gargantua’ is a bold move, but right from the first few riffs on this opening track, they deliver.

It would be easy to say this is just another sludgy, weed-fuelled doom album, and many things about it are. The simple, bluesy charm of the riffs, the hairy ‘guitar’ tone, the lyrics about stars and travelling across the universe, the understated bass lines played with a tone so dank I can practically smell it – these are staples of any great doom album, in my books. A reasonable amount of Sleep-worship can be felt rather than heard, and so can a hefty amount of love for The Sword, even a tickle of Bongripper, three bands I’m more than cool with. And yet, I hesitate to call Gargantua ‘just another sludgy, weed-fuelled doom album’. There’s an edge to it, more thought has gone into its construction than stoner doom bands usually get credit for. The thing that sold me on it from “Temple” was the sly use of modulation, giving richness to the song’s harmonic palate. Secondarily, the vocals fit neither into sludge nor doom, being closer to the barking of thrash sung with the attitude of black metal. If you’ve read some of my other reviews, you’ll know by now how much I love black metal vocals. This is a very, very good thing to me.

OHM RUNE seem to understand people like me, who enjoy contrast – after the hefty dose of pure stoner bliss that is “Swarm”, they seem to realise that contrast doesn’t only work for tempo, but also tone and dynamic, and open the next song with an aethereal bass intro. “Atherial” also picks up the pace a bit where “Swarm” dropped it, its riffs verging on thrashy, were they 20 BPM faster. A psychedelic solo over a simple, chugging riff leads the listener away from planet Earth, and back to the space-bass intro.

Gargantua doesn’t pretend to be anything it’s not. It’s just a good time, the riffs never fail to delight me, and the tone, while limited, is just fantastic. I especially enjoy “Star Destroyer” – the longest track on the album, it oozes attitude, grit, and formidable tones. The one part I don’t like about it is its pre-riff (if there is such a thing); it’s a weird picked harmonic thing, and I just don’t enjoy the way it sounds, plus I feel it takes away from the badassery of the riffs as opposed to helping them stand out. It’s also got an especially resinous solo on it that I particularly like, its fuzzy edges accentuated by cosmic reverb.

“Ether” closes the album with yet another contrast. Opened by an almost post-rock intro, it soon makes its intention clear: to deliver some of the fattest, most kickass, and harmonically sensitive riffs. There’s not much harmony here, but where it is, it’s delightfully crunchy in its simplicity. The tone, especially of the solo, is different to what’s been used previously as well, and when the solo combines with the riff in satisfying synchronicity, it becomes almost, well, aethereal. That sort of thing makes my simple little bassist heart throb with sheer delight. The song ends in crystalline trails of bass.

Gargantua is spot on, and I wouldn’t change anything about it – filled with moreish riffs, both of the groovy variety (as in “Event Horizon”) and the crushing kind (“Swarm”), tastefully melodic and surprisingly shreddy guitar solos, a range of vocal timbres, and interesting song structures, it leaves little to be desired. I do think Gargantua errs a little on the long side – it’s not too long, but it pushes it for me. I think this isn’t helped by the fact that the style of tones and production stays pretty consistent throughout. Still, I’m proud to say I really like this album – it’s full of thick riffs, monstrous tones, and clever writing. This is the ideal stoner doom release.