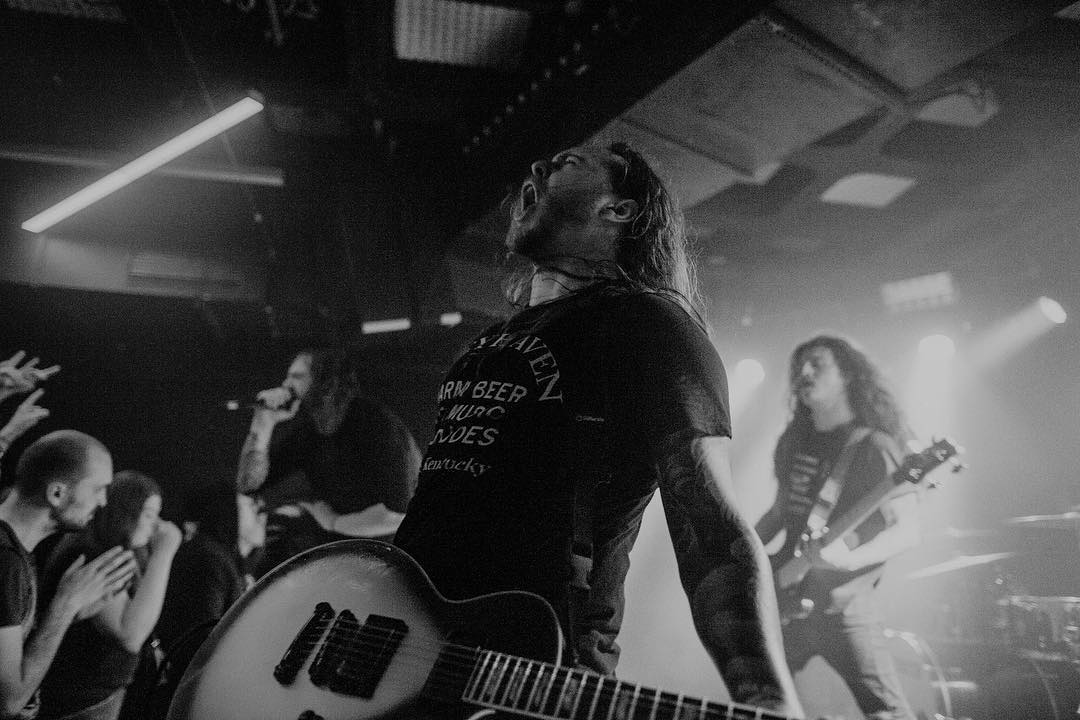 By Faisal BinzagrOctober 23, 2019 No Comments

All Hail proves Norma Jean cannot be stopped. Despite lineup shakeups, they’re back sounding more emboldened and powerful than ever – striking the coveted balance of evolving while maintaining the identity that made them loved by their fans in the first place.

To say Norma Jean have had a winding and varied career is putting it mildly. Core and casual fans probably know they started off as Luti-Kriss with their 2001 debut album Throwing Myself, before changing their name shortly thereafter. It’s also well established that the band have undergone extensive lineup changes over the course of their career. Let’s take a moment to consider something: their impending release All Hail  has an entirely different lineup than their debut. Not a single common member between the two records. Norma Jean’s story has been of pushing forward against setbacks that would have destroyed a lesser band many times over. Amidst the name changes, lineup changes, and changes in sound and style, they’ve cultivated a well-deserved status and loyal following over the course of almost two decades.

All Hail follows yet another lineup shakeup that left long time vocalist Cory Brandan and relative newcomer Phillip Farris (who made his debut on guitar on 2016’s Polar Similar) as the sole remaining members. Enlisting recent touring guitarist Grayson Stewart, and modern metal production King Will Putney among others, they’ve come together to craft a follow-up that’s unquestionably worthy of the band’s formidable reputation.

Brandan in particular stands out from the get-go for the finest vocal performance of his career. Seriously, the dude’s range and ability to emote – both in sung and screamed vocals – is exceptional, more so here than ever before. Putney’s characteristic touch also immediately stands out. Listeners may find his sound design a tad too processed, but it’s difficult to deny that he’s outdone himself here. He’s helped All Hail achieve a tone so monstrous and pummeling that it instantly outclasses this year’s comparable releases. That being said, the extent of your enjoyment of the album will largely depend on which era of Norma Jean you resonate with most. It isn’t as complex as Meridional (2010). It doesn’t have the razor sharp efficiency of execution that characterized Wrongdoers (2013). It occasionally shares some of the straightforward punishment of the band’s early material, but without the raw garage aggression. It’s most similar to its immediate predecessor Polar Similar, functioning less like a continuation, and more like a deep dive into some of its traits, namely bouncy alt-metal. Crucially, All Hail adds enough newer elements for it to coalesce into its own thing, arguably resulting in a much darker album than anything we’ve heard from the band before. The tones are bleaker, the distortion is greater, the vocals demonically aggressive, and the atmospheric passages ghostly and cold. At one point they used a knife as a guitar pick. The dosage of menace is just right. It’s spooky without detracting from the mission statement: to get the pits going.

All Hail is divided into three sections, marked by interludes. While all the songs compliment one another, there is a definite structure to the way they’re divided. Tracks one to three are the most straightforward; to-the-point post-hardcore vignettes. Tracks five to nine form the middle (and longest) portion of the album, and play the most with dynamics. These tracks feature the album’s catchiest ear-worms (such as the clean vocals and bounce riffs on “with_errors”), to its most pulverizing breakdowns (the straight-up sonic nightmare that concludes “Full Circle In Under A Minute”), and nu-er elements that could fit comfortably in an action movie soundtrack (the anthemic punch-to-the-gut that is the chorus of “Translational,” bringing Sw1tched to mind… remember them?).

The final portion of the album is the most reflective, veering into alternative rock in a way that the band has teased in the past without ever embracing fully. In particular, closing track “Anna” (a five-minute-plus alt-metal ballad) takes the band down a path that will be familiar to fans of Underoath, who dished out a whole album of this stuff on last year’s Erase Me. “Anna” is catchy and mainstream (though perhaps a little dated), but goddamn it’s done so well. The song toys with its main motif (a catchy vocal melody) throughout the track, manifesting as a ‘millennial whoop’ at times, and at others as a post-hardcore bellow, before concluding the song as a soft isolated hum, all while the music twists and builds around it. It’s brilliant, and proves that creativity is not the sole domain of complex arrangements or genre mashing.

I want to make an aside here, regarding the interludes. For the first time in recent memory I actually appreciated having them. They were creative. They provided structure. They didn’t feel tacked on, and actually helped enhance my enjoyment of the album as a cohesive experience. So, kudos to Norma Jean for pulling that off.

As far as my personal preferences go, I have little to criticize. A couple tracks (primarily “If [Loss] Then [Leader]”) felt redundant in that they didn’t offer anything new or better than what comes before or after.  I suppose there’s little here that breaks new ground, but it’s not supposed to. It’s supposed to pummel and linger in your mind, and it does that.

All Hail is a fantastic addition to Norma Jean‘s legacy. It signals a desire to get back to basics while sounding bigger and better than ever, without precluding future forays into greater songwriting complexity. While the songs largely feature streamlined arrangements, ideas and motifs are utilized playfully and with care. The hooks are catchy, and employed effectively. The breakdowns don’t waste power on fanciful embellishments. The experience is easy to process, while remaining muscular and atmospheric. It will draw you in, punch you in the face, shake some sense into you, and haunt you for a few days after. For any band, let alone one marked by so much behind the scenes turbulence, there are few greater achievements.