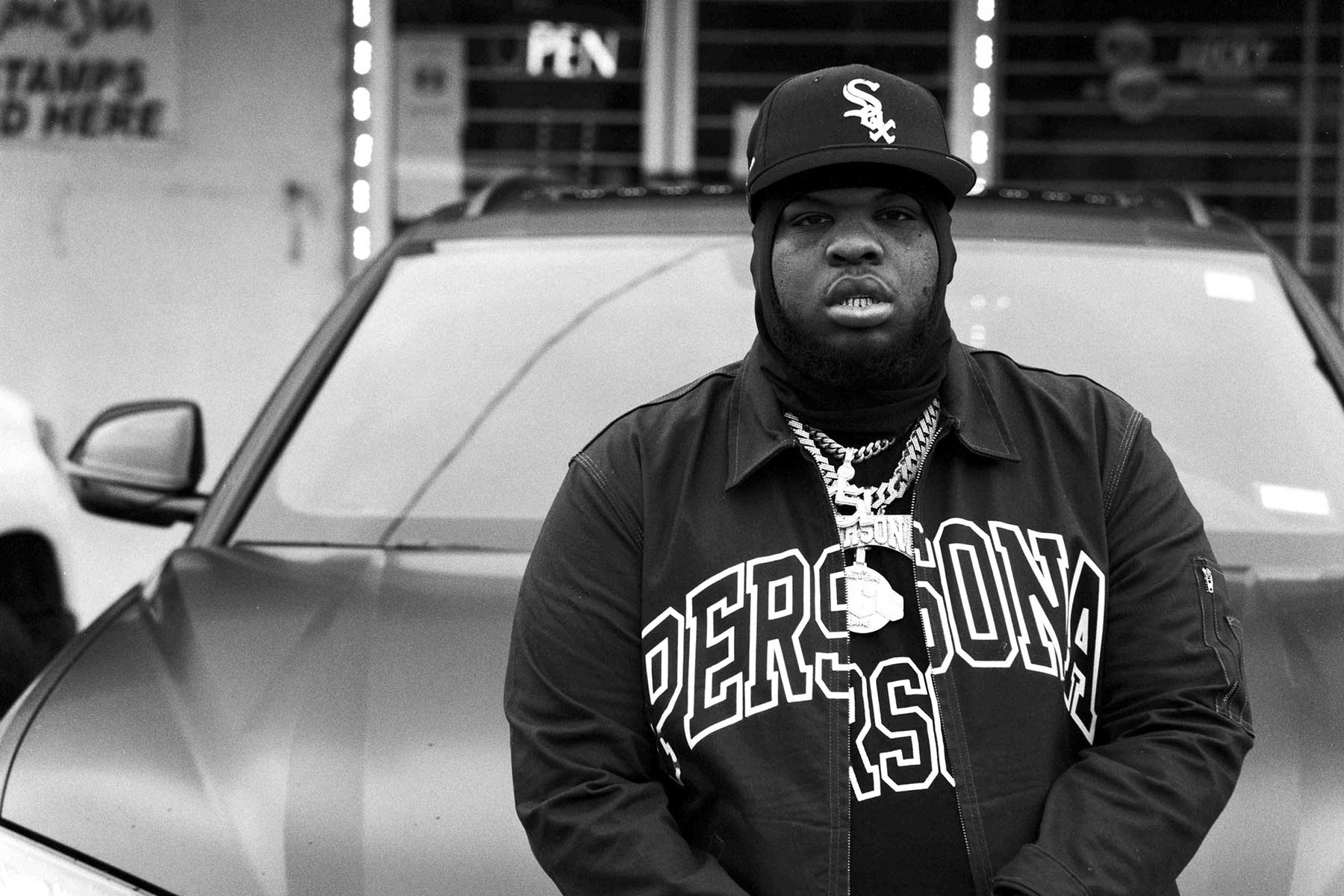 Maxo Kream – “WEIGHT OF THE WORLD”

By David RodriguezNovember 21, 2021 No Comments

I think your enjoyment of much of hip-hop, especially the more classically-tuned stuff, is very dependent on your sense of apathy and nuance. I’ve been listening to rap music for over 20 years, but only listening real intently for about 15 years. I take in stories, listening to hood-borne plights of systemic racism, gang life, poverty, police brutality, and being forced to sling drugs or rob to feed their family and friends. If you listen to rap and hear nothing but villainous tales of outlaws who deserve to be locked up for their supposed crimes, well, you may not be looking deep enough. It’s worth looking into exactly why NWA felt compelled to write “Fuck Tha Police”, why Ice T with his metal band Body Count released the incendiary “Cop Killer”, or why Public Enemy wrote “Black Steel In The Hour Of Chaos” (this also includes why the feds also came down hard on at least the first two groups for their music in a bid to not only censor their art, but, by extension, the truth).

Maxo Kream isn’t someone that will likely change your mind if you’re entrenched in your opinions on the matter, but he’s definitely someone within that ilk of rapper – someone really speaking some truth in his music, no matter how painful and revealing. The Houston native came onto my radar when my pal Ash reviewed his second album Brandon Banks. His positive review and cosigning meant I had to check it out, and to say I was blown away is a bit of an understatement. It quickly became one of my favorite rap albums in recent history, and digging in his past only revealed more gems like his debut album Punken, which has one of the only hip-hop songs that’s made me cry in recent history, “Roaches“.

Maxo’s life is something I’ve never experienced and never will, yet I can’t help but really feel for the dude. With WEIGHT OF THE WORLD, it’s more apparent than ever that he’s a product of his environment, one that took his brother Money Du‘s life, got his father locked up multiple times, made his cousin kill himself, and got some of his family on drugs, among so much more. He has a son on the way, possibly wifed up(?) a woman, and he has a lovely niece he cherishes and helps raise in light of her father’s death. In his words, he’s a family man now with the weight of the world on his shoulders, and this album is a testament to the steel-reinforced, inhuman perseverance and resolve, having the right team on your side to help stay on the right side of things more often than not to make Maxo the man he is today. With that much change in a short amount of time, it’s only natural for someone to reflect on life, and that’s what makes WEIGHT OF THE WORLD so strong.

Maxo himself is strong beyond measure, and he keeps a quiet storm-esque power in his vocal delivery on every song, never faltering or raising his voice beyond a clearly enunciated mid-timbre. It’s what makes songs like “CRIPSTIAN” hit really, really hard. This intro track is such a great first impression, allowing Maxo to vent about his anxieties and mourn his losses. Paying homage to 2Pac, there’s two lines in particular that show why I love him and his brand of wordplay: ‘Pray at night like, ‘Father God, is there a heaven for a G?’/ Jesus Christ could walk on water, I’ma Crip Walk on the sea‘. And the music video for this track? A continuation of 2Pac‘s “Thugz Mansion“, which imagines heaven as a lush villa where family and friends are rejoined to break bread and dance together after they pass. It is without a doubt one of the most beautiful videos I’ve seen recently, enough to bring more tears to my eyes as “Roaches” did before it. The second half of the sole verse on this track also houses some relevant, heart-wrenching bars:

‘I know heaven’s high, feel like my wins low
‘Cause I’ve been dealin’ with these family matters
Codeine on my fuckin’ bladder, doctor say I’m gettin’ fatter
Wealthy and not healthy, if you ask me it don’t fuckin’ matter
Love me when I’m broke as shit, they hate me now my pockets fatter
They love me broke and bummy, got rent money now I’m feelin’ sadder
If I can’t get in heaven, can I at least visit my brother?
So I can tell him ’bout my niece, how much I love ’em, kiss and hug ’em
‘Cause life without you is a struggle‘

If you asked me for only one reason why I think Maxo Kream is one of the best rappers going right now, I’d likely say his storytelling ability. For as long as I’ve listened to him and explored his catalog, it’s been a very consistent piece of his music, and it’s been kicked into overdrive with WEIGHT OF THE WORLD. One of the album’s singles, “LOCAL JOKER”, helps show us just how far Maxo’s come with his national success status as a performer, and even though he never forgets where he comes from, it’s not particularly with reverence that he looks back on those days.

‘When I go back to my hood, I see them same old ni**as
On the same old shit with them same old issues
Tried to show ’em if I did it, they could prolly do it bigger
But all we ever talk about is them same old bitches
And them same old stories and them same old figures
We was stackin’ up in high school, for them Jordans, we would kill you
I could lead you to the water, but can’t pedal your canoe
Reminisce ’bout Money Du and stupid shit we used to do‘

The production on here is appropriately nostalgic and gentle, with reverbed, muted guitars and bass; a good match for Maxo’s voice, which is always calm and collected. “MAMA’S PURSE” is a similarly-toned track and one of my favorites, the title alluding to when he used to steal money from his mom’s purse early in the morning and how money is far from the end of all pain in the hood (‘And ever since I made some figures, I’ve been splurgin’ on my momma/ And that’s the motherfuckin’ problem, it don’t help her with her trauma‘). The chorus has a neat interpolation/reference to Three 6 Mafia that I really appreciate as someone that grew up listening to the Memphis legends. Perhaps the most crushing, sobering lines come at the end of the last verse:

‘Call ’em thugs, you see jackers, shooters – me, I see my brother
Got love for shopliftin’ boosters ’cause that used to be my mother
Credit fraud, judge scammin’, fuck the cops, and free my daddy
I could take our mugshots and make a portrait of the family’

It’s no secret that Maxo’s been on a hard come-up as of late, though. His streetwear brand Persona is taking off, his status in the music scene has grown exponentially, so it’s only right that dude gets some flexing time, and it comes in the form of “BIG PERSONA”. Tyler, The Creator not only produced the track, but features with a bold verse and infectious hook, making for one of the most unlikely duos of the year (he also threatened to wear a dress to the video shoot, which is peak Tyler chaos). He seems to embody his Baudelaire persona for this track, referencing his flashy cars, jewels, and luxurious summer home as he did with reckless abandon on CALL ME IF YOU GET LOST. Coming up comes with its haters, but in the end, Maxo’s not super concerned with them – ‘I left the hood, they called me fake/ Ain’t shit realer than real estate‘.

Now that I think of it, every feature on this album bangs. A$AP Rocky showed out on “STREETS ALONE”, Monaleo has a show-stealing verse on “CEE CEE”, Freddie Gibbs does his thing with a quickened flow asking “WHAT I LOOK LIKE”, and Don Toliver provides a melodic hook for the album closer “BELIEVE”. It’s further proof that Maxo Kream really crafted WEIGHT OF THE WORLD with surgical precision, all to drop it on October 18, a very important and heavy day for him and his people in Kream Clicc with deaths, births, and more all coinciding with that day. Every facet of this album was diamond-cut to hit hard and burrow into you, from the trap-infused, moody beats to the lacerating, gut-punching lyrics that have a ton of anguish and distress behind them. But Maxo’s doing all right now. He’s in a better place with a lot to look forward to, seemingly putting the danger in his rear view, and it’s a beautiful thing.

Maxo Kream is one of the realest and most talented rappers in the game right now, and his steady incline of skill when it comes to writing, delivery, and putting his soul in the music is quickly becoming unmatched. Yet, in spite of all of that, he remains somewhat underrated, a fact he seems at peace with as long as he can ease his burden a bit at the end of the day with his music and make some money in the meantime. WEIGHT OF THE WORLD is what Maxo shoulders going into the booth, but his hard work and perseverance have given him a chance to lay it down and enjoy his new chapter of life – at least I hope so. Regardless, his story is laid bare for anyone to take in, expertly told with a weathered, yet bolstered voice and that kind of talent is absolutely indispensable in any genre of music.