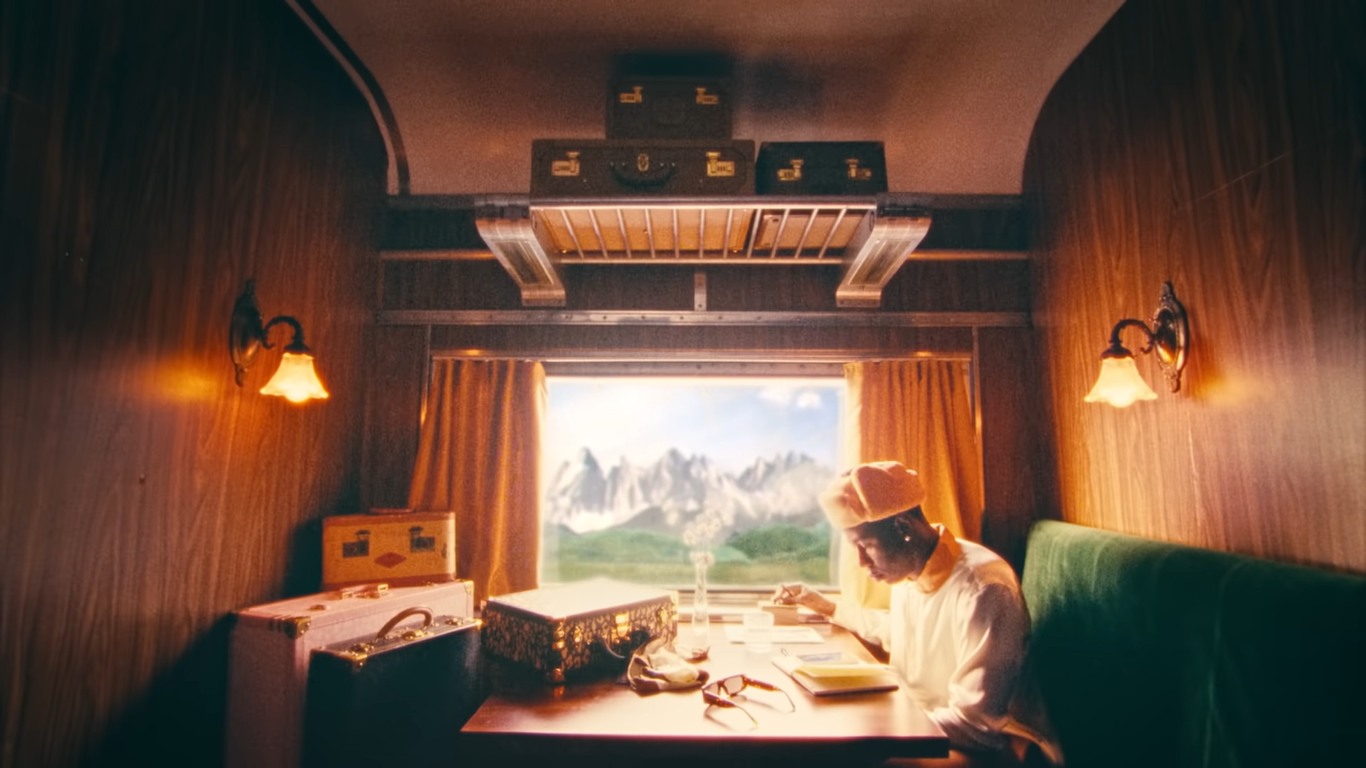 Tyler, The Creator – “CALL ME IF YOU GET LOST”

By David RodriguezJuly 2, 2021 No Comments

Tyler, The Creator continues to be his only competition. CALL ME IF YOU GET LOST is packed with painfully heartsick musings and trunk thumpers, just in time to soundtrack a cautious summer where both are inevitabilities.

Man, I’ve been waiting for this for years. I’ve been listening to Tyler, The Creator since Bastard dropped in 2009, a perfect tape for the edgelord exploring hip-hop’s fringes that I was. Odd Future was truly a revolution to my young mind, seeing a bunch of weirdo kids do whatever they wanted with nary a fuck in attendance – a Wu-Tang Clan for the Jackass generation basically. We got a myriad of talent from the collective over the years too, not just music. This moment means a lot to me as someone who’s been there since damn near the beginning with Tyler rapping like he’s on a mixtape again while still exploring more progressive, lighter proclivities he’s been dabbling in for a while now.

IGOR and Cherry Bomb were cool, great even, but Flower Boy and other previous albums were what I needed from Tyler musically. CALL ME IF YOU GET LOST is just that without any compromises except for maybe the extremely edgy, offensive stuff, though I’d hope a huge majority of his fans are over that by now, as he is. It’s also Tyler’s most personal, real album to date which, given his last couple efforts, is definitely something of note. It’s also also a bit of a dream project with him getting some childhood heroes on here like DJ Drama who hosted a number of mixtapes – including the legendary Gangsta Grillz ones – back in those explosive days of the early tape sharing on the internet, Lil Wayne makes another appearance (his first was on Flower Boy), and you know Pharrell Williams had to come through.

Really, CALL ME IF YOU GET LOST is a homage to the late aughts and mixtape culture in that regard, with or without DJ Drama, though the inclusion is more than welcome. Not only is Tyler rapping hard as fuck, the beats are brolic as well. When “LUMBERJACK” dropped as a single, all you heard was that sick-ass Gravediggaz sample and Tyler’s low register rap ‘Rolls-Royce pull up, Black boy hop out/Shout out to my mother and my father, didn’t pull out‘. Shout out to Jasper Dolphin for yelling in the back of the track like it’s his damn job too. Hell, the first track “SIR BAUDELAIRE” that establishes Tyler’s new alter ego, Tyler Baudelaire, uses a Westside Gunn beat. You don’t borrow from Griselda and do soft shit.

Buuuuuuuuut, this is Tyler, The Creator so soft shit is kind of an inevitability these days. Please note I don’t say that disparagingly – I think when he gets emotional and reflective, it makes for some of his best work (see pretty much all of IGOR) even if I’m more of a fan of rapping-ass Tyler. “SWEET / I THOUGHT YOU WANTED TO DANCE” is a long-form, saccharine epic split just about in half. The “SUGAR” side is a gentle, heartstruck R&B love song with shining synths showing the uphill serotonin rush of a budding partnership. Tyler’s singing voice is great, hitting those high notes in a controlled manner, showing the mastery he’s developed over it throughout the years.

‘You and I, we fell in love
I read the signs, ain’t know what it was
But God gotta know he might have peaked when he made you
The cosmos’ only mistake is what they named you

‘They should call you sugar, you’re so sweet‘

It’s such a warm, touching track and that only gets exacerbated by the switch to “I THOUGHT YOU WANTED TO DANCE”, a crash to reality masked in a reggae-infused track. I know what you’re thinking – it works very well though. The song in general deals with mixed signals and the dissolving of that love that was just starting out in “SWEET” because the other person chose someone else or, perhaps, was with someone else all along as alluded to by a couple lines from singer Fana Hues (‘I ain’t mean to lead you on because/Him and I got some things that we’re trying‘). Though the singing between Tyler, Brent Faiyaz, and Hues still shines brightest, he does rap a verse with some gutting lines like ‘The fuck do he got that I don’t got a lot of?/There go my ego again, that’s the problem‘ and this stomach-dropping ending:

‘Love is blind and y’all together, don’t remind me, so confusin’
What we doing? How y’all doing?
Oh, you choosin’ him? Okay, I gotta cope with losing, fuck
I ain’t been sleepin’ well
Twin, I’ll never tell
Stay busy so I don’t think, ’cause downtime is when it sink in
I stare at old pictures, I, I thought you wanted to dance‘

Maybe it’s because I’m currently going through some love-related issues of my own, but this whole track just open-hand slapped me in the mouth for how close it hit home, especially that last part. The finale resonated with me the most and made me break down a couple times; ‘I wish that we had better timing/I’ll save a dance just for you/So don’t forget about me‘. When all is said and done, this is probably Tyler’s best track ever and an amazing one to anchor down the middle of CALL ME IF YOU GET LOST.

Nothing dries tears like hip-hop that breaks your speakers though, and you don’t have to travel far for it. “JUGGERNAUT” is the hardest song on the album with punctuating bass and gold-star verses from everyone involved. Tyler, Lil Uzi Vert, and Pharrell Williams all come about as hard as they can. Tyler drips opulence and confidence, Uzi uses a quick flow to stunt on just about everyone in earshot, and Pharrell – holy shit – he comes through and steals the show in a way I haven’t seen since his feature on Future‘s “Move That Dope” (sorry, Push, I was pulling for you the whole time):

‘They just got the closest picture of the fuckin’ sun surface – that was us
Got the LaFerrari, park that bitch just for one purpose – catchin’ dust
My Secret Service carry mops, you call ’em street sweepers – back you up
Tat’ you up then add you up, then give you a cover like Adwoa‘

There’s literally something special going on with each song. Even the skit, “MOMMA TALK”, which has Tyler’s mom talking wild shit about her mama bear protectiveness toward her kids (‘My son used to record me beatin’ bitches’ ass, facts! I didn’t give a fuck. I bossed up on teachers, principals, mamas, kids…‘) is amusing as hell. “LEMONHEAD” has synthetic trap horns that really call back to the rap era this whole album calls back to. “MANIFESTO” is a neat reunion with fellow Odd Future pal Domo Genesis for a track that addresses Tyler’s apparent silence and perceived refusal to speak on issues of social justice when in reality he was participating in his own way while living his life (‘Black bodies hanging from trees, I cannot make sense of this/Hit some protest up, retweeted positive messages/Donated some funds then I went and copped me a necklace‘). Real Gs move in silence I suppose.

As my word count bulldozes past the 1000 threshold (don’t act surprised), I realize that I’m in way over my head in terms of covering all the stuff worth covering on CALL ME IF YOU GET LOST in the manner I wanna cover it. I’ll suffice it to say that this album has it all. The inclusion of DJ Drama‘s random drops and vocals, while definitely unnecessary, made me smile so many times and really gave it extra character for someone raised during that era. This could have dropped in 2008 and, for the most part, no one would have batted an eye as far as it sounding anachronistic or out-of-place. Plus, it gives Tyler some space for flexing and checking off those bucket list boxes. The album’s themes of love and wanderlust aren’t new by any means for him, but it’s all in the execution. This album is unique among his catalog. He’s never painted himself into a corner musically, so it was anyone’s guess as to where he’d go.

Tyler, The Creator is grown now, but still very much human. He fucks up, he can be selfish, he’s an emotional spender – he’s not perfect. Every album has always explored multiple facets of his personality and creative mind – in that sense, ain’t shit changed here. It’s what makes Tyler, Tyler. He continues to weave stories greatly influenced by his life, to the point where it’s hard to tell where artistic license and hyperbole take over. There’s true heart in CALL ME IF YOU GET LOST as there was with previous albums, but this feels… different. Like a new leaf was turned. No matter what, the only person he has to out-do at this point is himself and that’s a great place to be.