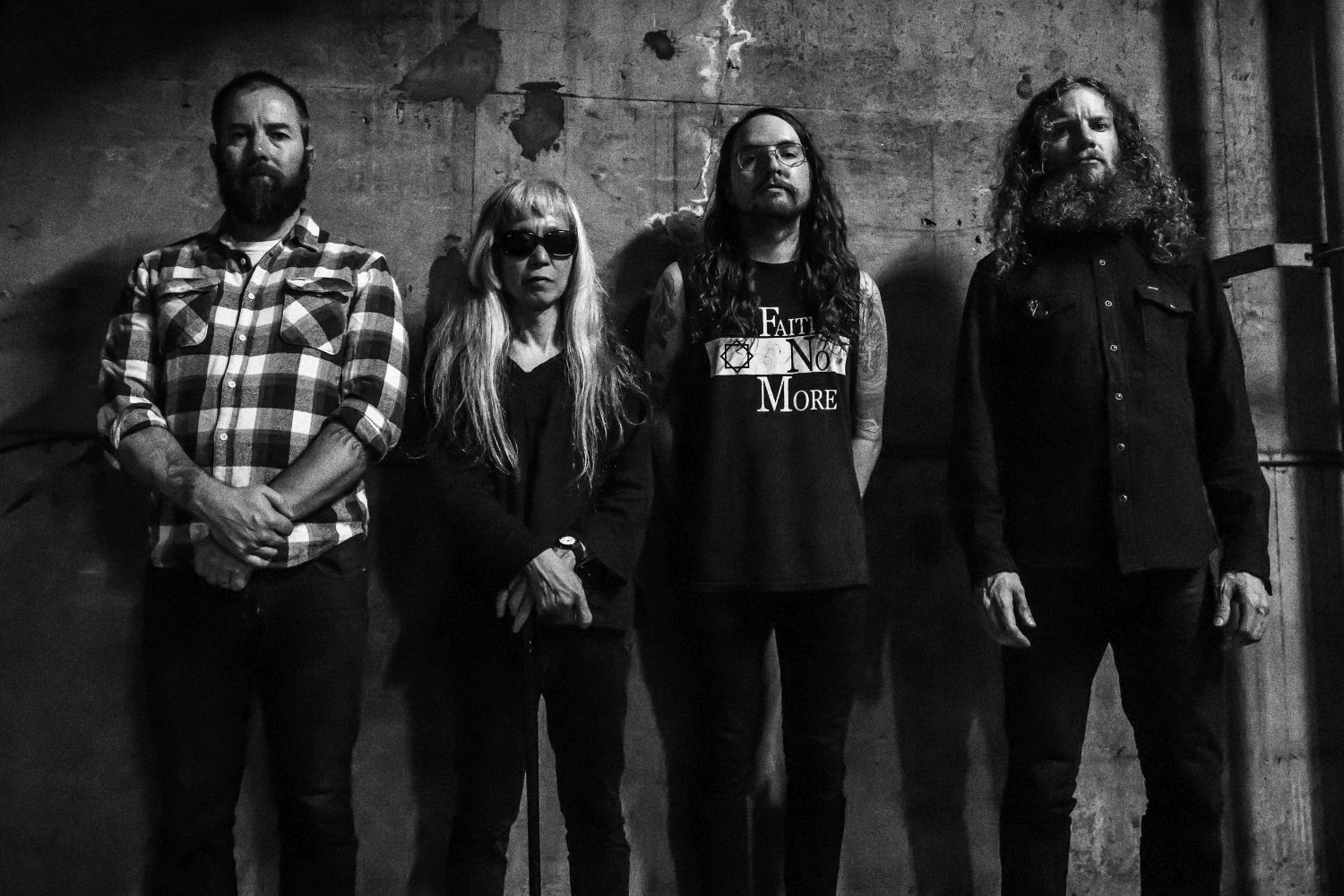 Keiji Haino continues to blaze his own trail through noise wonderland on his third collaboration album with Aaron Turner’s SUMAC, sounding more like Fushitsusha than they have yet.

It’s been 8 years since the last Fushitsusha release, 2014’s 3-hour live opus Nothing Changes No One Can Change Anything, I Am Ever-Changing Only You Can Change Yourself featuring Peter Brötzmann, and this is the closest we’ve been to a new album since. Of course, we haven’t been left without greatness from the black-cloaked enigma (this is his 3rd album with SUMAC since 2019), and he has released a plethora of solo and collaboration albums, including 2020’s career highlight The Meaning of Blackness (More Decorous Than Duty Having Become Faster Than Everything A Smile That Was Never Birthed Into The Light). Yet, with this new live album Into this juvenile apocalypse our golden blood to pour let us never, I feel a void has been filled much like the page is being filled by Haino’s poetic titles. Recorded live in Vancouver in 2019 without prior discussion or rehearsal, we find a collection of intriguing pieces that find great balance amidst a melting pot of ideas and musical backgrounds.

The first piece is a very much a missing Fushitsusha classic, though without some of the length and breadth they perfected. “When logic rises morality falls Logic and morality in Japanese are but one character different” is a mostly quiet and atmospheric start to the album, before Haino’s recognisable wail drifts over the top. It remains high-pitched over the top of a brooding quiet, creating a level of eeriness and tension little else can match, though it does end fairly abruptly and thus slashes the tension at the end.

Never mind; you wouldn’t have time to mind, as we’re thrust straight into the single “A shredded coiled cable within this cable sincerity could not be contained”. This is the first sign that we actually are not hearing Fushitsusha, as that bass tone is far too sinister to be anything other than a sludge band. This slab of bass underscores the piece as the combo throw slabs of noise and chaos at us over the top. Thrashing drums, frenetic guitar attack and various noises fill your ears before Turner’s guttural bellow takes over, providing a very obvious counterpoint to Haino in ways we haven’t had on their previous outings. The aggression and heaviness repeats and carries on in much the same way as the ethereal sounds of the opener, creating an entirely different breed of atmosphere, though.

The title track finds an instrumental balance between these two sides, which represent the yin and yang of this album. We’re again treated to an underscoring slab of bass but with less chaos; there is guitar noise, but it’s as soothing as it is menacing. There is a consistent tension throughout the piece, brooding across 11 minutes without hitting you over the head or letting you relax, slowly building to a thrashing crescendo but restrained enough not to be a shock.

We find another slightly abrupt switch into “Because the evidence of a fact is valued over the fact itself truth??? becomes fractured”, as a single note rings out for two minutes before a soft cymbal hit strikes and Haino begins to ramble. This is no ordinary Japanese stream of consciousness, though, as we’re treated to an extremely rare performance in English from the maestro. Though much of it is still unintelligible and mumbled, he passionately implores the audience and the listener to ‘be bright’; ‘no need to be the one to discover, be the one to be discovered,’ he proclaims. Haino becoming a motivational speaker wasn’t on my 2022 bingo card. but it is another fascinating piece of work from him. This piece is another that could be straight off a Fushitusha classic from the late ’80s, as a soft guitar melody rings out over a repetitive plucked chord and a bass drone, underscored by a consistent but varied drum backing. As the piece revels in a beautiful tension, Haino softly howls above, like he’s alerting the wolfpack to some sad news.

We move back into sludge territory as soon as the aptly titled “That fuzz pedal you planted in your throat, its screw has started to come loose Your next effects pedal is up to you do you have it ready?” begins. Never a collaboration to be straightforward though, we get pulsing drums and chugging chords, but we don’t get the bass for over a minute as we build into the full sludge. When we get there, we are treated to an aural blunt instrument driving into your ear drums with a force and power we came to expect from SUMAC but is fairly uncharted for Haino. As such, we get more of Turner’s guttural vocals – this is much more a SUMAC featuring Haino enterprise, as we have a noisier take on their experimental sludge metal with a more intriguing dual guitar battle than we get on their own albums. Or is it? As the track progresses, we get a much more caveman-like bass line with the same driving force as Haino takes over vocals, his more aggressive vocals to match the song in what becomes a really exciting song.

Final offering “That “regularity” of yours, can you throw it further than me? And I don’t mean “discarding” it” is the shortest, clocking in at below 6 minutes. We get more feedback and tenstion, as a slow, brooding guitar riff plays before more chaotic and powerful drums come in. It’s a noise assault that again shows just how wild the combo can get when they want to, as Haino lets out pained screams low in the mix to leave the album on an uneasy note after a lot of ups and downs.

While this is the closest to Fushitsusha Haino has come in 8 years, it’s also an incredibly varied and exciting album that sees all members wield a chameleonic ability to go in and out of styles. Ambient? Easy. Sludge? Done. Noise? No sweat. SUMAC manage to show us exactly how experimental they can be as a sludge band, and Haino reminds us just how tireless he is and exactly why he is deified in the avant-garde world. While the album does have a lot of ups and downs and a fast pace, this does somewhat detract from its subtlety. Fushitsusha and Haino’s projects can create an atmosphere and tension from almost silence as opposed to the in-your-face nature we find here. Maybe not quite as long and expansive as it could be, with a lot of abrupt ends and switches, but an exciting addition to the discography of two artists who continue to enthral in their scenes.