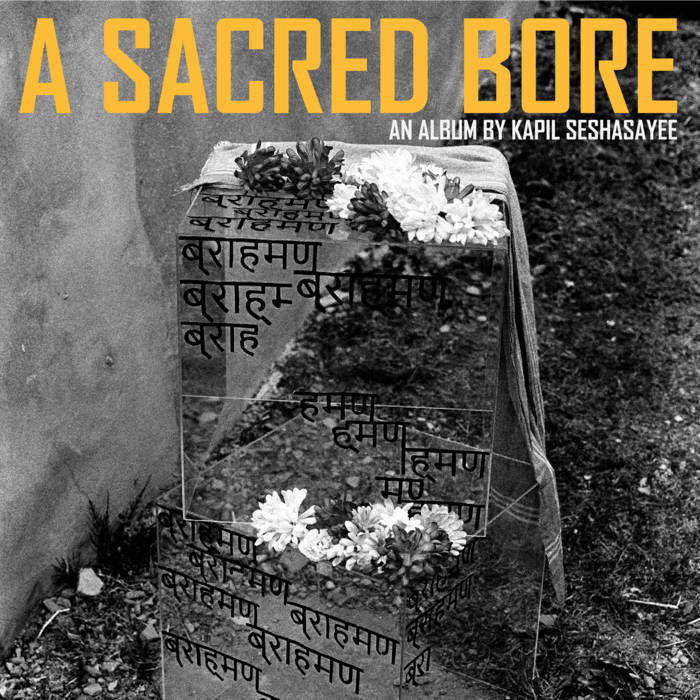 Kapil Seshasayee’s A Sacred Bore is both a masterpiece, and one of the most bitter let downs you will experience this year.  The composition is excellent – but it needs confidence from a label to give it better production, and, potentially, for Kapil Seshasayee to step aside and let a stronger singer take the frontman position.

A Sacred Bore sounds like a faster, more experimental, and more intense version of Lunatic Soul, stripped back to give a raw, surprising, and downright brilliant set of music.  With the first song, eponymous to the album, A Sacred Bore introduces you to Kapil Seshasayee’s world of pounding, extended Carnatic (Southern Indian) flavored riffs.  This style is continued throughout the album, with digressions into original and virtuosic fingerpicking, and effective caesura.

As the album progresses, more instrumentation is introduced under the same format of captivating guitar parts and complex structures as the earlier songs.  And boy, is some of it good.  (A lie – all of it is, but you get the idiom.)  Particularly impressive is “The Ballad of Bant Singh”’s latter sections, an atmospheric and oppressive guitar riff repeated over electronic drums and wailing vocals.  That is until a transition into yet another guitar riff that, rather than just being a catchy lick, transports you along with it as your brain tries to keep up with what is being played.  Also check out “Caustic Wit”, which combines the fingerpicking digressions of the first part of the album with the more distorted tones of the latter parts.

So why do I say that this is a masterpiece?  All of the above combine into songs that are unique – Seshasayee’s music sounds like nothing I have ever heard before.  For Seshasayee, I am sure, this will be taken more as a comment on my limited musical experience, but for someone who has not spent a lot of time listening to Carnatic music, and who certainly has not heard it in an electrified context, replete with transformed progressive staples such as stuttering stop-starts and time signature manipulation, A Sacred Bore provides some of the most original and engaging music that I have heard in more than a while.  When I listen to this album, I genuinely have no idea where each song is going to go, and wherever it does go, I enjoy it.

But, for all that – oh, Seshasayee’s voice!  In more forgiving moods, you might think to compare Seshasayee‘s voice to Serj Tankian’s in tone.  It’s oddly mellow, perhaps, with little body.  Even in those moods, though, I think that you would find it hard to claim that Seshasayee hits every note.

This is actively distracting, and makes it rather difficult to listen to the album.  I don’t enjoy Seshasayee’s voice at any point – but I can cope with it.  The attempts to reach high notes in, for example, “Ligature Hymnal” or “Caustic Wit”, are painful to hear, however.  I would buy an instrumental version of this album in a heartbeat – whether I listen to the version with vocals much is still an open question for me.

Which begs a fairly important question:  who releases an album where the singing is, in places, out of tune?  And could, with better production, Seshasayee’s voice be serviceable?  After all, progressive music knows many talented musicians who, at least at the beginning of their careers, were not the most talented of singers.  But, with time in a proper studio, and some post-production, even those who end up being particularly shaky live can get away with it on albums.

Or, might it be that Seshasayee should simply get someone else on board?  It would mean that he was not the frontman anymore, and would mean that he might not get to name his project Kapil Seshasayee. One can see sharing perhaps even the greater portion of public appreciation for the music you have written – especially when that music is this excellent – being difficult.  If Kapil Seshasayee wants his music to gain the popularity it deserves, though, he may very well have to do so.