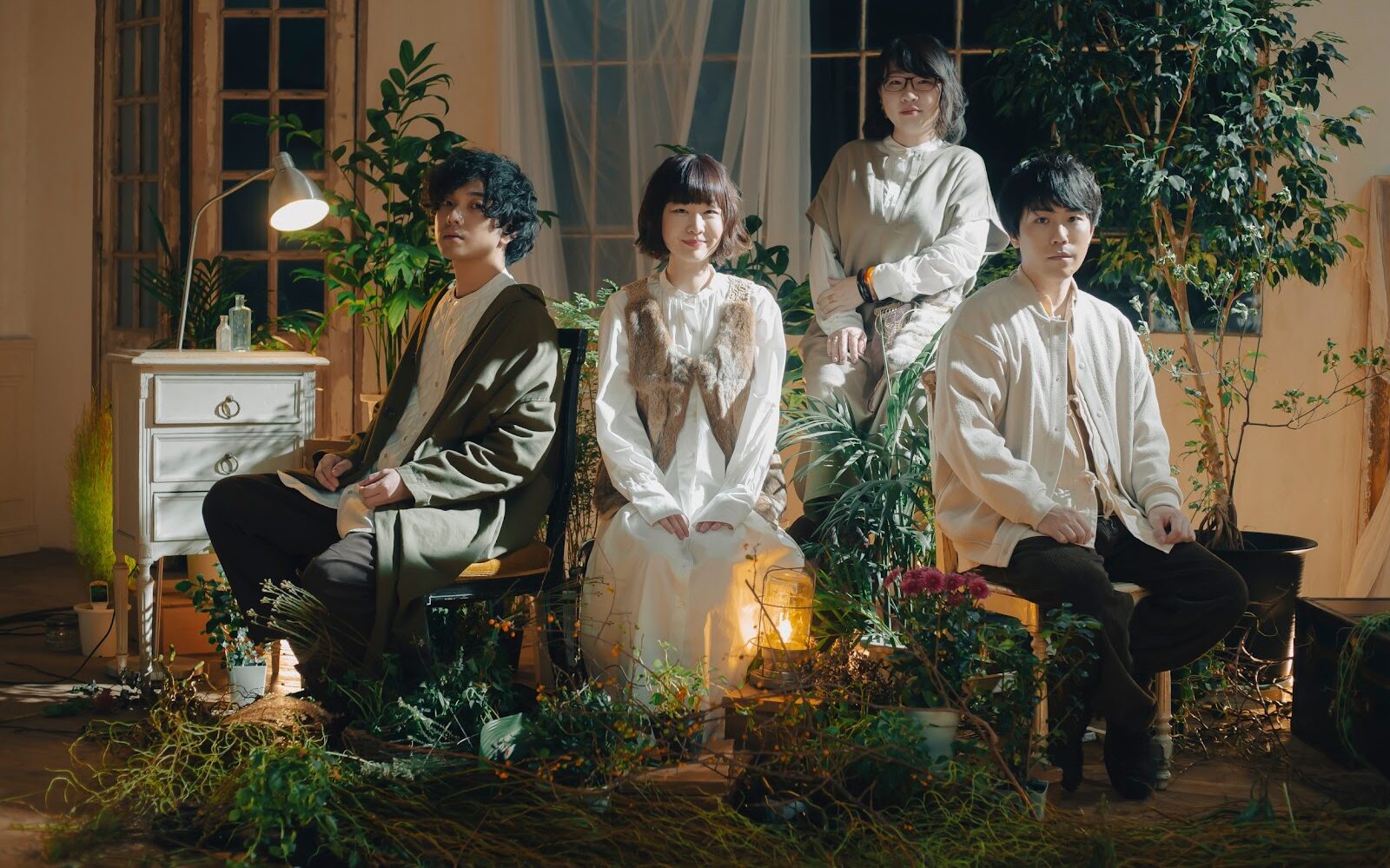 JYOCHO – “Let’s Promise to Be Happy”

By Carlos Vélez-CancelMarch 5, 2022 No Comments

Let’s Promise to Be Happy finds Kyoto prog pop act JYOCHO exploring more mature and contemplative sonic lairs while keeping intact their joyous and inspiring melodies. A much-needed record for 2022, this one is.

To me, Kyoto four-piece JYOCHO’s breezy slant of math rock always felt like a promising sunrise after a night of tough mental meandering, or whenever it is you get that unexplainable yet welcoming hunch that good things will come your way. It’s lighthearted, energetic, and so full of life that you’ve no choice but to give in to their musings with a big grin on your face. The band’s fantastic 2018 release 美しい終末サイクル evoked these sensations in me in a swift fashion, notwithstanding the insane musical chops each member candidly exhibited throughout. Their latest offering, Let’s Promise to Be Happy, continues this very trend, albeit while showcasing a more grounded approach to songwriting (without sacrificing technicality, thankfully) and a rather contemplative mood to their accustomed joyful spirits.

These introspective undertones on Let’s Promise to Be Happy are not a coincidence – apart from an album title that slightly suggests a vague struggle that leads to holding onto the mentioned promise of happiness, guitarist and founding member Daijiro Nakagawa elaborates on the general attitude the record revolves around:

‘The music on this release was influenced and revolved around the question, ‘Do we really want to be happy?’… As we seek happiness, things that are not happy are born within us. It is difficult to keep happiness in the same place for a long time. In order to keep it circulating, we have to bear and face the happiness and sorrow of others.’

You can catch that right away with the intro track “New Reminiscences”. Nakagawa’s velvety noodling soothes your way towards the rest of the record whilst creating the slightest hint of wistfulness that permeates each track after it. This, however, quickly recedes onto the back-burner as the lead single “All the Same” lights up the room with its encouraging flow and fervent energy coming from the syncopations brought forth by the drums and the signature airy sound of the flutes.

Come to think of it, this emotional ebb and flow is present throughout and, quite frankly, characteristic of Let’s Promise to Be Happy, touching upon varying moods that revolve around pondering the meaning and the want of being happy. It’s safe to say that everyone is in search of happiness to a certain degree, and this is manifested on the record through songs like the triumphant “Gather the Lights”, whose vocal performance (as immaculate as always, mind you) is confident and self-assured, interlocked with meticulous basslines and an ascending refrain that amplifies this overall sentiment of standing your ground. Conversely, the piano-led tracks “Stay in the Circle” and “Turning into the Blue” introduce musical instances that come off as captivatingly jarring amidst gorgeous passages, their odd-time orchestrations of guitar plucks, pounding bass drums, and discordant piano thumps pulling you into a rather anxious, solemn, or worried state of mind.

Things start to both simmer and build up on “The End of Sorrow”, an excellent piece of prog that brings forth elements of reflection, realization, and urgency through exhilarating hi-hat and snare rhythms, somber guitar leads, and the tender hums of the flute that ever so gently peek through the offbeats, further developing the track into one that is on the cusp of blooming.

Let’s Promise to Be Happy pays off and comes full circle with the second-to-last track, “Measure the Dawn”, a song that represents resiliency and a feeling of looking forward thanks to the grandiose songwriting that is incredibly tasteful without ever going overboard. It’s a driving track, which is only amplified by a powerful yet comforting vocal delivery that makes it both a personal highlight and a testament to the band’s successes in exploring around the core sound they have already established. This is followed by the closer “Never Forget”, a sonic palate cleanser that settles you into a state of certainty that will absolutely linger on for hours after listening to it.

JYOCHO are certainly a unique bunch within the math rock circles thanks to their dulcet yet energetic tunes. On Let’s Promise to Be Happy, however, the band proves they’re more than capable of transcending that very label. Not only do they excel at employing diverse moods with their contagious melodies here, but they are also able to convey them in such a succinct and concise manner, and over such a short runtime. Surely this is another win for the four-piece, and I am stoked to witness JYOCHO further breaking barriers while making unassuming listeners’ entire day. The journey towards happiness is indeed more adventurous and complex than we’d like to think, but let me be the one to tell you that Let’s Promise to Be Happy is one hell of a starting point to get there.