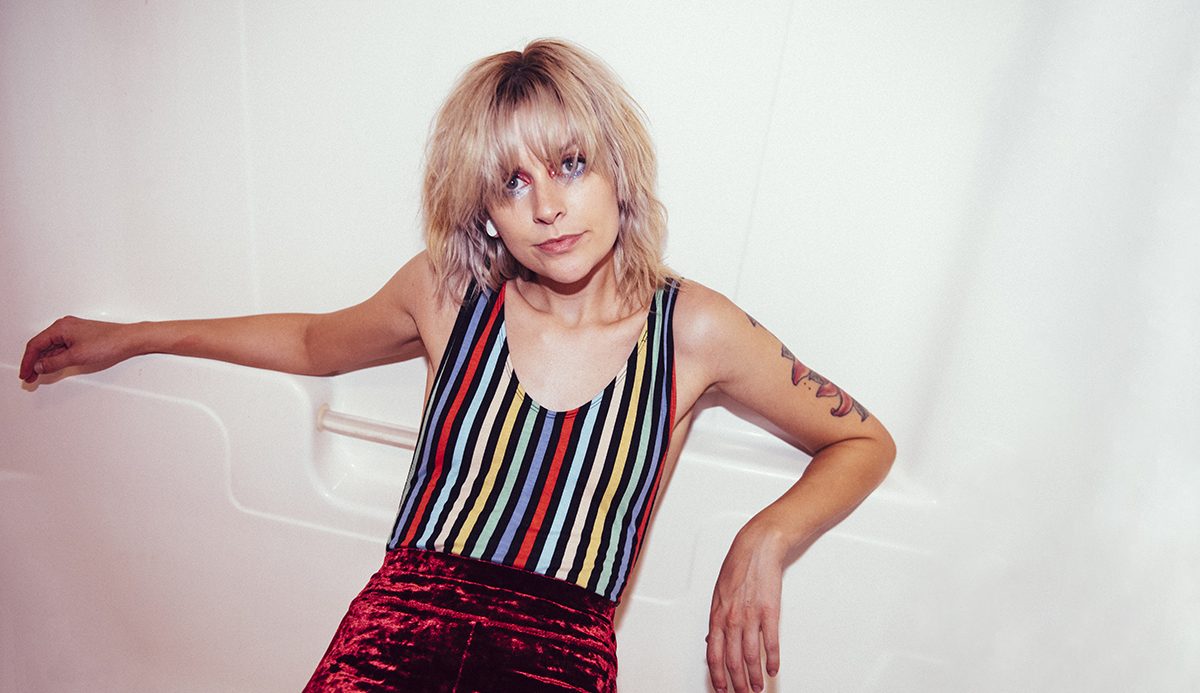 About a year or so ago, before the music industry went on hiatus, I had purchased tickets to see Tiny Moving Parts at a small venue near my home. I’ve been a fan of the band for a while now, but I hadn’t had the chance to see them live. As my excitement grew, I performed my typical ritual of checking out the openers that I wasn’t familiar with. Belmont and Capstan had the pop-punk-mixed-with-post-hardcore sound I was expecting, but the final opener I listened to managed to catch me off-guard. It was a poppy approach to math rock, with bright vocals and insanely catchy hooks that I was immediately smitten with.

Thus began my discovery of one of my newest favorite artists, Jetty Bones.

Jetty Bones is the impressive brainchild of singer and songwriter Kelc Galluzzo. Her fantastic writing skills and vocal talent (which can actually be heard on recent Tiny Moving Parts albums) have garnered attention in the alternative rock scene for all the right reasons. The collective has already released three EPs that gorgeously mirror math rock influences, but the music had also incorporated an interesting nod to pop through vocal melodies and chordal structures. After years of releasing music through smaller independent labels, Jetty Bones had been signed to Rise Records. This announcement led to her first full-length album, Push Back, and my god, this cheerful-sounding pop record tackles dark subjects head-on in the most substantial way.

From the get-go, Push Back is a massive departure musically from the first three Jetty Bones EPs. The album’s first single, “Taking Up Space”, still shows off the accustomed pop-punk chops, but the rest of the record moves in entirely different directions. “Nothing” sounds like it was plucked straight out of the 80s, complete with electronic drums and synths. The production is crisp and pleasing but doesn’t feel out of place. Sure, it’s entirely different from the more rock-centered “Bad Trick” and the theatrical “Bad Time”, but fortunately, the difference in moods on the song makes the entire unit stronger and more digestible.

My favorite song on the album has to be its second single, “That’s All”. Despite being less than two minutes in length, it’s filled with wit and a tremendously catchy vocal line. The track may seem like a typical pop track on the surface level, but during repeat listens, you can discover the obvious math-rock influence in the underlying guitar tracks. It also features intriguing fast singing on the bridge that sounds like rapping, which is a technique Galluzzo also utilizes on the songs “Everything” and “Woke Up Crying”. I find it hard to hear this track and not instantly bob my head to the beat, which isn’t necessarily something I felt when listening to the other Jetty Bones EPs. To me, the difference in styles between the EPs and Push Back is crystal clear, but Galluzzo’s personality still shines through, especially on “That’s All”.

Some of the most memorable moments on the album come from the tracks where the most risk was taken. For example, the raw and stripped-back piano ballad, “Ravine”, shows off just how phenomenal of a vocalist Galluzzo is. The track gives off a perfect somber and introspective mood that does a great job of portraying a feeling of emptiness. The final lyrics, ‘Cause I’m getting old/I’m only twenty-seven but I might as well be dead‘, hit me like a ton of bricks every time, especially because I (as well as plenty of people I know) feel like time is already slipping away from me, even though I’m only in my late-twenties.

In addition, the song “Dolly” is a full-blown country tune that is inspired by Dolly Parton. While the track sounds incredibly upbeat and joyful, the lyrics are quite the opposite, and it deals with Galluzzo’s intrusive suicidal thoughts in an up-front and brutal fashion. Both songs really show the vulnerability that Galluzzo is willing to put into her music, and the result is effective and truly eye-opening.

The album’s final track, “Bug Life”, is easily the hardest to listen to. The quiet acoustic guitar ballad was actually penned as her suicide note five years ago. About halfway through, Galluzzo sings, ‘Call the bluff, that you’ve been hanging off of/You can’t hold on forever/This cliff hanger is you over the edge/You’re falling off soon’, and it hits me straight in the gut every time I hear it. Once the lyrical content concludes, the song (and album) ends with soft acoustic picking and voicemails from her family and friends showing concern. I’ve listened to the album multiple times, and I get chills every single time. Galluzzo let down her defenses and really let the listeners experience her raw emotions, despite all the pain I’m sure it put her through. All I can say, as a fan, is that I’m grateful for her vulnerability and I’m incredibly glad she stayed.

Push Back is one of the most unique pop records I’ve heard come out in recent years, but it comes with a lot of warnings. Kelc Galluzzo really let loose and reveals some of the darkest perceptions she’s experienced, which can be triggering to those that struggle with their mental health. However, if you feel comfortable and willing to dive in, the album is an unbelievable look into trauma through a vulnerable lens. Jetty Bones dances through her sorrow and uses art as a form of therapy, and hopefully you can find comfort in this wonderful collection that is far from being filled with one-dimensional pop songs. Add Jetty Bones to your list of artists to watch out for because Push Back should definitely launch her to mainstream success.