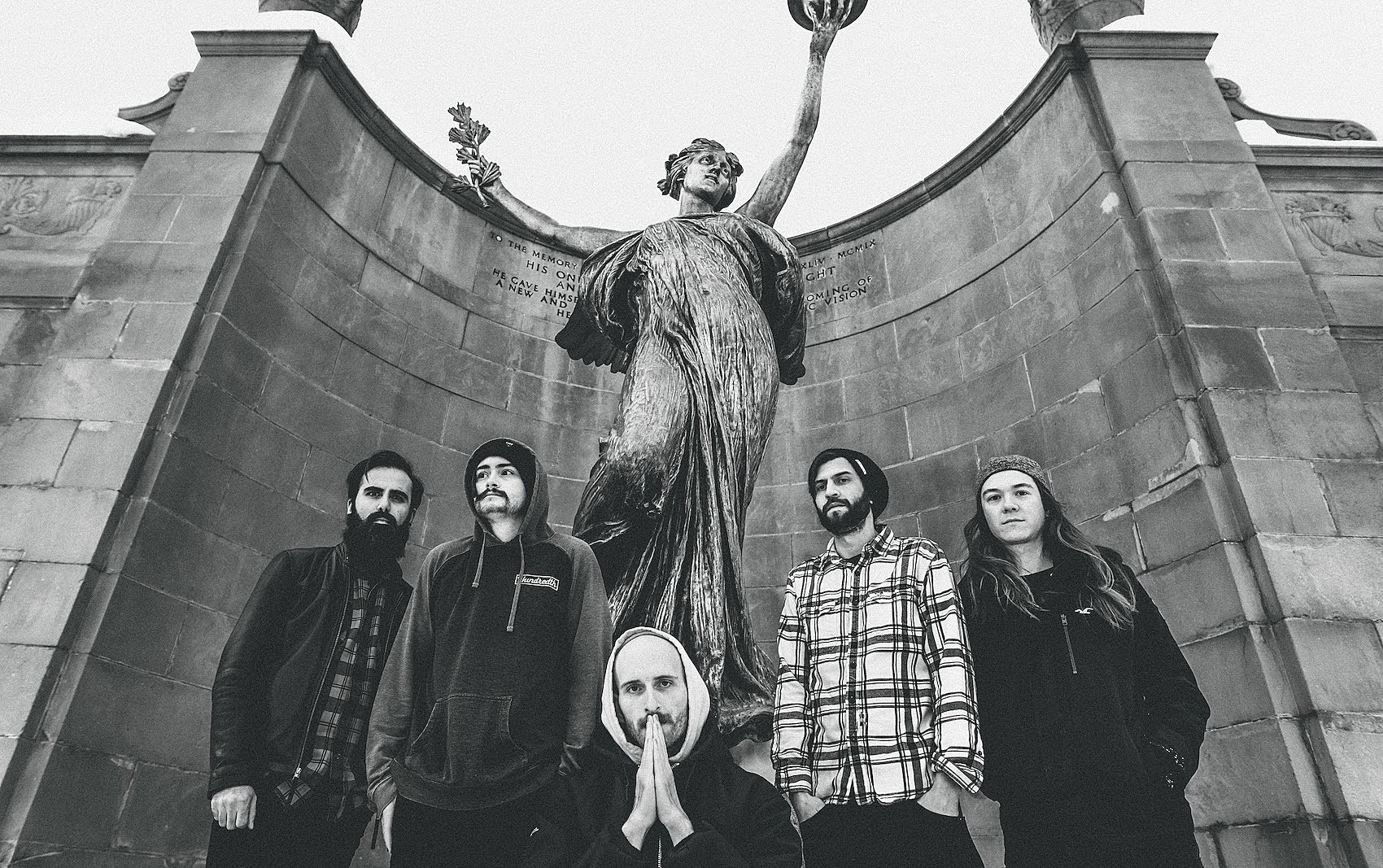 Modern Grotesque is a devastatingly beautiful album that showcases screamo at its zenith and puts Dreamwell at the top of the mountain.

I’ve sat here for a while trying to begin this review, just thinking about how you introduce an album of this caliber. Modern Grotesquerie is easily a standout album of 2021, and I can confidently say it will be on the shortlist of my favorite albums of the year. Every piece of this album feels like perfection. It is dazzling, fragile, and hauntingly intimate while simultaneously being an unceasing typhoon of angst and pain. Dreamwell has taken expectation completely off the table and tossed them forever to the wayside where they seem to be insignificant now.

I was captivated by this record immediately. It begins with a slow, melancholic melody that comes through nice and clean. It is paired with harsh and emotive screams evocative of the genre and I was definitely ready to hear more from the opening seconds. A slight interlude leads into the first track “Painting Myself a Darker Day”, with ambling guitars building into a full cathartic release with the whole band blasting out all at once. It works perfectly as it is rattling and instantaneously pulls everything into a frenzy. The bass, drums, and rhythm guitar push everything at a breakneck pace while another plays clear, beautiful melodies weaving into the mayhem for intersections of pure bliss. When the rest of the band eases off, that guitar often guides the interludes. It is essentially the eye of the storm, offering quick breaks for gasps of air before the songs churn back into a full roar.

Modern Grotesque is as beautiful and poignant as it is devastating and haunting. The dichotomy of such contrasting sounds is handled expertly, with the melodic and ambling moments moving in incredibly naturally. On the contrary, many of the most frantic parts of the album kick off with a snap, cutting through rich layers of reverb with driving precision. There is so much emotion packed into the heavy moments, particularly carried by the vocals of Keziah Staska. They mix between high, harsh screams and emotive singing-bridging-yelling, with an occasional mix of prose-like spoken word a la La Dispute. Most of this style of singing are done in very short bursts, sometimes for even just half a line. The backing singing harmonizes eerily well with Staska’s voice, adding another coat of paint to the desolate canvas Dreamwell have painted. “A Crouching Tiger Waits For Prey That Never Comes” is a stellar example of the layered voices adding an extra punch throughout most of the track.

Since I talked about the emotional intensity of the vocal delivery, it seems like a fitting place to talk about the lyrics as well. Let me add a trigger warning here for the reader, these lyrics are pretty damn dark. I’m going to mention mental health issues, loss, thoughts of suicide, and child abuse in the next couple paragraphs so be aware! One of my favorite things about this release is the fact that Dreamwell are absolutely awesome and provided the lyrics to every track on their Bandcamp. I believe part of the reasoning for this must be because of how good they are. Lyrics can be really redundant, boring, cringy, or just played out very easily. As much as I love sad music, more often than not you find a lot of the same trappings in their lyrical content. Even while hitting a lot of the same subject matter that you’ll hear elsewhere, Dreamwell do it with such a beautiful and poetic style that there aren’t any lines of lyrics that are redundant. “Plague Father, Vermin Son” has some of the hardest hitting and poignant wordplay I’ve ever seen, and it is devastating. ‘I must have taken part in the violence. I can’t have only been a victim. I must have guided the hand that broke me. I was shaped by abuse, now I’m the vermin son.‘ It’s so hard to talk about abuse, and especially to do so in a way that doesn’t seem ham-fisted or just messy. ‘This anxiety’s a black stone you vomited out when you swallowed your children. You must have engraved the worst parts of you in my bones. I’m some sick attempt to reverberate the evils that you have sewn into your home.‘ Dreamwell take subject matter that is difficult to speak about in clear ways and display it so elegantly that it’s almost baffling.

“Painting Myself a Darker Day” is incredibly relatable for anyone with dissociation issues. It very plainly speaks about needing isolation for the betterment of your own mental health, and the guilt that can be brought on by that. ‘I don’t mean to make you feel like I don’t care about the precious moments when our time intersects. I’m just nervous for the future. Exhausted by the present.‘ I have personally felt this way so much, and have pushed people away at my worst. It’s always so refreshing to hear someone else experience similar feelings, like you’re not alone or as crazy as you thought. ‘I’ve been painting shadows on the wall with the light of the time that I’ve been burning to get my life in order.‘ The first line in the song is one of the most powerful and poetic on the entire album and it’s one of my absolute favorites. “The Lost Ballad of Dominic Anneghi” deals with really similar emotional content, and the closing lines are terribly sad and delivered with such an exasperated tone. ‘I will be alone. I will find a way to make you hate me. I will push you away. I will burn down our home. I will find a way to make you hate me. It’s in my blood. It’s in my bones. I will find a way to make you hate me. I will be alone.‘

Another highly emotional track that hits hard and close to home is “A Crouching Tiger Waits For Prey That Never Comes”. Songs about breakups and lost love are easy to relate to, but just as easy to roll your eyes at sometimes. Dreamwell just do it so much better than everyone else. They take an often juvenile topic that is severely overdone and turn it into pure art. ‘Can you feel it when I think of you? I’ve known you too long to have just forgotten the words to your song, so why can’t I hear it sung on the breeze? I could pick your voice out from a choir of everybody’s prayers but mine, so why can’t I remember the way that you sounded back when you told me you loved me?‘ I have forgotten the voices of some people who used to mean the world to me after many years apart, and things like that hurt a lot more than you ever prepare yourself for. This song speaks of loss of love in a much different way than it often comes out, and I love that. It ends with a chilling line – ‘I don’t want to let you know what I’ve been thinking. I’ve been thinking things are better when I’m gone.‘ This is probably my favorite track on the album. Lyrically, instrumentally, just everything about it comes together so perfectly. I don’t feel crazy for saying that I’ve been listening to it multiple times a day everyday.

Modern Grotesque is one hell of an album, and that is a near criminal understatement. It is a perfect mix between beauty and sadness that hits with the force of a train. Beginning to end, this album is gleaming with bursts of intense screamo energy interwoven with emo and post-rock passages that add to every element and always keep you wondering what the next moment will bring. There is a self-cognizant clarity to the lyrics that show an intimate fragility which feels precious to be privy to. Every song feels unique and careful in its craft, and every note just feels so right. I can’t talk much more highly about Dreamwell at this point in time. This is a must-listen album to anyone who enjoys emotionally heavy music as a catharsis. You won’t find many things that hit this hard that are done this well in 2021, let alone ever.