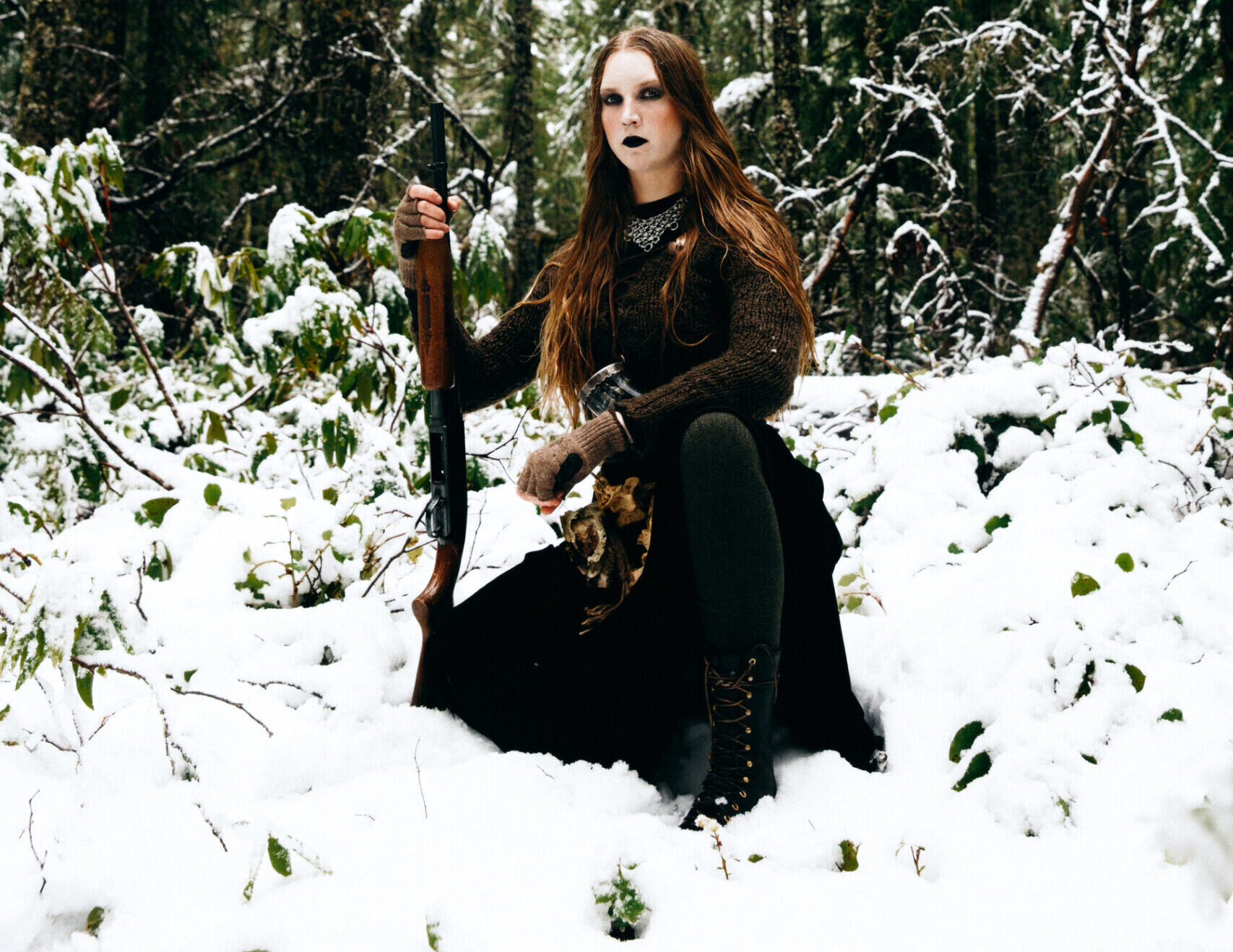 By Jake WaltersAugust 4, 2022 No Comments

I’m not sure how many times I’ve said it, but I will say that the best thing about black metal is just how flexible it is. You can drape it over just about anything else and it works. From the electronic approaches of Brii and Abstract Void to the folk leanings of Vile Haint to the jazzy inclinations of White Ward: there are a lot of places where the genre will fit. That’s not to say, of course, that black metal has no home of its own – it’s just an adept traveler who can comfortably lodge almost everywhere. Hulder, the (mostly) one-woman act is a great example of black metal in its natural habitat, and quite the luxurious one at that. After some widely-praised demos and releases through a variety of labels and avenues, Hulder has landed on the powerhouse 20 Buck Spin and immediately put forth an EP of five tracks. Let’s dig in.

The first thing that I noticed when giving The Eternal Fanfare a spin was the upgrade in production, which to some black metal purists will be noticeable, but don’t let that silly affection for a silly idea get in the way of enjoying a great set of songs by this impressive act, ok? Hulder has paid her dues as an independent artist, and the glow-up here is subtle but well-deserved. Things still feel the correct amount of murky and the gnarly vocals are appropriately chastising, and while the guitar tone feels a little too soft for my own personal taste here, it is good and fits the aesthetic quite nicely overall. Same with the drums – they’re arguably a bit subdued in the mix, but I think the goal of cohesion was met with the mix and for that reason, I think it serves this release well. The tone for this EP is a bit less rambunctious than the Godslatering… LP that was released last year, so I think the product works as intended.

After a quick atmospheric neo-folk intro track, we get into the galloping that Hulder is known for. “Burden of Flesh And Bone” is fueled by a sense of movement, dynamic moments, and a Phil Tougas guitar solo. Yes, you read that right: Tougas is on this Hulder EP, blasting a solo to give this song some extra oomph that sets the tone for what follows. It was a moment I didn’t see coming at all, but I love that it happened and the end result paid off.

The thing that Hulder has always done with seeming ease is transporting us as we listen. While some music triggers introspection and reflection, there’s always been a sense of wonder and catharsis with her music. Aside from the often medieval sensibilities that arise in the music, the use of interspersed clean vocal harmonies on top of the growls adds a noticeably nice layer. “Sylvan Awakening” employs that trick to great effect in a song that already uses layers to keep building until its impressive conclusion. This sort of approach helps set Hulder apart even further and makes for a listening experience that doesn’t stray so far too far from the core but still plays outside the lines enough to be engaging.

The EP’s closer is a morose affair and clocks in just a tick below seven minutes. All of the elements previously mentioned are employed by this track as if it had all been building to this. A great and time-tested structure, but “A Perilous Journey” is far from trite. The spacious drumming across the toms, the synth leads, and oxygen within the song feels a step closer to full-on atmospheric black metal than the raucous, raw affairs of the band’s early catalog.

The prolific Hulder now has a stellar EP on what some would call the premier label of the metal underground, 20 Buck Spin. Without a doubt, this is a major win for the act, and it remains to be seen if this new EP is the entirely new direction or a passing thought. Regardless, output like this is what black metal needs, and I’m no time at all will pass until Hulder is making our ears ring with riffs from haunted places of our minds.