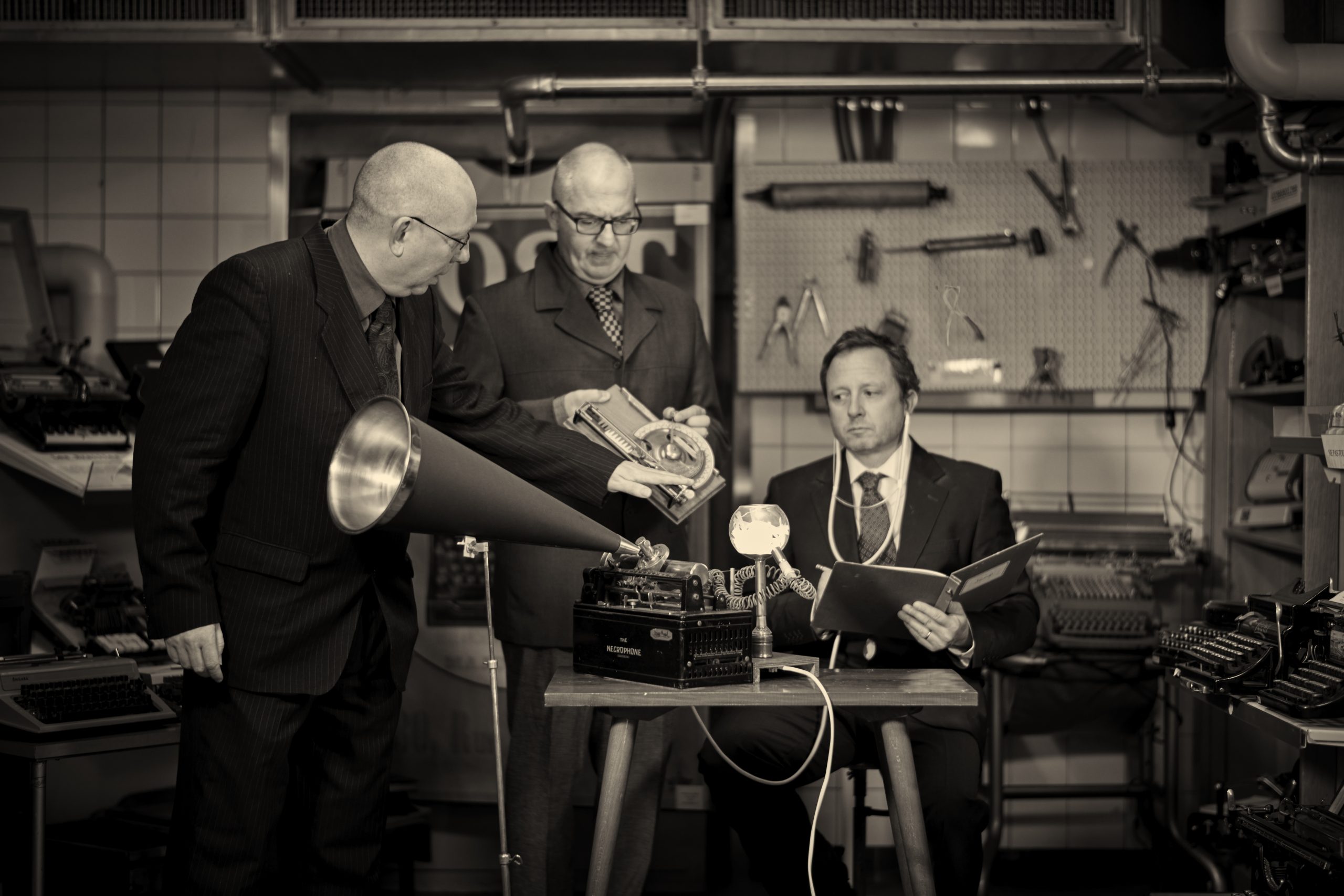 A few weeks back, I had the pleasure of writing up the premiere for Hemlock Smith & Les Poissons Autistes‘ comeback single “Comb the Ashes”, their first release together since their 2008 debut album. For those of you not in the know, Hemlock Smith’s solo work is rooted in folk music, whereas Les Poissons Autistes specialize in abstract electronic soundscapes. At a glance, it’s not necessarily an obvious pairing, but their debut record excelled at icy downtempo, reminiscent of acts such as Massive Attack at their most reflective. “Comb the Ashes” presented a new sound for the group – bleaker – with significantly improved sound design, and it instantly cemented their upcoming sophomore record as one of my most anticipated records of 2021.

Now, The Necrophone Sessions is finally here, and all the questions set up by “Comb the Ashes” as to what kind of sonic territory the unique pairing of Hemlock Smith & Les Poissons Autistes would occupy in 2021 – a decade plus since their last release together – have finally been answered.

“Comb the Ashes” hinted at a more abrasive album, with influences derived from early industrial music (back when industrial actually sounded like industrial noises being sampled into the music). While this is certainly true of much of the album, it is by no means an accurate representation of the whole. The Necrophone Sessions feels wholly committed to the ‘full-album’ listening experience, to an unusual degree even, given today’s streaming-centric music consumption patterns. As such, to appreciate what this album truly is requires you to immerse yourself in it fully, ideally in one sitting.

The reason for this is that tracks seldom comfortably fit into a single category, or follow an easily digestible structure. The track lengths of the album’s seven songs range from one and a half to 13 minutes, with an average track length of five minutes. Most of these compositions eschew safe pop structures in favor of a meandering, swelling approach derived from Les Poissons Autistes’ roots in painting abstract electronic soundscapes. New sounds and samples are usually layered into the songs as they progress, all while Hemlock Smith’s distinctive vocals coil and twist between the noises.

It’s quite the marvel listening to so many layers of noise – be they samples, traditional instrumentation, or vocals – co-existing, and how they can be heard as distinctive elements within an often sprawling whole. Album opener “Search the Shadows” is proper loud with its squelching noises, warped screaming, humming, anvil-clanging, string parts, and assortment of other noises, and yet, even when the vocals join the fray to take center stage, there is never the sense that anything is competing for your attention.

That’s not to say that the elements work harmoniously together, far from it. This is a deliberately off-kilter record. It’s frankly incredibly produced, and the attention to detail in where and how sounds fall together is an album highlight in and of itself.

When the record is at its most energetically charged, such as on my personal favorite track “Nowhere”, there is a pulsing sense of impending doom, but one that is taken head-on with unflinching cool and poise. This effect is accomplished by the impeccable trade-off between Hemlock Smith’s vocals – calling to mind a less vocally strained Tom Waits – and the distorted layering and menacing crunch Les Poissons Autistes relentlessly throw in his face. These darker, more climactic moments conjure a mental image of a whiskey-drinking, cigar-smoking gunslinger wandering through an apocalyptic wasteland that should have killed him (or her) long ago, but for some reason can’t quite seem to put them six feet under the ground.

It’s fascinating to listen to, and plays off the album’s quieter moments incredibly well, where the darkness is still there, but bleaker in tone in the absence of the brasher intensity of the album’s industrial-leaning pieces. “Krankenakte”, which is virtually devoid of percussion and vocals, illustrates this perfectly. It swells and rescinds – still layered – but with more space for a sense of doom to come in and sink into your bones, to nestle with your sinew. This interplay between aggressive and reflective is best enjoyed in one sitting, as it evokes an all-encompassing journey into darkness that just can’t be appreciated the same way in bite-sized pieces.

Therein lies the albums only ‘weakness.’ It truly is an album experience, and some of these tracks, when listened to on their own, don’t make quite as much of an impact. As someone who is not normally drawn to ambient soundscape pieces, tracks such as album closer “Black Friday”, when listened to in isolation, are not especially accessible. A sparse 13-minute soundscape, while impeccably produced and put together, doesn’t deliver the same impact when taken out of the context of the album, and I believe listeners such as myself who tend to appreciate vocals and more percussive elements in their music won’t find themselves returning to the more ambient moments – at least, not in the streaming/playlist curating context.

The Necrophone Sessions was never meant to be picked apart into bite-size pieces, and as such, it really isn’t fair of me to fixate on tracks that do or don’t work as well in isolation. The album is the cinematic soundtrack to an apocalyptic winter, a masterclass in sound design, one of the best records of 2021 so far, and well positioned to be one of my top ten albums of the year. While it isn’t always the most accessible listen, I expect the vast majority of listeners with an iota of patience will find immense enjoyment in unpacking the record’s incredible layers.