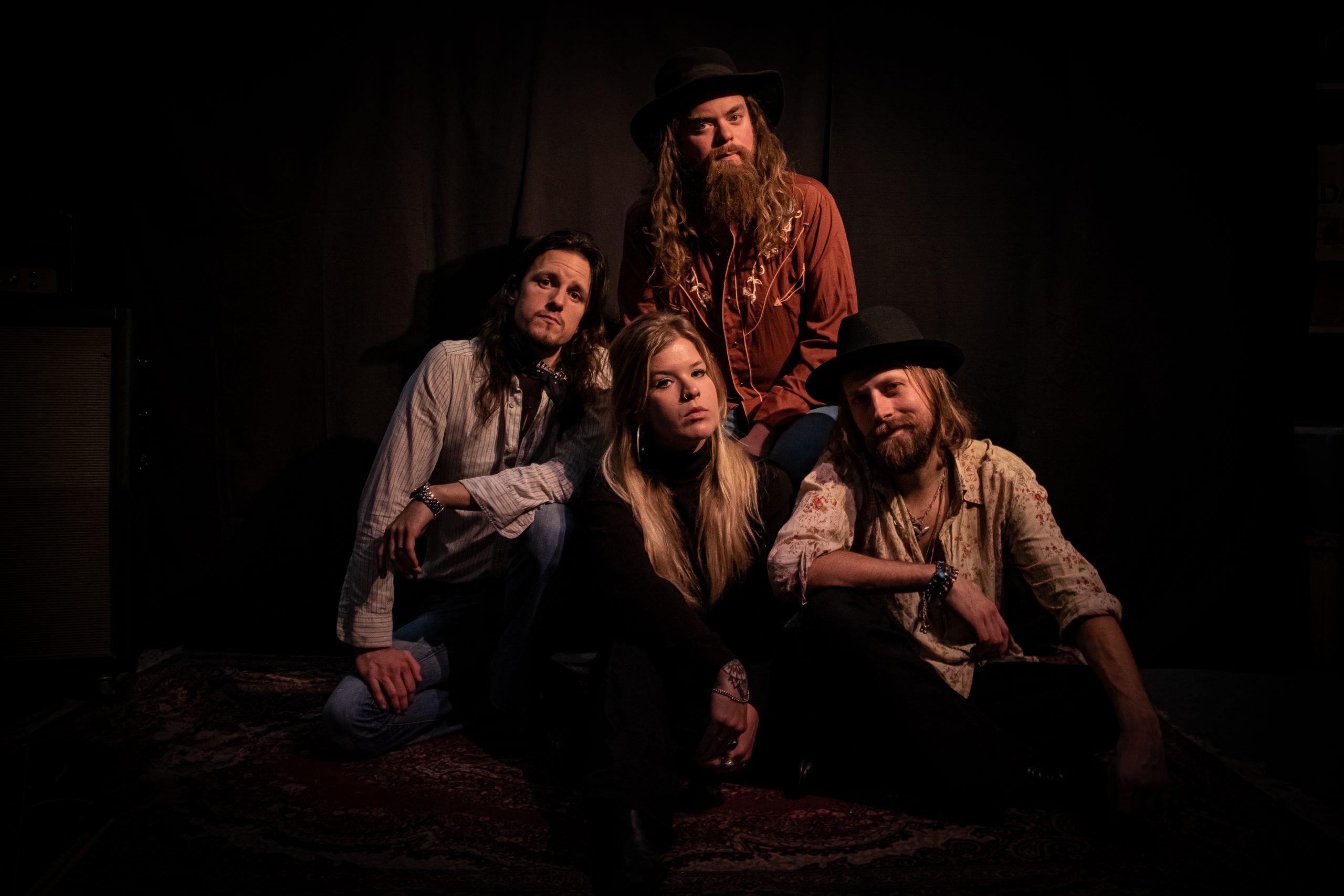 By Shaun MilliganApril 6, 2021 No Comments

Chewing through speakers with an infectious bite, the calorific cacophony of Heavy Feather‘s Mountain of Sugar will render you comatose as its fuzzy retro rock courses through your veins.

I like food. Not to the extent that I stage photoshoots snuggling in bed with a pizza (despite what rumours may claim), but I am a happy consumer. I’m the sort of person who, when dining out, never orders a starter for the simple fact that it would severely inhibit the likelihood of my stomach having sufficient storage capacity for a confection of some kind.

Well, if I’m not the luckiest little éclair in existence; Swedish vintage rockers Heavy Feather are here to give us all our just desserts, and boy oh boy do they deliver the delicacies with Mountain of Sugar. It might not seem to your taste on paper, but hear me out on this and I’ll do my best to ‘pud’ your mind at ease.

Following on from their previous course – 2019’s slightly less palatably titled Débris & Rubble – the Stockholm quartet have refined their sound on their second full-length, particularly with regards to overall tone and the playfulness of their musical exploration. Dipping into the flavours of various stylings and then slathering them with their signature rock sass, Heavy Feather know damn well that this record will find ass when it drops and quickly get to the business of kicking it with a sturdy vintage boot.

For the uninitiated, Heavy Feather take the staples of classic rock and blues, wrench them into the modern day, and jumble them up with lavish dollops of fuzz – even with a little country caked on in places. Blending all these motifs could be a recipe for disaster, but it’s executed exquisitely; it concocts a sound that, to my mind, resembles the resulting product of a raucous jam session between Fleetwood Mac and Rival Sons.

Their songwriting possesses a catchiness you just can’t ‘choux’, seamlessly melding past and present from the moment the thundering twang of opener “30 Days” kicks in. It’s Heavy Feather in a nutshell – the album too, as the colossal titular track whips up a staggeringly mammoth frenzy fuelled by riffing guitars and their flirtatious fretwork. The solos swagger with bluesy sweetness and invoke impromptu air guitar, with a ganache of effect trickery on numbers like “Come We Can Go” to boot. The record also succeeds thanks to syrupy bass guitar that features more than prominently in driving these tunes forward, and extensive percussion that ranges from clattering steadiness to lingering whimsy.

For me, the cherry on top is the vocals. Lisa Lystam’s voice oozes personality, her melodies mirroring the lead guitar work infrequently enough to avoid the trap of monotony while also highlighting just how tuneful some of those hooks are (try to shift “30 Days” from your mind in less time than the title challenges). Interestingly, “Sometimes I Feel” switches up the vocal duties in a move that renders the track like liquorice: you’ll either love its standout sound — complete with harmonica solo — or move along for another helping of the what the record serves up best, such as the charged, inverted-power-chord roadrunner that is “Rubble & Débris”. Wait a second… that title… I see what they did there. Sneaky.

Thus far I’ve only made reference to the saccharine, but rest assured that, over the course of Mountain of Sugar, Heavy Feather more than cater for the remaining taste buds: the music on offer here is anything but wafer-thin. “Too Many Times” gives you a meaty fix of slide guitar, while the ethereal textures of “Let It Shine” bring a tang of bitter sadness to an otherwise sweet-sounding number. Sourness also dwells within the lyrics of the aforementioned “Sometimes I Feel”.

Having overindulged in culinary and sweet-themed wordplay (did you catch ‘em all?), I’m sporting the lingering effects of multiple consumptions of this album. Boasting attitude aplenty and sprinkled with ballsy, feelgood, nostalgic noise at its helm, Mountain of Sugar leaves you with twitching eyelids, jittering hands, and countless cavities. But one gaping hole Heavy Feather don’t leave is the kind filled by damn good rock music that’s addictive as hell. Even as I type this, I’m going back for more. Better call my dentist.