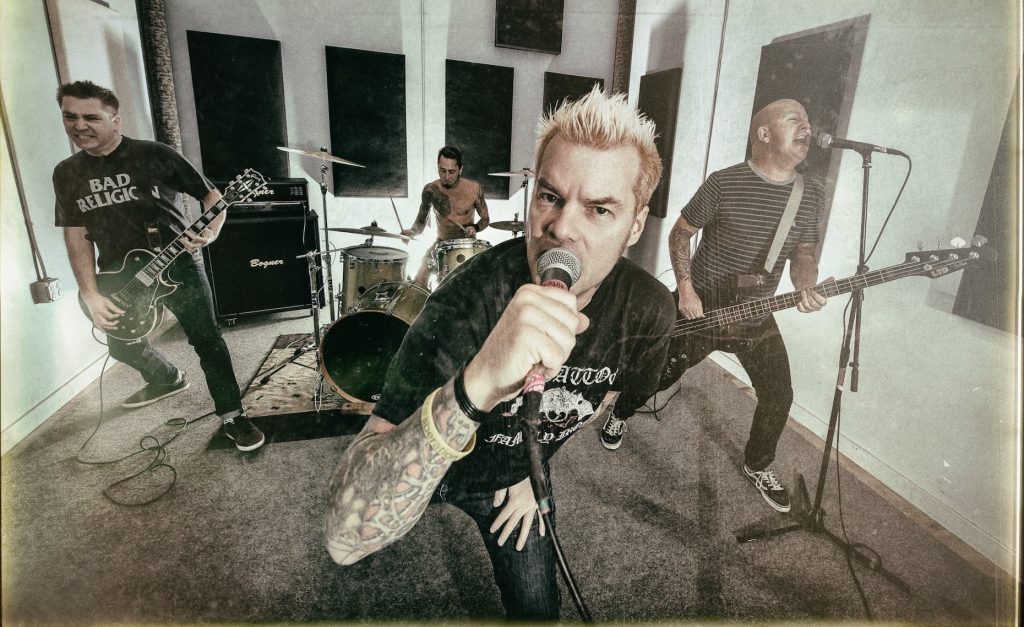 Thoughts and Prayers isn’t the record to bring SoCal Punk back, but it doesn’t put Good Riddance to shame. They still sound true, honest and critical. And who else are you going to listen to on the way to surf or skate that doesn’t sound silly?

Might as well get this out of the way first: Thoughts and Prayers is a terrible record name. For those who are not familiar with the band, it might give the idea that it’s a homage to war veterans or victims, and that Good Riddance might be some kind of Ted Nugent of California punk. It’s not, and they’re not – Good Riddance are politically aware and conscious in a way only 90s punk was, even though they have sounded more and more like your typical pop-punk band, and not like the top-of-the-game muscular California punk rock sound of their crown jewel Comprehensive Guide To Moderne Rebellion for the better part of the last decade. In fact, that’s what made them so appealing and standing out from the Fat Wreck crowd: instead of just singing about having fun or making fun of others, they took a stance.

Pop-punk; now there’s a genre that is a contradiction in itself. Punk should be everything but popular, and is expected to at least not sound like your regular middle of the road top 20 one-hit-wonder. That clearly does not happen here, which is why Good Riddance are definitely worthy of being put into a different category. One where Satanic Surfers or Pennywise could easily fit in. Sound-wise, though, Good Riddance seem to be getting a lot more mellow in their old age.

At times conjuring other veterans like NOFX and Bad Religion – something that might be considered good if the band had a different track record – Russ Rakin’s interventive lyrics continue to be as focused and sharp as ever. He also still shares his internal struggles alongside his political ones. For these guys, politics is not the run-of-the-mill ‘fuck the government‘ attitude. Instead, their words are carefully thought out and would probably get a nod of approval from Bad Religion’s Greg Graffin, like in “Precariat”: ‘And we will overstate our worth/We can devastate the earth/Calamitous, vociferous, and desperate/Over-reliance on disdain let the protagonist remain/Abandon all who whisper this refrain’.

The main thing missing in the 2019 version of Good Riddance that was a mark of their classic phase is some of the rashness and speed of records like Operation Phoenix, and the emotion and melancholy of unforgettable songs like “This Is The Light”. It’s not that Thoughts and Prayers isn’t good, because it is – it just pales miserably when put up against their older stuff. Part of the reason might be the fact that their main audience has certainly grown older with them, and Good Riddance might not sound as appealing to people in their 40s and 50s as they did to the same people in their 20s. Maybe, similar to what happened with their label mates NOFX, some of their older listeners are even in denial about how much they loved and listened to the band. Let’s face it: they sound pubescent, which isn’t necessarily a bad thing if it’s done properly instead of merely faking some teenage drama. Good Riddance don’t fake anything and hey, The Ramones also sounded like a bunch of teenagers, so there you go.

Good Riddance may seem unimportant in the world of punk-rock today, a world with very few big names (particularly when compared to the late 90s), where thousands of small bands record seven-inches and then disband. Surely most of the band’s older fans have grown out of punk and, by proxy, of them. They probably won’t give Thoughts and Prayers a try; hell, they might even be unaware that it is out. Including the return of Pennywise and Satanic Surfers, you can count on the fingers of one hand the number of melodic punk-rock bands that have put out good records in the last decade or so. Mainly because the thing these days is power-pop and not Californian punk, which frankly sounds dated most of the times.

Thoughts and Prayers might not be the record that’s going to bring SoCal punk back, not for long-time fans that will definitely miss the balance of the faster songs with those sweet, sweet ballads, and certainly not for any new fans that might be out there. But that doesn’t put the band to shame, at least since their comeback. They still sound true, honest, and critical. And who else are you going to listen to on the way to surf or skate that doesn’t sound silly?