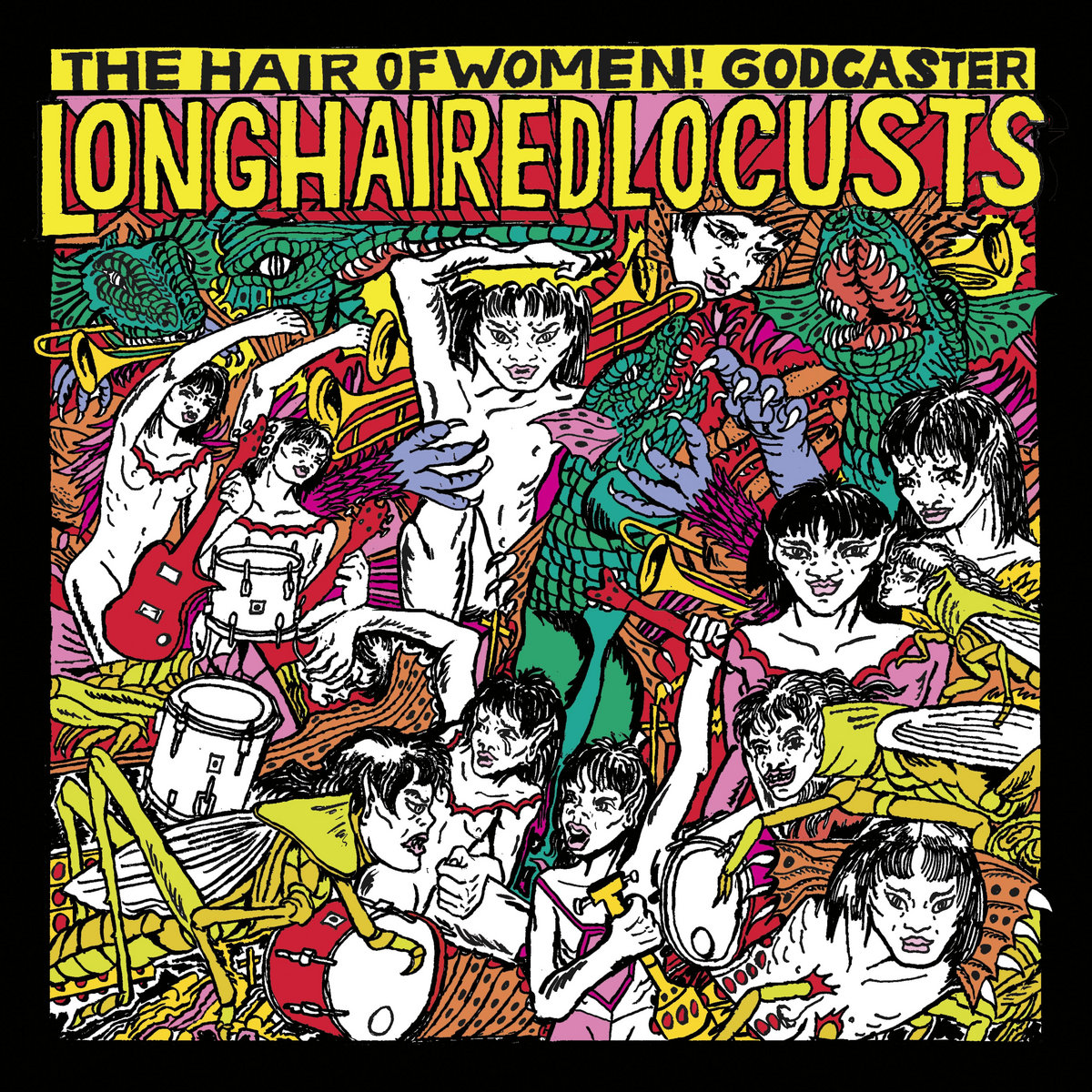 Had a bad day, week, or year? No problem! Godcaster‘s new album, Long Haired Locusts, will cheer you up with its eccentric, raucous grooves.

Life’s hard, and life isn’t fair. I think that’s something we can all agree on. It’s been a rough year, and as the saying goes, ‘you can’t polish a turd’. However, as you may know, you can cover it in glitter. Godcaster’s quirky new album, Long Haired Locusts, has been my glitter to a particularly faecal week – I am delighted to have discovered this album when I did. Its catchy tracks, iridescent tones, and unusual vocals have bounced around inside my head so constantly now that I feel I have taken on some of their lightness and vividity. Are you grumpy, frustrated, stewing in existential crisis? Let Godcaster take all of that off your mind for a while. And, if you’re already in a good mood, Long Haired Locusts will give you an extra boost.

If I had to describe Long Haired Locusts in one phrase (which luckily I don’t, hence all the other paragraphs), I think it would be ‘eccentric, buggy fun’. That may not make too much sense to you, but I promise, it will. It’s the kind of album you could put on in the background while having dinner with older relatives, and they probably wouldn’t notice it, but if they paid attention, they would be appropriately appreciative and/or weirded out. There’s an energy about Godcaster that I haven’t really experienced before – some songs are almost punk in attitude, while others are gentle and lullaby-like. One image I found myself returning to, over and over, when listening to this album was that of an old-school animated kids’ film, with this album as the soundtrack.

The first song I heard off Long Haired Locusts was the marginally inappropriate, but very catchy “Sexy Heffer”. I initially misread it and have associated the song with cows ever since; living in a very agricultural part of the country, where all the radio ads are targeted at farmers, means I now know a lot more about cow insemination than I ever thought I would. Bovine connections aside, though, I enjoy this song exactly like the rest of the album: more and more with every listen. It’s very straightforward, featuring essentially just one repeated verse and a sick as fuck bridge, eccentric vocals, and very few lyrics – but it makes me groove.

My first thought upon hearing “Sexy Heffer” was it sounded like The Mighty Boosh’s interpretation of Sleepytime Gorilla Museum, a description I feel applies to a lot of the album. The end of “Apparition of The Virgin Mary In My Neighborhood” specifically gives off this vibe, jerky guitars doubled by a flute, skeletal and leporine. There’s a prevailing use of dissonance in unexpected, unusual places.

A highlight for me is “Don’t Make Stevie Wonder”, not just because of its delightfully punny title, but first and foremost because of its outstanding bass line. It’s a great example of a simple, solid, driving groove. Plus, there are some great vocals, both as the lead and as backing. All of the elements are simple, but great in combination, even if – or precisely because – they’re contrasting rather than complimentary. Plus, it features a badass synchronised riff, and I can always get down on that. The bridge deconstructs itself, going into an almost psychedelic fusion breakdown, before the guitar pulls it back together, but not before Godcaster allow themselves a final nightmarish build-up.

Initially, I was concerned that I wasn’t going to get into Long Haired Locusts, and for one reason only: they have a flute player. I taught flute for four years, and I didn’t even really like it before that; its stereotypically lovely timbre riles me up to no end, plus I’ve met way too many snooty, showy flautists over the years. I absolutely understand the flute’s purpose in the context of Godcaster’s sound, though, and it’s an integral part of Long Haired Locusts. Plus, its timbre is perfect for blending in with the various disgusting synth and guitar tones on the album. Godcaster frequently balance a guitar line on one side with a flute and synth copy of the same line on the other, and their incorporation of glockenspiel and trombone further expands their sonic scope.

Long Haired Locusts is kind of strange to write about. A lot happens in its brief 38 minutes; it’s hard to pick out what’s important and what’s not. And, let’s be honest, if I read that a guitar line was ‘skeletal and leporine’ in someone else’s review, I’d have no damn clue what they were talking about. It’s a fun album to write about, because I can say things like that and feel like they perfectly fit the music, but it sure as hell won’t help you understand what I’m trying to say. I think the point is that Long Haired Locusts is full of contradictions – in my initial notes on the album, I described the guitar tones as being ‘nightmarish, vague yet precise’, the bass as being ‘gummy yet growly’, and the overall vibe being ‘kind of Beatles, but way more fucked up, and churchy’. Certain songs felt like they would be cool both slower and way faster, and overall, there was a strong sense of confusion: I don’t get this album, but I also don’t feel like I have to. It contradicts itself, it challenges me, and it’s awesome.