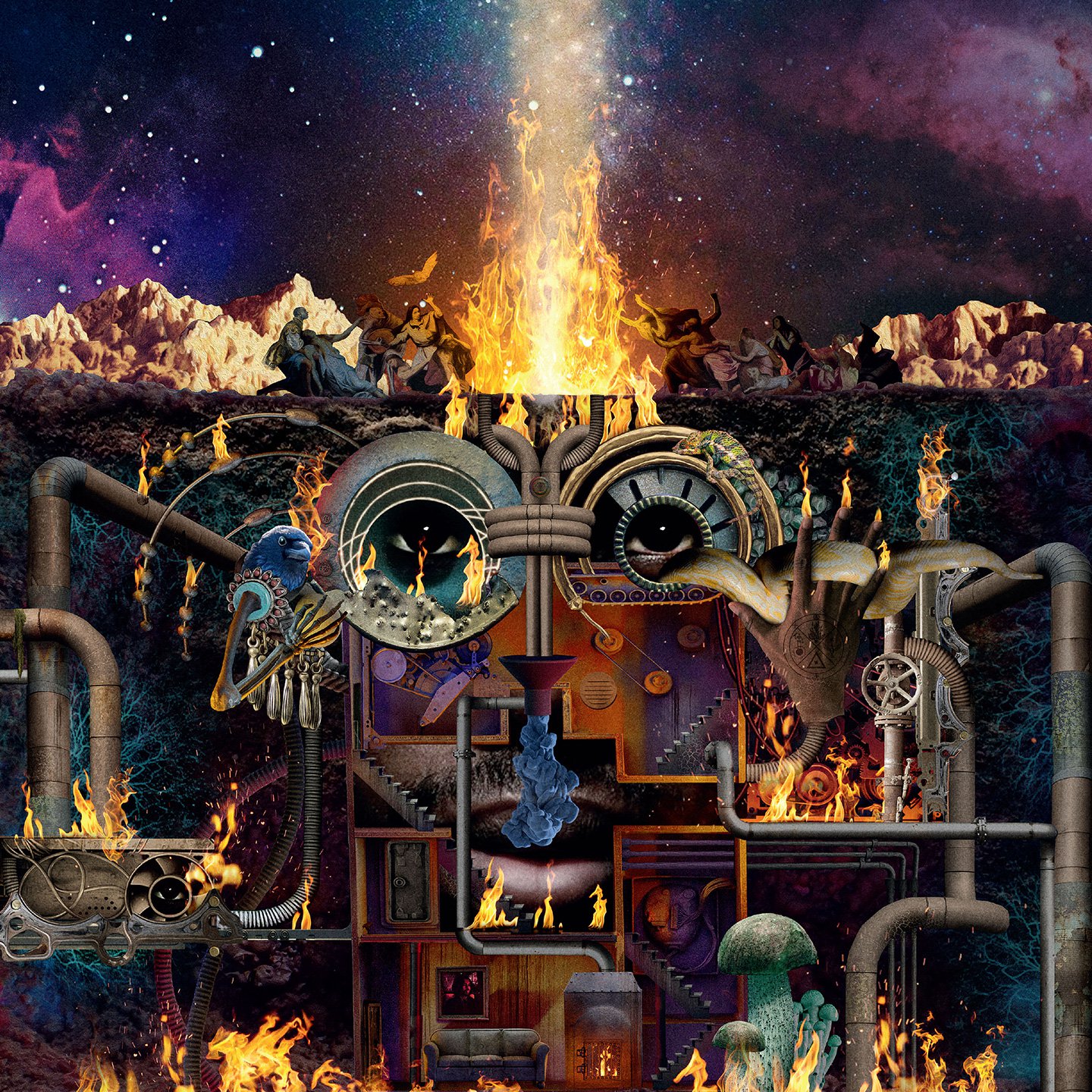 By David RodriguezJune 5, 2019 No Comments

It’s always lit when Flying Lotus drops an album. Five years in the making, Flamagra is a studious effort of lush, frenetic soundscapes assisted by friends almost as weird as he is.

Flying Lotus has always infatuated us with his frenetic electronic expressionism by-way-of mostly hip-hop and jazz funk flavoring. He’s been a busy dude developing his own label, Brainfeeder, into a force to be reckoned with in the music world. Among the roster are artists like frequent collaborator Thundercat, Kamasi Washington, Louis Cole, and many more. It’s been five years since he’s dropped anything substantial and he had something transcendental to follow up in You’re Dead! Well, if that was the death of an individual, then Flamagra may signal the end for many more, if not all of us. And there’s a veritable cast of characters to help accent FlyLo‘s own quirkiness on this journey.

It’s not a coincidence that this album sounds like it was named after a cool fire spell in a Final Fantasy game or something. Flamagra has a theme of fire tying it all together, as well as just being straight up fire in terms of quality. The producer and rapper imagined an uncontainable fire raging throughout a city like Los Angeles and how it would play out. Song titles, lyrics, and ambient noises like crackling fires all draw the music close together so no matter how lockstep FlyLo gets with the future funk or how many weird flakes he sprinkles into his stuff, there’s a throughline piercing into all parts like a kebab skewer.

It all starts out normal enough. Fluttering basslines, off-kilter drums, Dragon Ball Z sound clips – you know, normal shit. But even ‘normal’ seems to have an unconventional meaning for FlyLo. If you know his work decently enough, it’s nothing out of the ordinary and acts as a control to compare the more experimental limbs of his work to. I mean, dang, the first feature of many that we hear is Anderson .Paak who dominates “More”. He ices up the production cake baked up by FlyLo which includes an early beat change a minute in that really puts the soul into motion and unleashes .Paak to do what he does best (unfortunately, the video for the track above only captures “More” from that beat change forward). The legendary George Clinton and enigmatic Little Dragon get similar treatment with their own song setpieces with “Burning Down The House” and “Spontaneous” respectively.

I found the midsection to be the most interesting, or weird if we’re being blunt. “Pilgrim Side Eye” is a title worth a chuckle, but the warping instrumentation of it is like a sci-fi funk slapper that would be on a ToeJam & Earl playlist. We then get to two of my favorite features here with Tierra Whack and Denzel Curry. The former, an experimental rapper and indie darling, is a wonderful fit on “Yellow Belly”, complementing Flying Lotus‘ weird streak with her own. The beat is somehow both minimalist and extravagant. The unorthodox structure sounds like someone snuck into FlyLo‘s studio and started pressing each button on his drum pad controller (assuming he has one – I’m sure he does). Three crispy slaps here, four snare shots here, a triplet of bass kicks over yonder, a shimmering chime riff; it’s very eclectic and not at all what you would expect for a rapper to rap over, but uh… let’s just say Tierra Whack has no problem keeping up with her stream-of-conscious-esque non sequiturs.

And Denzel… woooo, Denzel. “Black Balloons Reprise” is basically his song as the title implies, referencing his dreamy single from TA13OO, with some nice touches and ambiance from FlyLo singing in the back of the hook and harmonizing with some choral ‘ahs’. Denzel takes things in a more upfront, dark tone that works with the greater theming of Flamagra with bars like

‘The children of the world always meets a doomed end
The earth will soon end
We all perish, all parents, all kids, all buried
Cemetery, ceremonious, find me at my loneliest‘

There are many more shining moments of outlandishness. “Actually Virtual” sees avant-garde hip-hop group Shabazz Palaces assist on the track, the beat of which sounds like a stampede of cosmic horse feet clopping throughout space. “Fire Is Coming” has a spoken word bit from David Lynch which is… probably exactly what you would expect it to be, and then again maybe not. The beat evolves into an energetic, panicked structure, fitting to soundtrack the refrain of ‘fire is coming!‘ And this was the lead single! An eyebrow raiser for sure, hearing this song as the first piece of music from FlyLo in five years was certainly something. For the uninitiated, maybe there’s some steep barriers to climb with a record like Flamagra – it’s the producer’s wackiest work yet, but still manages to stay grounded enough to keep your feet comfortably flat in places. It’s almost like he promised to make someone a tasteful, conventional mixtape, but decided to cheekily add some zest to the formula in order to challenge them with some zany blindsides.

Flamagra seems engineered to snake its way into every space in your head, knocking away all the cobwebs from areas that have lacked stimulation for months, maybe years. Much like a wildfire, this album burns every inch of the space it occupies, but pacifies itself soon after in order to show the fertility left behind and the atmospheric seeds planted in the mind’s soil by the masterful soundscapes. FlyLo plays to his strengths of making smart, dynamic music with conventional approaches which makes it so much fun to digest over and over. Fans will have their love reinforced, newcomers will embark on a trip unlike many others around right now.