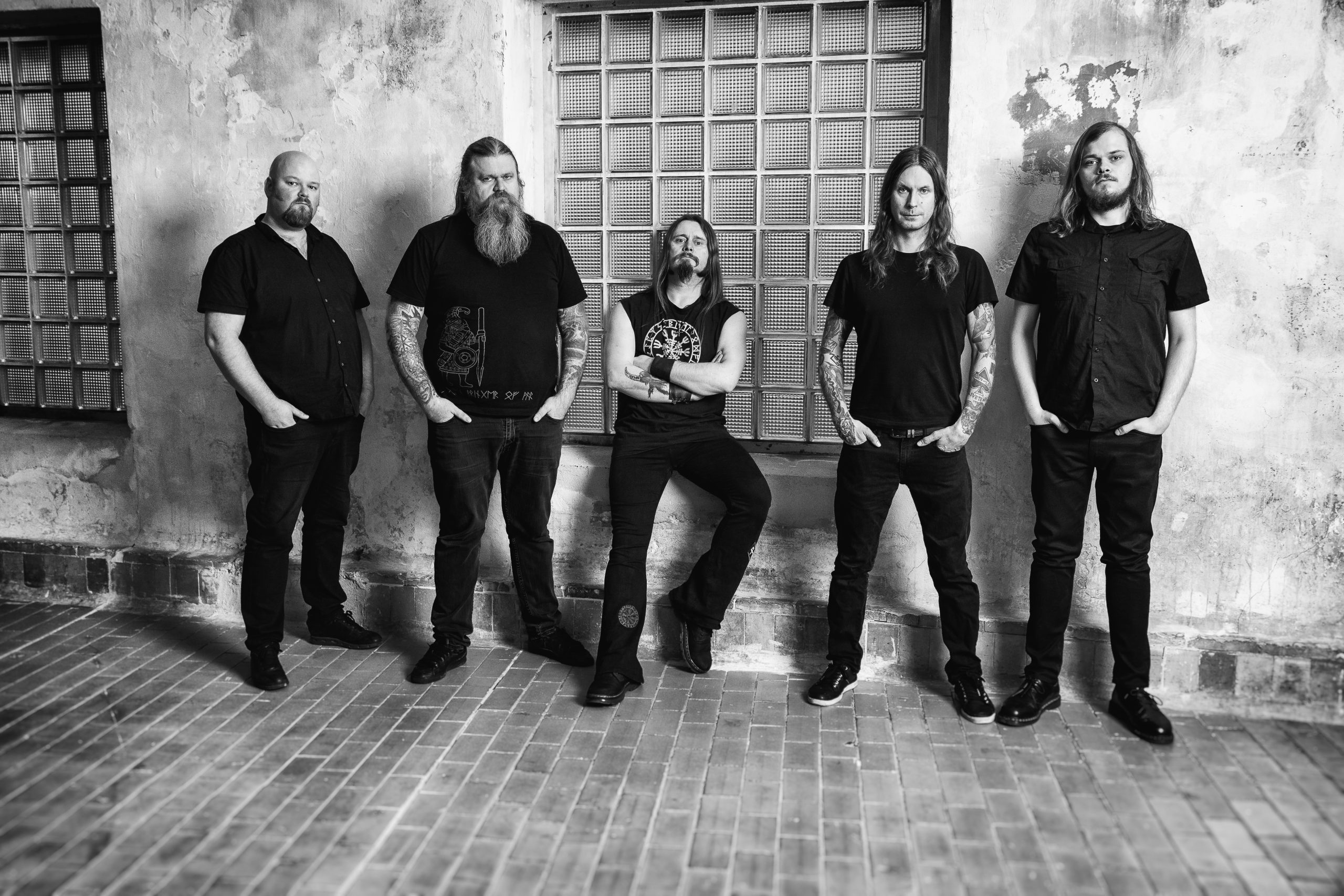 By David RodriguezOctober 23, 2021 No Comments

Enslaved will always be a special band to me, but nothing could really prepare me for the meaning Caravans to the Outer Worlds would hold during a time of personal turmoil.

So… this review is weeks late. I’m not one to be tardy, but I had a bit of a family emergency to handle, and it just threw my whole shit off for quite a while. This is the first review I’ve written in almost a month – the longest I’ve gone without drafting something, anything, up – and the project I have to return to is a special one; one that I have a new appreciation for with the huge delay.

I’d assume you wouldn’t click on this without knowing who Enslaved are, as they are a very storied metal band with a rich 30-year history, but in the spirit of discovery and acknowledgement that not everyone knows everything, I’ll give y’all something. Enslaved were a Viking/Norse-flavored black metal band in the ’90s, hailing from Norway – where all good Viking/Norse-flavored black metal come from – but then the new millennium happened. Literally with their second album of the 2000s, 2001’s Monumension, they moved more into a proggy direction and got ever so slightly less harsh and blackened. This was, to me, a net positive movement, even though I wouldn’t get into the band until 2015’s In Times. With several line-up changes over time, they’ve had a strong core of three members (Grutle Kjellson, Ivar Bjørnson, and Arve ‘Ice Dale’ Isdal, all taking on various roles short of keyboards, drums, and clean vocals throughout their time) for about 20 years now.

So, Caravans to the Outer Worlds. I won’t lie – after a couple listens, I thought of dropping this EP and not reviewing it. Not because it was bad or I didn’t like it, but I just wasn’t grasping onto much to talk about within its 18-minute runtime. I try to use my writing time very wisely, and I want to make sure I have something worthy of saying about a project, that’s all. This alone was a little concerning to me. Enslaved are one of my favorite bands – was I leaving them in my past? Was I subconsciously growing tired of their Norse mythos-drenched epic metal? Then, my mom ended up in the hospital.

I won’t go into too many details, but suffice it to say it was the worst condition I’ve ever seen her in, which is saying something. It wasn’t an accident or anything, just a gradual slip into serious illness that could have killed her. I spent days with her at the hospital not thinking of much else, as I was still unsure if she’d pull through as intact as she was weeks prior, or at all. Luckily, the hospital she was at was walking distance from my home, which meant hearty treks back and forth when I wasn’t spending the night with her. I didn’t much feel like listening to music, especially for review purposes, which requires a bit more attention than throwing on an old favorite or something, but I decided to give Caravans to the Outer Worlds another go.

It was… different now, like I saw (heard?) something in it that I didn’t before. For days, I had been coming to terms with the worst of things while hoping for the best – had my second-hand brushes with mortality opened up my mind for the cosmic journeys held within the four tracks of this EP? I have no explanation, but I can tell you how it felt.

I’ve never been a religious or spiritual person, and I don’t think that’ll change any time soon, but I do appreciate the ideas of afterlife and other worlds/dimensions beyond our known, corporeal one. I don’t know what happens when we die; I don’t know if there’s other planes of existence, let alone how one would get to them. Enslaved channel pretty specific beliefs, mythologies, and stories in their music. Hell, their last album was called Utgard, the anglicized name for one of three chief worlds (Midgard and Asgard being the others) connected to the sacred tree, Yggdrasil. It’s in this Norse theming that Enslaved are strongest, not that I’ve known them to be any other way – they evoke the power of its gods, the chaotic mischief of its tricksters, and the mass and size of its revered giants.

Caravans to the Outer Worlds is best taken as one long piece, as it’s constructed as such with smooth transitions and lovely movements to make everything feel so natural and lush. Here, we see Enslaved at their most progressive, calling forth portals to sail through to the eponymous Outer Worlds. We hear the windswept atmosphere guiding this caravan of ships. We hear tension in the ropes of their construction, steel meeting steel, wood creaking, and gods communing on the fate of warriors left standing. At least, this is what I hear between the first two tracks – the title track and our first interlude, “Intermezzo I: Lonnlig. Gudlig.”. A fantastical picture is painted of a journey unknowable by us as humans on this plane, though perhaps deeply understood by those that believe in it all. I don’t get the idea that this EP is about death on a micro, or even a macro, scale, yet I couldn’t help but read it as such because of my situation.

I walked along dusty, paved, sun-baked roads to and from the hospital, flanked by barren fields of dead grass, ant hills, and groundhog burrows. I was my own caravan, between the known world of my home life, calm and secure from much of life’s anxieties, and the hospital outer world where my mom’s life as I knew it was hanging in the balance for several days, where things weren’t particularly calm or secure. Several times, I marched back and forth, and only a couple of them were accompanied by Enslaved‘s palpable, immense progressive metal. Clean vocals reverberating through my head – ‘Esoteric navigation/Through the astral storms‘. Thundering drums not unlike my own footsteps as I piloted my out-of-shape body uphill both ways (seriously). Rapid-fire guitar solos mimic the constant hum of engines from below as I walked across a highway overpass.

I started to really meld with the music mentally. It was easy enough, since I could run through this EP almost a full two times in one walk. When I would come home at sundown, the red-orange sky almost seemed to shimmer in response to the synths at the end of “Intermezzo II: The Navigator”. It was calming in a time when I needed it.

I thought back to when I first watched the video for the EP’s title track and how the hooded warrior in it clutched a sword in hand on her journey until the very end. Where was my sword? Was it the strength I had to conjure when around my mom to show her that things would be okay? Was my sword the music, one of the things that gives me the strength to get through hardships like this? Maybe it was something more unknowable, intangible. My mom would say it was God – Christian God – because that’s what she believes in. It’s what makes her calm and secure in ways I or nothing else in this world can, and I think in a way that’s beautiful, even if I don’t believe in it myself.

If nothing else, this experience is a testament to how music can really attach itself to you and your memories. Now I won’t be able to think of this EP without thinking of my mom in the hospital. This may sound sad, but she’s out now, home where things are calm and secure, and doing a lot better. If the hospital was an outer world for us, then I’m thankful for its healing to my mom, but I’m more thankful that she’s now out of there. I’m also thankful to have Caravans of the Outer Worlds along with me. Though I didn’t see its full potential at first, it’s now entrenched within me in an immovable, special way.

If you want a more conclusive wrap-up/epilogue of my thoughts on the actual music, then know it’s an interesting step forward for Enslaved. Their music for years has been larger than life, men calling forth the power of ancient gods to create epics not unlike the poems and prose of centuries past. Caravans to the Outer Worlds is deceptively colossal for its size – you may see an EP of 18 minutes, but within is a spiritual missive to the unknown, where the voices of gods can be found within strummed guitar strings, the pounding of drums, and the layered striking of keys. Really, it’s what music is all about: evocation and relation, speaking to us all in different ways as long as we are open to hearing the message.