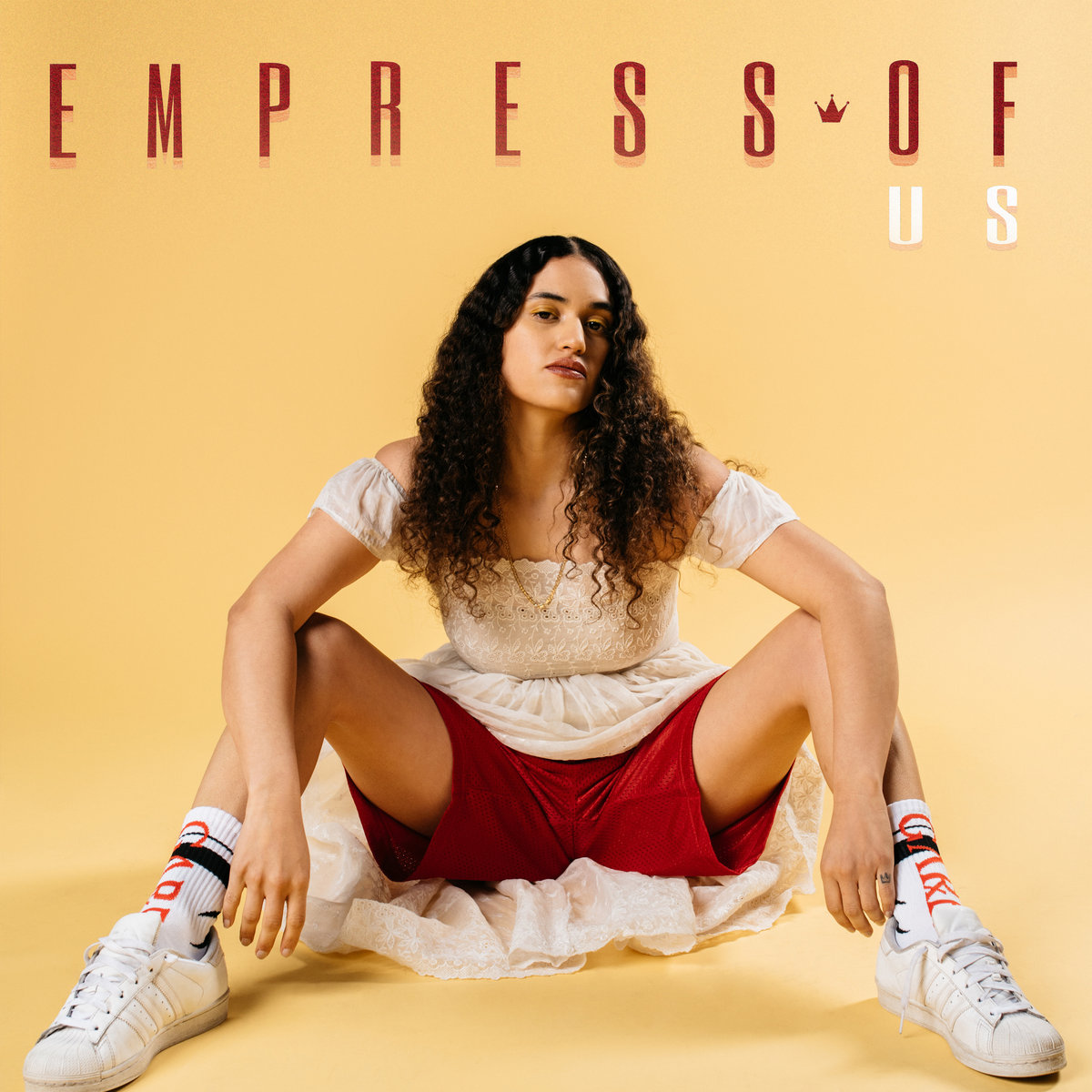 By David RodriguezOctober 28, 2018 No Comments

Us retains the personal feel of Empress Of‘s music, but opens its dreamy doors so we can all be touched by her soft approach to modern pop. A milestone of music in 2018.

Oh boy, I’ve been waiting for this! I love Empress Of. Inspired by a fateful tarot card reading, it’s the stage name for singer Lorely Rodriguez (no relation, unfortunately) to which there are two albums, a couple of EPs, and a handful of loose singles attributed. Her 2015 LP Me was raw, affecting, and personal. Us is all of that with the addition of broadening ever so slightly so as to allow for audience relation: ‘I want it to be like a mirror, and [the audience] sees a little bit of themselves in every song‘, says Rodriguez of this approach. And does it ever.

That’s the crux of this album and its greatness. It’s personal in the sense that the details flesh out a realistic account of a maturing life coasting by you with lyrics expressing a full range of emotion, pleading with lovers, ruminating on past pain, independent declarations of self in the face of jealousy and ‘meat market’ dating, and more. Some of the lyrics read like text messages between two people, playfully navigating a relationship where familiarity is earnestly felt to a warming effect:

‘Something about your body makes me feel so safe
I want you on top of me like a paperweight
Don’t be too busy for me, it’s a Saturday
I like to give you a hard time, hope that’s okay‘

One of the main reasons verse after verse of Empress Of is so affecting is because of Rodriguez’s delivery. “Just the Same”, where that verse is from, has her voice rise and lower much like a sine wave. Or, you know, the ups and downs of a relationship. This also happens on “Everything To Me”, where Devonté Hynes (Blood Orange) assists on the hook.

The production has been leveled up for Us, but doesn’t mark a drastic change for the artist. This is great since the dreamy, cloudy beats that accompany the vocals fit together so well. “Trust Me Baby” is about as distressing as Us gets with Rodriguez singing in Spanish, ‘Respétame/Yo soy tu igual/No soy un animal/Al que salvaste‘, which translates to ‘Respect me/I am your equal/I’m not an animal/The one you saved‘. Lyrics later reference a snooping partner going through texts, speaking of how their love suffers when trust is called into question. All along there’s reverberating synths, snappy drums, and a general air of upbeat dreaminess. It’s a nice contract, especially when Rodriguez’s voice never gets profoundly pained so as to make the pairing awkward, choosing to stand her vocal ground and let the words and enunciation to the emotive work. Simply spectacular.

Other highlights around the album are “I Don’t Even Smoke Weed” (same, Lorely), which has some contributions from the lovely Chrome Sparks and Spain’s own musician Pional. There’s a little bit of a twinkle in the beat after the hook that’s danceable. “Timberlands”, a reference to the (un)official boot of New York culture (where Rodriguez resides, in Brooklyn), is a tough-willed, no-nonsense personal statement of independence, taking shots at ain’t-shit men and would-be suitors. Bass knocks hard between claps, vocals weaving throughout the beat, soaring high above the hazy production. I’ll also shout out “I’ve Got Love” for its exceptional catchiness and use of dynamic synths.

Us feels most impactful when you really treat it like a companion, as intended by the artist. I listened to it on the way to work at dawn, on my walk home after dozing off on the bus and overshooting my stop by a mile during dusk, at the store walking down the food aisles wide-eyed because I made the very smart decision to shop while hungry, and at home while I write this very review. Rodriguez’s sweet candor, her production choices to complement that, even down to her quite selective use of guests musicians, everything is done in great service to create a soft and gentle aesthetic that cradles you from hour to hour if you let it. If you were to get on my cloud and demand a more concrete admission, I’d simply say this is one of the best pop album of 2018.

In the end, I really enjoy how honest this album is. It doesn’t feel sugar coated and sickly sweet like a lot of pop, but it’s also not harsh so as to be cynical or leery. Us navigates a seldom trod middle ground that leaves room for the ideal, but stays realistic throughout, always hypnotizing with its gentleness. Empress Of has crafted a masterwork of modern pop for all of us to enjoy, and enjoy we shall.