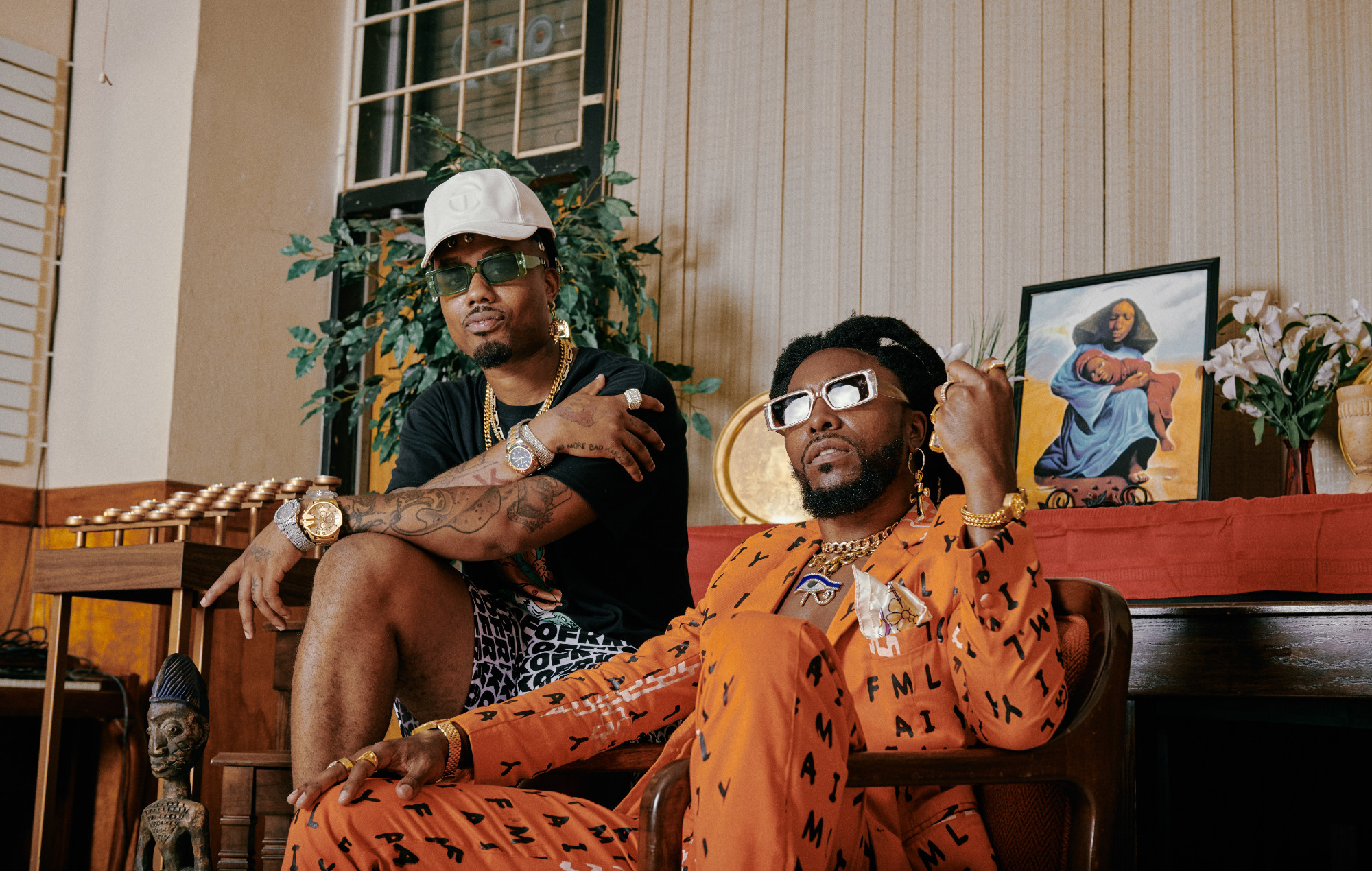 By David RodriguezMarch 12, 2022 No Comments

EARTHGANG are more grounded than ever as GHETTO GODS focuses on the most complex and endearing creatures ever: ourselves.

‘Ghetto gods – diamonds in the rough. You know it’s hard to see the greatness when they tell you, ‘You ain’t gon’ be shit‘ or when they tell you, ‘You ain’t shit‘. While they step on you, walk around you, light shit, but we know better than that. Straight out the mud, out the trench. Sayin’. Havin’ that glow now. That shine, that polish, you feel me?’

So begins the tragically delayed GHETTO GODS, my most anticipated rap album of the year (and last), with a relevant musing from 2 Chainz on its intro “THE GLOW”. It sets in motion the overall theme of the album: finding the light within and fostering it, uplifting it and therefore yourself. It’s about ‘finding the God in you‘ EARTHGANG say. The Atlanta duo have a very keen ability to imbue their music with a sort-of esoteric spirituality – one that isn’t exclusive and insurmountable, but comforting and as dedicated and literal as you want it to be. It’s not even required to engage with in order to enjoy their off-beat, funky, washy brand of hip-hop that is, yes, quite reminiscent of the duo that put Atlanta on the map, OutKast, and I promise this is the only time in this review I’ll mention that.

No matter what EARTHGANG choose to rap about, they always come off so damn smooth about it. Olu (Johnny Venus) and WowGr8 (Doctur Dot) have a lot to say with their music. What benefits them greatly is just how casual and approachable to come with it all. It’s akin to talking to friends about more serious topics – conversation feels deep, reflective, and with growth in mind, but with a sense of levity that takes the weight of your shoulders. There’s jokes, there’s stories, and seemingly endless ways to relate to each other while unraveling it all.

As the name implies, EARTHGANG is all about the macro – the bigger picture of recognizing others as much as ourselves, reminding us to keep an open mind about things, and making sure that no matter what we ultimately care; about ourselves and others. It’s not quite as preachy or in-your-face as that may sound. I think both rappers do a fine job of wrapping their points and thoughts into digestible yarns, rapped with impeccable flows, each bar playing with notions of language and expression in fun, interesting ways.

“BLACK PEARLS” is a tight, bumping dedication to Black women, sexualized and fetishized because of their bodies, demonized for speaking up for themselves or having an attitude. Baby Tate assists with an empowering verse and a closing declaration to all the ladies in need of a self-check (‘I just wanna say to all my little booties, my little boobies, my big bellies, my thick thighs, my real bodies out there. Bitch, you look good, okay?‘). The next track “NEEZY’S WALK” is a lovely, yet harrowingly truthful spoken word by poet Lynae Vanee:

‘The scariest thing about being a Black woman?
You can’t close your eyes on the scary parts
You gotta be your own candle after dark
Just a haze ’til you turn into somebody’s streetlight
Having a body to defend, but a body not allowed to fight
‘Cause that body is already a disciplinary infraction‘

It all leads up to one of the album’s great singles, “AMERICAN HORROR STORY”, where the pair reflect on their lives brimming with hardship and persevering despite it all, and how modern America is horror for the most marginalized among us. Over a glittery, guitar-driven beat, Olu traces back to his roots in American slavery up to his life now being the first person in his family with money, acknowledging he could lose it all in the blink of an eye (‘What about the police come at my crib and shoot me up?/Life hard enough, just think about rent‘). WowGr8 is all about community uplifting in his melody-heavy verse, advocating for mutual aid and helping each other out while keeping people who claim superiority in check.

‘Seat at the tables sound so amazing
I’d rather bring you to my cookout
Citronella tiki torches
Talkin’ ni**as joining forces, linkin’ up the resources
Brothers shinin’, sister gorgeous, show the kids how we did it
…
Some of y’all ni**as so woke, it’s ironic
You really be ignorant ’cause of your knowledge
Look down on your brother ’cause you went to college
Or you got the perfect collection of rocks and stones
And gems that soak up the mood
Say you’re open minded, know it ain’t true‘

For all the knowledge EARTHGANG drop, they, like your friends, love to have fun as well, and they aren’t exactly mutually exclusive. “BILLI” is the body-mover of GHETTO GODS (okay, there’s a couple, one of them being the aforementioned “BLACK PEARLS”). With a tough, bassy beat and a Future feature, it’s an indulgent track that sees EARTHGANG chasing (more) bags because, as Olu says, ‘it’s hard bein’ a ni**a, it’s worse bein’ poor‘. It becomes less shallow when you consider the group’s penchant for breaking that generational and community curse of poverty. My five-figure-a-year-making ass feels more comfortable rooting for WowGr8 and Olu to get enough money to fill a vault and swim in it like Scrooge McDuck because I’m confident they’d do their fair share of uplifting. That’s what GHETTO GODS is all about, right?

I stopped myself from writing (at least) two more paragraphs about more songs (including some tasteful J. Cole slander) because things are getting long already, but that in and of itself is a good selling point for this album: I can’t shut up about it. Literally every song is worth talking about, even if it’s not of a particular vibe that works for you. There’s a theme to dissect, there’s a topic to discuss, there’s a beat to ride for fun – the best songs on GHETTO GODS have all three. This is a relatively hefty 17 tracks, and not a single one misses. It wouldn’t be an exaggeration to say this album was well worth the wait.

GHETTO GODS is one of those albums that makes every moment worth it, even the skits, which are equal parts illuminating and funny (“ZAZA” with comedian/actor DC Youngfly is a good laugh leading into “SMOKE SUM”). Overall, it’s a snapshot of Black Southern life, some through the eyes of our two star protagonists, some through just about everyone else surrounding them, all with a message of unity and uplifting each other and ourselves. It’s almost anthological in its variety and keeps from spreading too thin. EARTHGANG continue to be a duo you can’t quite nail down, playing with everything from rugged trap to spacey, abstract sounds to forge one of hip-hop’s most interesting acts currently going. GHETTO GODS, a wondrous statement on its own, will perhaps be one of many stepping stones that lead the group to legendary status.