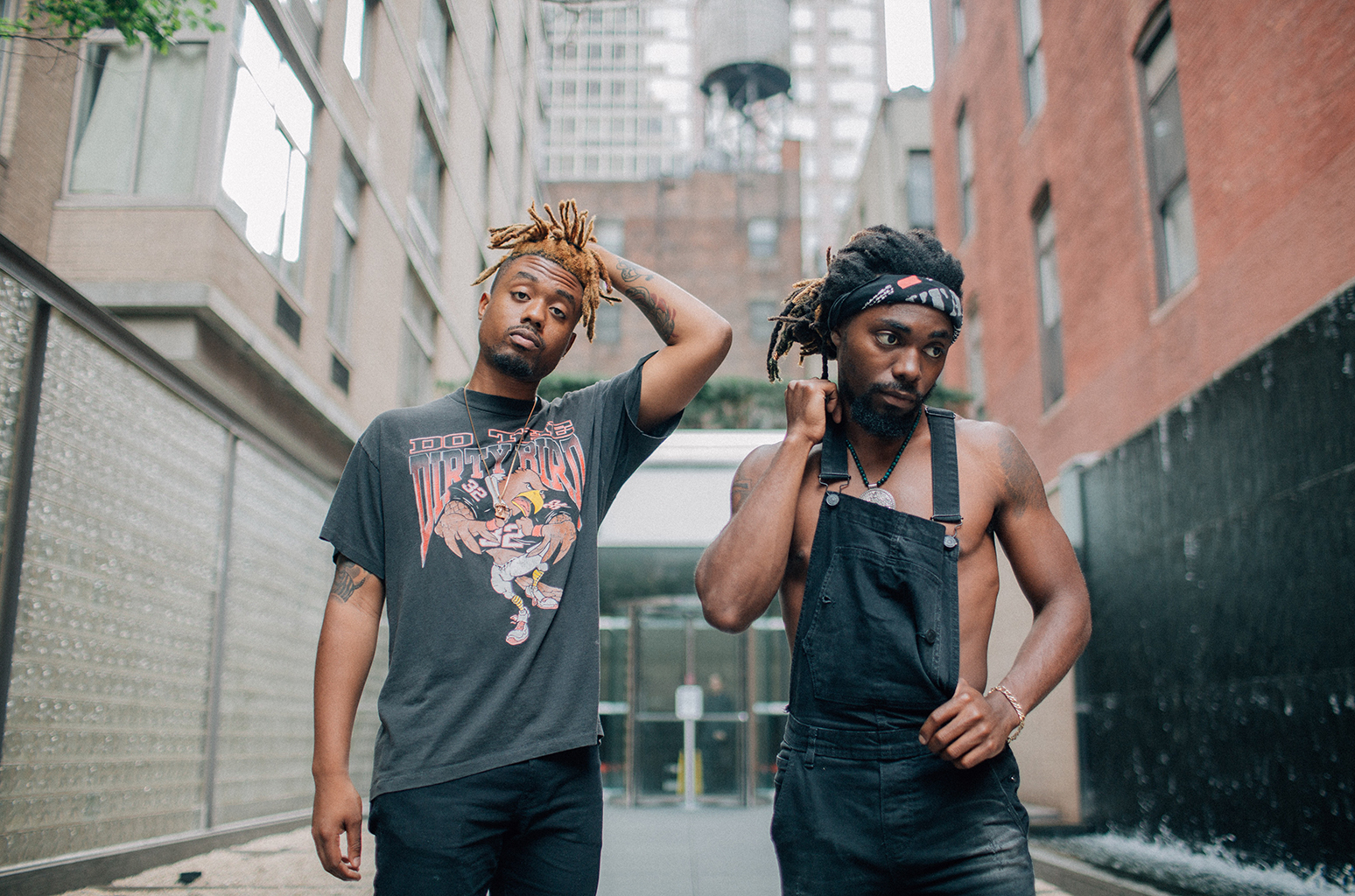 By David RodriguezOctober 6, 2019 No Comments

You could interpret EARTHGANG‘s existence as upholding an artistic legacy of a rich region, but to do so would miss the forest for the trees. The exuberant, perceptive duo impress effortlessly with their debut album.

People have been talking wild shit about EARTHGANG, hip-hop’s latest fixation on torch-passing and second coming of legends long past. ‘They’re the new OutKast!,’ many a blog and errant fan has said – including me, though not as definitively. It’s not a bad thing to be the new OutKast, but the Atlanta duo are more concerned with carving their own path. I only became hip to them after hearing their feature on Rico Nasty‘s criminally overlooked Anger Management project on the track “Big Titties” (you get one guess as to what that song’s about, and you’ll hopefully only need one), but they’ve been around for a while. With Mirrorland, we get transported into the heads of rappers Doctur Dot and Johnny Venus for a purple-tinted presentation of Atlanta that’s uniquely theirs, hyperbole and all.

As far as the OutKast stuff goes, it’s an easy comparison to make, if not a little low hanging despite being meant in a flattering way. EARTHGANG are from a different Atlanta. As Doctur Dot says, ‘ain’t no “Spottieottie”, sorry bro,‘ though to be fair, they’re more ATLiens than anything else. I get it’s hard not to see them in the shadow of monumental greats like Big Boi and André 3000. Hell, Mirrorland has a vibe evocative of their 90s efforts – afrofuturism, showman-esque flamboyancy, a liberal spritzing of vague spirituality (particularly in the tarot card-themed art for the album and its singles), and, well, two quite distinct voices powering through beats, both soulful and drum-heavy burners.

This ain’t the 90s anymore, though – Atlanta has changed, and not only is there a new guard of cultural ministers, they also have amenities that old heads probably couldn’t have dreamed of. I’m not just talking about the trap beats that the two play with in songs like “Bank” or “Proud Of U” either – seriously, can you see the eclectic “UP” making it in the 90s hip-hop scene? The high-soaring, slightly left-field banger may be the second song on the album, but does more to establish a thesis for EARTHGANG than the actual intro track as Johnny Venus raps:

‘You’re in my world now, I make the rules
I say who lives, I say who dies
I push the button, I save the kids
Delete your crew, call me John Q‘

Mirrorland is a fitting name, calling to mind circus sideshow attractions with loudly dressed callers looking to persuade people into distended tents filled with sleight-of-hand, mind-bending stunts, and experiences that violently clash with your expectations of reality. This is EARTHGANG‘s Atlanta: a diverse city brimming with tricks and treats to unfurl with a truly beauteous side to behold, as made evident on tracks like “Top Down”. This song goes hard, utilizing rumbling bass and a soaring, catchy hook that paints a picture of the rappers’ outcast (*ahem*) lifestyle: ‘Top down and I’m floating through the city/Watch out, deputy out to get me.‘

The best part of this album is that EARTHGANG know when to ride slow and low, and when to feed the engine a bit. Mirrorland is well-paced, with only maybe a track or two that could have been cut in order for a tighter turn through the inevitable loop you run this album on. One of the songs that you shouldn’t cut is “This Side”, a track that sees Venus and Dot looking within, contending with intrusive thoughts of anxiety as well as seeing their peers get struck down in cold blood, at least for the first half. This Dot half-verse in particular is artful, exemplary of the duo’s wordplay and casual vocal gait even when addressing very real issues:

‘I’m a product of the need to purchase
Drop bars like I’m losing service
Roll my Rs when I feel exotic
Hit the blunt like a damn pinãta, ay caramba
I was a beast, now I’m the jungle
Now I’m the wind, now I’m the rain, the climate change
I crack a joke to hide the pain, it doesn’t work
We scratch the surface, we tip the bird
Don’t give a fuck, we not concerned, it could be worse‘

Paired nicely with “This Side”, “Swivel” is a track that returns from the Revenge of the Dreamers III label compilation album from earlier this year, but it functions very well on here as another somber, sobering throughline by which the harsh realities of Atlanta are laid bare with no smoke or mirrors. If that’s all a bit too much to handle, you can drown your sorrows in “Tequila”, a playful track featuring the oft-underutilized T-Pain, or the jaunty and sensual “Blue Moon”. This is one of those albums that has a little something for everyone. EARTHGANG don’t try to please everyone, they’re just being themselves; opening the book to their lives and reading us excerpts to excite and educate is more than adequate to form a versatile project to add to their already diverse discography of tapes and EPs.

Mirrorland demands respect for EARTHGANG as artists coming into their own, the key word there being ‘own’. Compare them to whoever you want – they proudly carry their own freak flag, bearing the ostentatious free-thinking and honesty that has done many an artist good by simply embracing it to the fullest. Dreamville has their wild card in them now, and I look forward to seeing what the rappers to do shake things up in the near future with their elegantly funky, Southern hospitality by-way-of millennial (un)realist hip-hop that sacrifices nothing. They may not be the heroes Atlanta needs, but they’re the heroes it deserves.