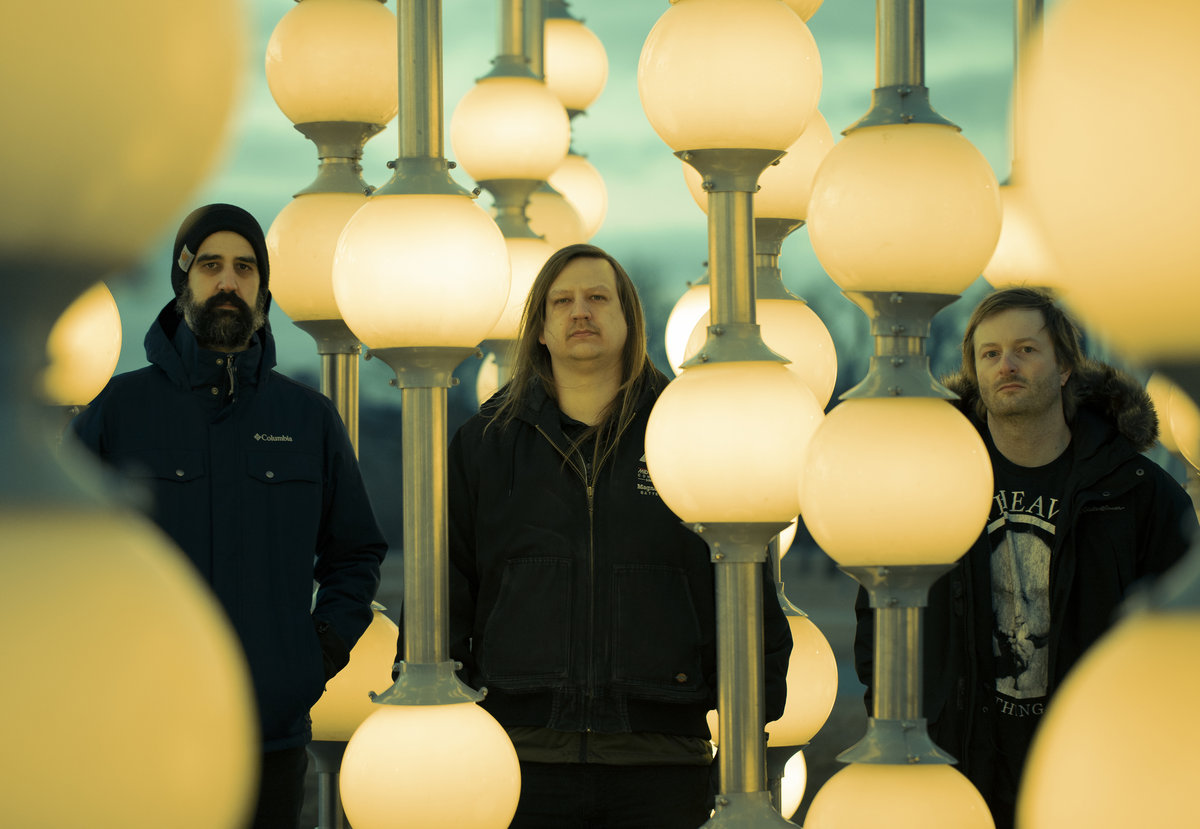 Druids return with another instant classic – Shadow Work is littered with catchy grooves and riffs and will leave you wanting more.

When you see Pelagic Records associated with a release, you are instantly guaranteed quality. I have yet to come across a record they have been involved in that has been poorly put together. Having put out some of the finest records of the past while from the likes of Shy, Low, Som, Playgrounded, and countless others (bonus points for managing to press The Machine is Burning and Now Everyone Knows It Could Happen Again by Everything Is Noise favourites BRUIT ≤), the fact that they have picked up Des Moines trio Druids for the release of their latest record Shadow Work could only be a good thing, right?

With two full-length releases and two EPs to their name, Druids have been trudging along for the last decade or so, releasing riff-heavy, powerful music that they clearly enjoy making. Flick through their back catalogue and you will find a little bit of everything interspersed throughout their releases, from blues-laden guitar to classic in-your-face rock with a nice blend of heavy yet melodic vocal lines. Previous releases, particularly 2019’s Monument, have piqued interest in the band; as such, 2022’s full length release Shadow Work has a high bar it needs to reach. Thankfully, the band aren’t afraid of heights, and Druids have managed to pull off another masterpiece with this latest album.

“Aether” works fantastically as an album opener. Drums and bass unite to set the pace, letting atmospheric guitar and vocal chanting take precedence. Druids give us a brief insight into their world here, keeping things relatively gentle with a promise of louder things to come. It doesn’t take long for this promise to come to fruition, with “Path To R” exploding the album into life. Whilst everything suddenly feels louder and a bit more metal, the groove still holds sway here. The three-piece play as one, instruments dropping back and letting others shine through as and when needed. The jam-like session that plays out the second half of the track is an early highlight, somehow seeming as simple as it is intricate in its delivery. The bass in particular, and we’ll no doubt mention it again later, deserves special attention here. It really gives the track an extra layer of bite and drives the record further forward.

“Ide’s Koan” brings that bass straight back to life with another beautiful rumble – this track showing right from the outset why it was chosen as one of the lead singles from Shadow Work. There is a little bit of everything that Druids excel in on show here, with blues-laden guitar, haunting vocals (including of the spoken ilk), and a mix of sludge and full-on classic metal give plenty of space for the trio to show off their writing skills in its eight-plus minute duration. “Hide” is a little simpler in its complexion but remains one of my stand-out tracks from the album on repeated listens. Drums and bass pound through the opening, before cymbal crashes, melodic guitar, and strained vocals pull you in. “Hide” is without doubt a track that I’d love to hear in a dark, sweaty venue at loud volumes.

“Dance of Skulls” is where Druids dive a little deeper back into the creepy world they created with Momument. A lot of repetition in the initial stages pulls the listener into a bit of a trance before jumping between groovy riffs and jam sections to keep you on your toes. The middle section of the track is where it really shines though and appears to be what inspired the track name, just close your eyes and you’ll think it is your own skull that someone is dancing a merry jig on – another real stand out moment from Shadow Work (as well as that abrupt ending to “Dance of Skulls”; simple but very effective).

Penultimate track “Traveller” is a nice little reprieve, jumping back to a simple structure that requires a little less careful listening. It has come up a few times in this review, but the marriage of bass and drums throughout this track (and indeed album) is what really holds Shadow Work together. You can almost hear the chemistry here on “Traveller” and, like elsewhere on the album, the groove the rhythm section creates allows the creativity of the guitar to cut through. As one of the few shorter tracks on the album, “Traveller” feels like a warm-up for a big finale. So it transpires, with album closer “Cloak-Noir Bloom” being another form of a Druids greatest hits encompassed in a single track. Like “Ide’s Koan”, there is a little bit of everything here, including some of the heaviest moments on the album. I am going to really nitpick here, but this track provides my only tiny complaint from the album – I probably would have directly swapped the placement of “Ide’s Koan” with “Cloak-Noir Bloom”, just to really finish with a bang. That’s not to say the closing track isn’t powerful (it most certainly is) – it is a fantastic closing track and another great representation of the tight band that Druids have become

Suffice to say, Druids have pulled it out of the bag again, producing yet another wonderful collection of songs with just the right blend of heavy and melodic. Shadow Work has a lot going on, and repeated listens only pull you further in, hearing little intricacies you might have missed on the previous listen. It is an album that deserves to be listened to loud, as loud as you possibly can. If that means you need a physical copy, Pelagic Records have the pre-order open for a vinyl pressing right here. Either way, make sure to give this record a chance – you won’t regret it.