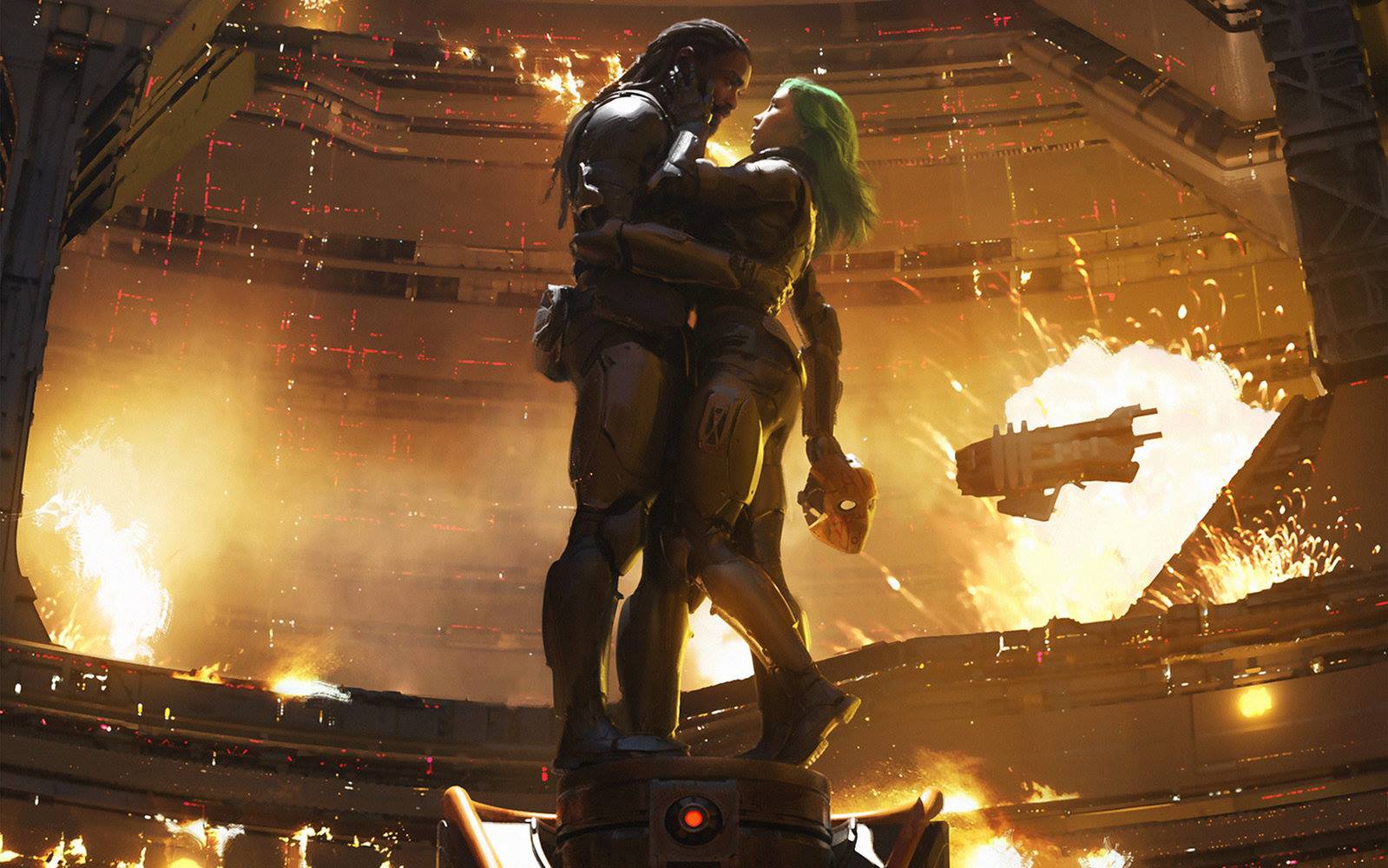 Coheed and Cambria – “Vaxis – Act I: The Unheavenly Creatures”

By Landon TurlockSeptember 28, 2018 No Comments

Coheed and Cambria‘s ninth full-length is a grandiose yet self-aware return to their conceptual universe, and, despite some imperfections, an excellent addition to their impressive catalog.

If there’s a band in the new millennium that has pushed progressive rock further than Coheed and Cambria, I would be hard pressed to tell you which act that is. Perhaps it is their ability to be hugely ambitious and intensely intimate at the same time, but there is something that has continued to captivate many people, or at least the staff of Everything Is Noise, even nine albums into their career. This is probably not a surprise, considering our recent dive into the lore of The Amory Wars and our two-part career retrospective of the band. Never satiated, we are pleased to bring together three of our editorial staff – David, Dominik, and Landon – to discuss Vaxis – Act I: The Unheavenly Creatures.

Now that I got that out of my system, this will be as tempered of a review as possible. Vaxis – Act I: The Unheavenly Creatures marks a momentous point in Coheed’s lifespan for sure, but for me, personally, reviewing something like this is pretty… complex.

Maybe you’ve read my tour through Coheed’s catalog leading up to Vaxis – Act I. If you did, I hope you liked it, but, really, a nice shortcut would have been to just listen to this album. In it, they incorporate elements, structures, approaches, and progressions from all over their near 20-year lifespan. It’s the most Coheed album they have released, self-referential and aware. It makes sense as this is their triumphant return; back to The Amory Wars story, back to, what many consider, the ‘real Coheed’.

Coheed’s straightforward prog side is ever-present in “The Dark Sentencer” (a top contender for song of the year for me), their weird prog side permeates throughout “True Ugly”, acoustic ballad Coheed wrests the heartstrings from your chest with “Lucky Stars”, and so on. It’s like a well-rounded anthology of songs that are still fresh, with new tricks up their sleeves. Did you hear the chiptune synth intro on “Unheavenly Creatures”? You likely either loved it immediately or cocked one eyebrow up in bemusement. There’s other synthy segments like it elsewhere.

There are a number of hair-raising moments on this album. “Toys” still gives me chills when I hear the energetic main riff, the intro to “Queen of the Dark” is epic and atmospheric, the return of the prologue’s melody in “Old Flames”, gang vocals – it’s all extravagant. Coheed haven’t forgotten where their strengths lie and capitalize on them at every opportunity. For fans, it’s like finding loosely incorporated easter eggs. For others, they stand to be heavy, melodic progressive delights, if a little cheesy occasionally. Okay, a lot.

Aside from a song that could’ve been cut (“The Pavilion (A Long Way Back)” doesn’t seem to fit narratively), the one thing that even gets close to grating on my nerves is some of the lyrics being pretty standard for the band. Claudio’s delivery is great, as always, but without knowing the exact intended contexts of many of the songs and their lyrics, it can get a bit samey. Then again, what is great lyrically is so loudly singable and annoyingly quotable (the hooks in particular), the blemishes are easier to overlook than most.

Hearing Coheed do what they do best really warms my heart. I don’t think there’s a greater feeling to me as a music fan. This is the most important band to me and while they aren’t perfect, taking everything in brings me to tears. This album is quite a treat worthy of repeat after repeat, falling somewhere in the middle of the spectrum of enjoyability for Coheed – if any fans wanted a blunt assessment. ‘Middle’ for them is still stellar all things considered. This is the beginning of a new era, and I’m happy to come along for the ride.

To understand how much it means to me to be reviewing the new album by Coheed and Cambria, one must first learn what this band has meant to me ever since I discovered them. Their music was always a trusty companion, in prosperity and adversity. Even through the drastic changes in musical tastes I experienced in recent years, they remained a constant. For me, saying that Coheed are my favorite band is like saying that water is wet or the sky is blue – a self-evident tautology, an irrefutable fact that continues to be true under all circumstances.

Vaxis – Act I: The Unheaveny Creatures bears a twofold significance, since 1) it’s a new release by a band that left a profound impression on my very being, and 2) it marks their return to the overarching narrative that shaped a majority of their recorded output, the only exception being 2015’s The Color Before the Sun. Therefore, it’s imperative knowing what to expect from this album before going into it.

In short, Vaxis – Act I is a delectable grab bag of the band’s different stylistic periods. Whether it’s the angsty, volatile post-hardcore of SSTB and In Keeping Secrets (“Toys”), the grandiloquent prog ambitions and meticulously crafted backing vocals/ad-libs of the Good Apollo cycle (“The Gutter”), Year of the Black Rainbow’s industrial-tinged synth darkness (“Night-Time Walkers”), or the ballad-heavy, atmospheric alt-prog of The Afterman (“Old Flames”): traces of each phase Coheed and Cambria passed through over the years can be spotted throughout the 15 tracks, alongside some new additions.

I deliberately omitted TCBTS from the above numeration, because sadly the one song that does hearken back to it – “The Pavilion (A Long Way Back)” – is also the one that’s the least integrated into the main (musical) canon of the album. Written in the wake of this more real life-focused release, it feels almost like an afterthought, artificially tacked onto the story.

One of my favorite things about Coheed has always been the self-referential nature of the lyrics between the individual records within The Amory Wars saga, so I’m glad to report that this feature has made its return! Words like ‘mother’, ‘bastard’, and ‘goodnight/goodbye’ that reappear on Vaxis – Act I have long functioned as small anchor points in the story, appearing at different points connected to various characters and situations, making it a gleeful pastime to try and track down these intertextual tidbits of lore.

If one thing’s for certain, it’s that Coheed and Cambria are back at the peak of their potential. Vaxis – Act I captures the same magic that made me fall in love with the band all those years ago, and it’s filled to the proverbial brim with passion, vigor, and larger-than-life choruses. I can’t wait to learn where the four remaining chapters of Vaxis will take the C&C universe; for now, though, there remains but one thing I need to get off my chest before signing off:

‘MOTHER, COME ON OUT, SHOW ME WHAT THE WORLD IS ALL ABOUT!‘

I am going to preface this review by saying that I have a Keywork tattoo and that there is no artist that I have loved as intensely or as long as I have loved Coheed and Cambria. So when I say I am trying to be objective, keep in mind that it may be difficult.

Over their nine albums, it seems to me that Coheed have developed four recurring song types: huge epics (“Welcome Home” and now “The Dark Sentencer”), emo/pop rockers (“A Favor House Atlantic”), acoustic ballads (“Pearl of the Stars”), and less obvious, more experimental progressive rock pieces (“Apollo I: The Writing Writer”). We get all four types on Vaxis, but that’s not say that Coheed repeat themselves here. Though “The Unheavenly Creatures” flows in a similar vein as the emo/punk of “Ten Speed”, the use of chiptune synths and more developed choruses shows Coheed’s maturation. More experimental, darker tracks like “Black Sunday” show the band slowing down and using some more haunting melodic choices than I’ve ever heard in their catalog, to dramatic effect. Even the record’s ballad, closer “Lucky Stars”, shakes the by-the-numbers descriptor with use of a more positive tone and a closing jam that takes the song into classic rock/prog territory. All of these varying tracks are given a glossy sheen and melodic attention that Coheed developed on The Color Before The Sun.

It may sound like I’m giving the record away, but, considering its fifteen tracks and eighty minute run-time, that would be hard to do. Vaxis is Coheed’s longest record by nearly ten minutes, and almost runs at the combined length of the 2012/2013 Afterman double albums. For fans like myself, there may be no such thing as too much Coheed. However, even I might say that the album itself doesn’t necessarily justify its length – although no song here is a misstep, a few start a bit bland (“The Pavilion”; “Night-time Walkers”) only to be saved by huge choruses, and others almost get weighed down with cheese at certain points (“Old Flames”). Whether they had cut tracks or streamlined the arrangements on some songs, Vaxis – Act I had potential to flow in a more compelling and accessible way than it does. But then, the pacing of Coheed albums have never been as much about accessibility as they have been about immersion, and, on the latter front, Vaxis succeeds.

Regardless, this record is a formidable return to The Amory Wars. Its subtle lyrical references to past records (my favorite of which is working ‘Welcome home’ into the refrain of “The Dark Sentencer”) will not alienate new fans, but reward old ones. Vaxis could be a bit more streamlined than it is,  but there are so many excellent moments on this record that a few meandering ones are more than forgivable. While the record may not be my favorite installation in Coheed’s catalog, this is hardly a criticism considering the heights the catalog reaches, and may be my favorite work of theirs in a decade.

If you want to dive further into the complex mythology of The Amory Wars, our editor Tyler explores the lore in an upcoming four part series. David, who joined us on this review, also provides a two-part career retrospective for Coheed and Cambria that you can check out.