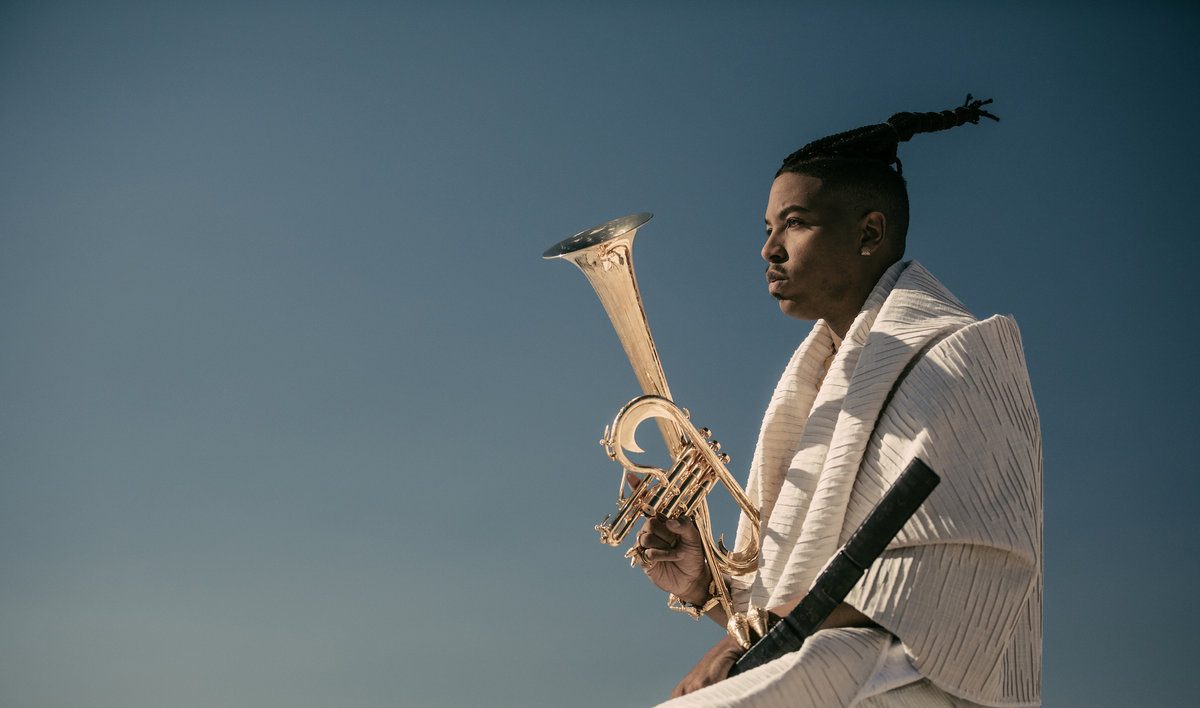 By Pete OverellSeptember 20, 2020 No Comments

Axiom might be the best Christian Scott aTunde Adjuah record to date, capturing an intimate performance that captivates the mind and imbues you with creativity.

In March of this year, Christian Scott aTunde Adjuah and his band played five shows at the Blue Note Jazz Club in New York, right before the country and world locked down for the pandemic. During the sessions, he took old songs and reimagined them for a live audience, whilst also driving out incredible new tracks which capture the passion and inspiration behind the lead composer. Christian Scott has been driving out high-quality content since the first decade of the ’00s, with his stature growing to the point where he helped write the lead track for the latest Bill & Ted movie, even starring in the film himself. Yet in my opinion, Axiom is by far and away the best content he’ll be releasing to us this year, for a number of reasons.

This encompassing ninety-minute (excluding bonus tracks) album is a true delight, offering accessible yet mind-shatteringly creative music that imbues with a different set of emotions each time. Often, during and after listening, I feel empowered to achieve and create myself, other times I feel like purely relaxing. During a spoken introduction taken from the live show, Scott highlights how each track is an attempt at a new take on the genre, which is evident in the very futuristic soundscapes that mix and mingle effortlessly with the more classical jazz influences. Every second feels like innovation, even on tracks we’ve heard already like “Diaspora” – especially with the extra emphasis on the percussion.

As you move through each track in the album, you’ll pick out what I mean. The djembe and congas played by Weedie Braimah absolutely steal the show, just as much as Scott’s trumpet. The exquisite solos provided by the drums in numerous tracks lift you out of the comforting and dreamy clutches of the rest of the composition for moments of pure energy. The effect that they have is quite confusing; my ears know that they are what I’d consider more classical folk instruments, but their deployment within this body of sound makes them feel so new, fresh, and almost futuristic.

Yet it isn’t just the drums that bring this record to life, there are so many more elements. I loved the piano work on the first track,  “X. Adjuah (I Own the Night)”, and the flute work throughout the album, but most notably on “Huntress”. Each track has a personal touch to it, which when understood makes the movements even more powerful. “Huntress” is dedicated to the resilience of New Orleans women, especially his mother, whilst “The Last Chieftain” is dedicated to his grandfather and uncle, who were a massive driving force in his journey to becoming a world-renowned artist. Both tracks are obviously crafted from a place of love and respect, and their grand and eminent climaxes are coupled with calm, soothing peace that shows the two sides of parental love.

The personal touches extend to more than just dedications and inspiration, however. In the recorded speech from the show, Scott expresses his desire to change the relationship between artist and audience, and I feel that is where Axiom really succeeds. I won’t lie to you, I can’t be bothered with a lot of high-level, experimental jazz, because as a non-musician, the complexities wash off of me easily. Likewise, I find myself bored when consuming whole albums of easy-going bands like GoGo Penguin or the latest Snarky Puppy, which are very safe and sometimes slightly droney. Axiom rather places itself as accessible to casual listeners of the last two bands mentioned, whilst also containing compositional intricacies that fans of Kamasi Washington and other more complex artists will enjoy. It is a complete package.

Christian Scott aTunde Adjuah – like bands such as Coast, Nérija, The Kraken Quartet, and Aberdeen – is reshaping the modern jazz landscape, certainly making it more accessible to non-musicians. As Scott says during his introduction, the work presented to us is trying to change the relationship, the dynamic between artist and listener. This is jazz that fits every occasion, every experience. For me, this is what music is supposed to be – the ideal complement to your day, the inspiration to get creative, to succeed. Axiom is this and more, a record you should certainly pick up and enjoy.