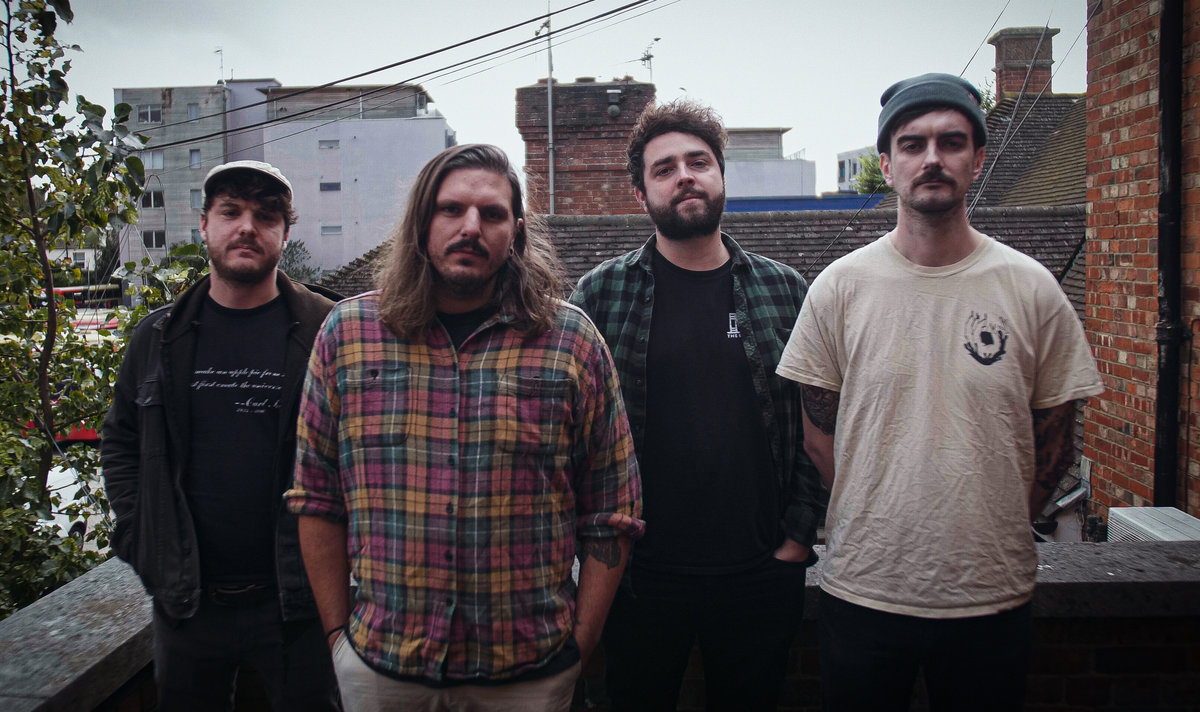 By Jake WaltersApril 1, 2022 No Comments

Introducing an album like Don’t Think About Death is a complicated proposition. I could begin by listing out the genres that it calls upon, the skills of the band, the production, I could even make up a story to get things started. Another way would be to say that it’s an album-of-the-year contender that showcases a band that manages to get literally everything right on their debut LP. There’s no wrong way to go about this, really. Instead, though, I’d like to start with a feeling. A feeling that pervades the album and is ever-present throughout the 35 minutes that it sticks around. Even then, the feeling is a complex, layered set of emotions that range from nostalgic comfort to the joy of discovery, that things haven’t changed as much as I thought but somehow everything is new again. This is Chalk Hands in a nutshell.

Hailing from Brighton, this quartet have been in the scene in a pretty low-key capacity for just under five years with their mix of indie, math rock, and skramz. The mixture of these styles is in a pretty sweet spot in general but in the hands of less experienced or perceptive musicians, this could be too much to balance. If they became too infatuated with lilting math rock riffs the heavy moments may not play out as well or get lost in the emotional vocals and things could quickly lose their brightness. Thankfully, this is never (and I mean never) the case on Don’t Think About Death. Right from the start with “Fail, Grasp, Restore” the balance in technicality, passion, and songwriting are pushed and pulled into various capacities until they go from trading time in the foreground and join to forge a brand new sound altogether.

While their slogan may be ‘Loud sad songs’, “Teeth and Nails” feels like it leans more into the loud side of things and serves as the more pissed-off moment on the record while still maintaining the band’s ethos all the while. Something that is quite noteworthy here is that there is a variety of approaches both sonically and emotionally on the album but all are on the same spectrum of weight and effect. “February’s New Friend” has light moments that lessen the gravity of the normal fare here and at times feel more like a coalescence of post-rock and skramz in the early minutes and it effortless swells in intensity to be one of the most hard-hitting tracks and even settles into some nice grooves along the way. “A Velleity” is another example of just how well Chalk Hands understand dynamics and their understanding of placement. There’s some real geomancy going on here.

Each song in the tracklist lands emotionally in no small thanks to the vocals, as is often the case when skramz is at play. Along with the fevered emotion of the lead vocals, the entire band will often join in on gang vocals to balance the sadness with resolve. Instrumentally, this band isn’t lacking in any department. The drumming and drum production is sharp and apt for this album and the guitar tone, while nothing wildly original sits in the space of comfortable familiarity. This is again where Chalk Hands are more than the sum of their parts and use their instruments to build a safe but exciting foundation for the album. If there’s a way to put it more succinctly, I’d call the instrumentation the ‘exposed basement’ of Don’t Think About Death, as the album fully rests on this being sturdy and reliable, but it’s also visibly a star of the architecture all the same.

The final two tracks are both mostly instrumental with the penultimate track giving the album its title. Even this deep into the record, Chalk Hands are still thinking about how to keep things interesting and include horns to let you know that yes, you’re almost done with this thing but they’re still thinking about ways to keep you engaged and surprised. The instrumental closer is a brilliant addition and a great soundtrack to reflect and decompress from the songs that came before it.

So far this has been kind of a slow year for my musical intrigue. There have been great records, no doubt, but nothing has grabbed me by the lapels, stared me in the eyes, and convinced me to love it quite like Don’t Think About Death. I have no doubt that it will be one of the albums left standing when the year comes to a close. It’s also my opinion that this is a new classic and will stand far longer than a calendar year.