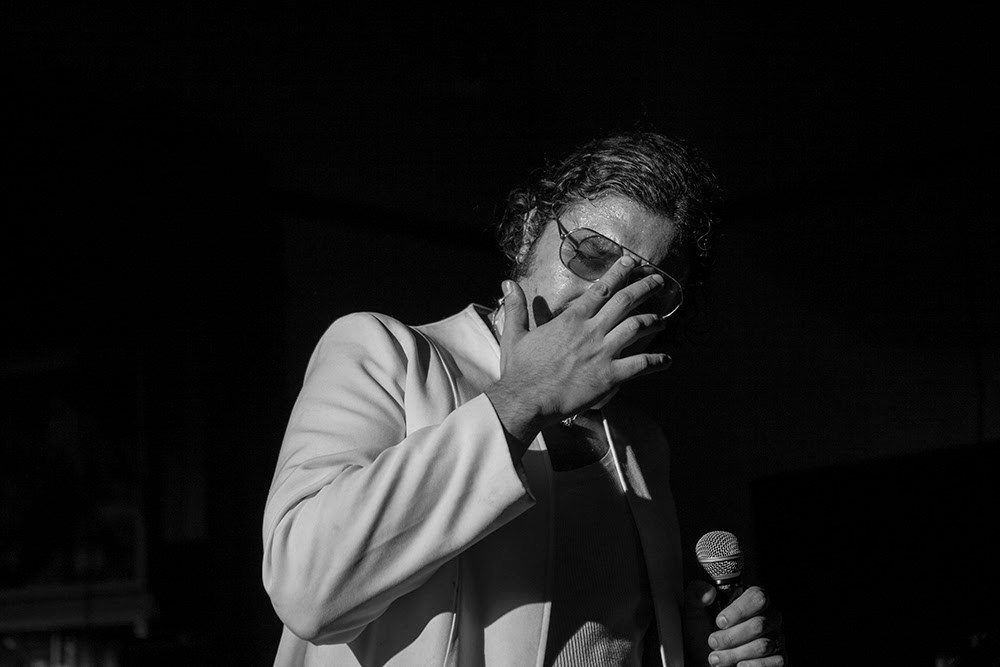 By Ashley JacobAugust 4, 2020 No Comments

Bernardino Femminielli pulls us deep into his disturbing, expressionist, and undeniably stylish world.

Usually, I’d have some fun gathering my own interpretations of an album like this. After all, I suspect any ears that stumble in the direction of L’Exil would be doing the same. In this instance however, I became curious enough to visit Bernardino Femminielli‘s Bandcamp site to find out what the backstory was behind the record, if indeed there was one.

Though the details of L’Exil‘s origins are a little sketchy, its narrative seems to help some way towards unlocking the tormented and demented sounds of Femminielli’s latest uncomfortable work of art. Its beginnings formed when this brooding expressive artist was arrested by border authorities during a US tour in 2018, which caused him and his wife to depart their debts and failing business in favour of a fresh start. By this historical description, it becomes apparent that Femminielli himself took on the mantle of ‘exile’.

From here, the album adopts a fictitious prose which depicts the ongoing failures of Bernardino’s career as a showman. L’Exil, in this manner, covers the ideals of success, or in this case, the stark lack of it. Failure becomes an overriding theme within its surreal four track span, and the despairing potency of this failure is notable. Straddling drum beats carry forth the sonic crooning of out of key synths. Warped sound effects jolt into the fray like snippets from a bad dream. The vocals natter incessantly over the music, relentless, and weaving their tale regardless of whether or not you can interpret the words… and that’s just the first track.

Following the inebriated moodiness of “French Exit”, the second track, “L’Amour Avec Moi”, steps in to add a more linear segment to the story, a glimmer of hope perhaps. Still, it retains its share of surreal flair, as it builds to a noise-laden jazzy climax. Any optimism this story might have is adequately shattered when the abstract tumbling down of “L’Exil” comes into fray, and the closing ballad of “La Ballade de Daddy & Johnny”, assures listeners that though the story comes to an end, it by no means leaves on a positive note.

It’s clear throughout the span of this record that Bernardino Femminielli is definitely good at one thing, and that’s making you feel exactly how he wants you to feel. Inside L’Exil‘s dreary cinematic soundscape, you can easily pluck out the feelings of frustration, lust, rage and despair. It’s all woven into a synth pop, jazzy, film noir prose, just to make sure your attention is given where it might not be otherwise invested. It’s captivating enough to be cool, and that’s a lot of boxes ticked for an album so far from the standard mould. It ain’t comfortable, but it is enthralling, and therefore has a great deal of worth.

Perhaps L’Exil could be considered a very elaborate audio book rather than a compilation of songs, but to nitpick too much at the format would be to miss the larger point. The more creepy and enigmatic this project gets, the more apparent it becomes that Bernardino Femminielli is an exceptional artist with a clear vision and a strong sense of honesty. Whilst many may have tried to use music to convey their feelings and fallen short, this man breaks down all reasoning and convention to create a damn-near perfect portrait of his horribly imperfect thought process. Listeners might balk at the overwhelming hellish negativity of it all, but those seeking a hearty spectacle of brooding storytelling will nestle contented in the dark world of L’Exil. The profoundly flawed side of your human psyche may even find it a touch relatable in parts.