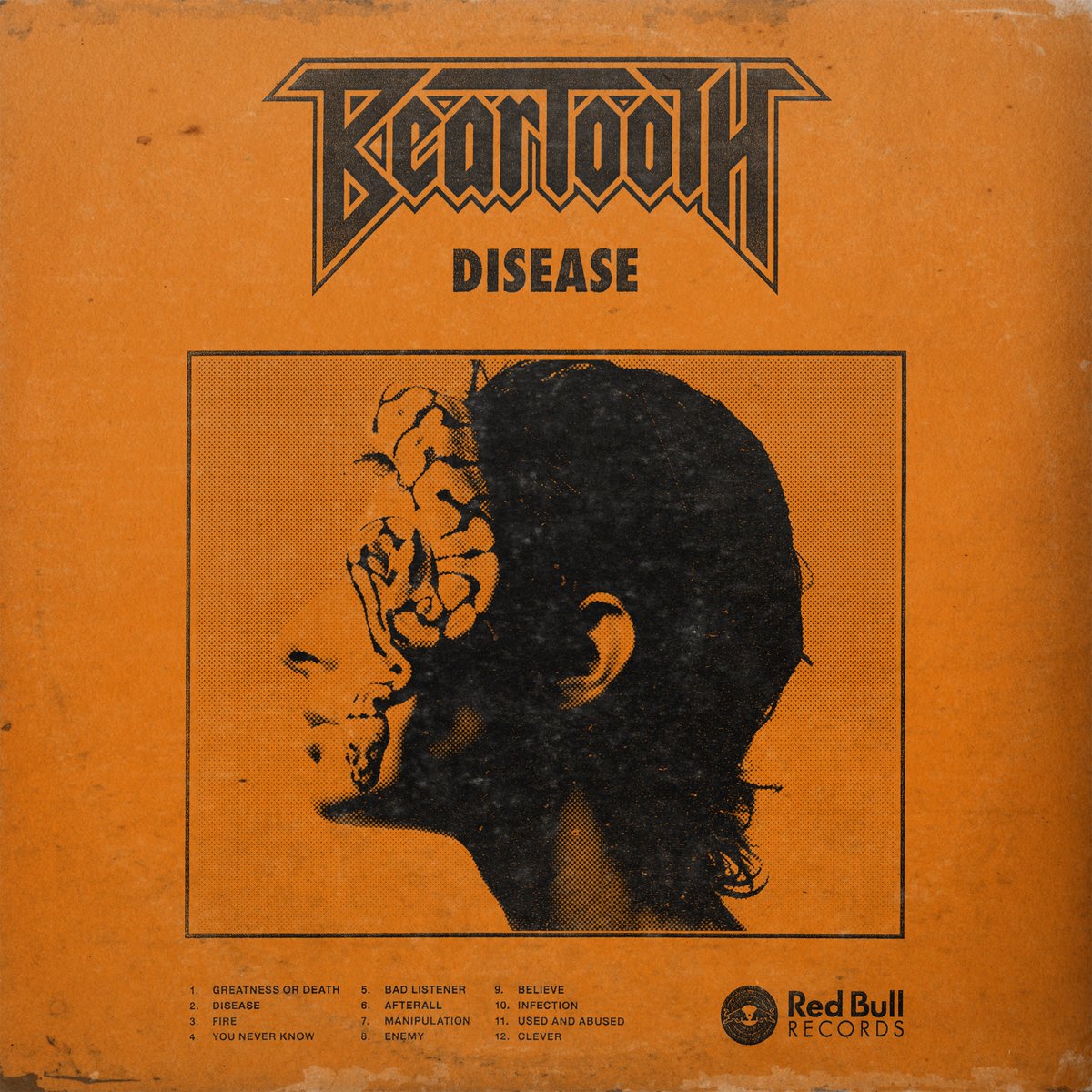 By Jake WaltersSeptember 27, 2018 No Comments

Disease is a record that accomplishes its mission with great success. While it may not set new benchmarks in redefining the genre, Beartooth embrace what makes them a unique and relatable act, with plenty of hooks to boot.

Beginning with 2013’s Sick EP, Beartooth have steadily risen from the underground to the mainstream with their brand of melodic hardcore. Led by Caleb Shomo, who often records every instrument on their albums, this act has gone from the Ohio hardcore scene to selling out shows on sizable tours. Even though their music does a good job of defying discrete classification by mixing rock, punk, and a dash of metal, the song structures have never really been the attraction to the band. The candid lyrics delivered with heartfelt passion have garnered Beartooth a loyal fanbase. For better or worse, Disease is a bit of a crossroads for the band.

Their first LP, Disgusting, is, in my opinion, one of the strongest debuts in recent memory. The follow-up, 2016’s Aggressive, lacked the same impact. While there were a few good songs, I was worried that the perhaps the magic was gone. After spending a lot of time with Disease I can happily say that the magic, for the most part, is still intact. “Greatness Or Death” opens the record with a mid-tempo acoustic moment, before descending into the sonic assault that was missing on the last album. The title of the song shows the band is aware that this could be a make or break moment for them. It’s a resolute statement that feels genuine and is catchy and heavy in all the right ways.

When listening through Disease, the mood cycles through anger, doubt, and triumph only to restart the cycle again. I certainly do not anticipate an album from Beartooth to be a concept record, it’s more a collection of thoughts and emotions. Perhaps this could be levied as a criticism about the album, but I tend to look at this in a different way. Caleb has been very open with his struggles through the lyrics of this songs and frankly, that is one of the chief attractions of the band to me. Identifying with the some of the same struggles, it’s easy for me to see this cycle of emotions as a natural progression. The title track dwells on despair, while songs like “Fire” are gearing up for a confrontation. How we feel is hardly ever steady, and this record reflects that throughout its intense mood shifts.

Of all the emotions represented by this style of music, angst is generally the most ubiquitous. Many, including myself, felt that the chip was conspicuously gone from the shoulder of Beartooth’s last outing. Well, I can assure you that it’s back in place on Disease. Perhaps the band’s most intense track to date, “Bad Listener” is a hardcore tour de force that will silence fans and critics that think they have gone soft. “Enemy” is another such track that rattles the rafters and then combines with it a catchy, melodic chorus. This structure works well for the most part and only becomes trite a time or two throughout the tracklisting. Beartooth have always enjoyed walking the tightrope between accessible catchiness and punchy aggression.

Disease is a record that does exactly what it sets out to do. Caleb and the band aren’t aspiring to redefine the genre(s) to which they belong. This is a set of songs that intends to exorcise demons, burn out some aggression, and let others know that their struggles aren’t theirs alone. The feelings expressed are genuine, the riffs memorable, and the choruses will stick with you for days. Beartooth are zeroing in on the space in which they have the most success, and I believe that this is their most confident step on that journey.