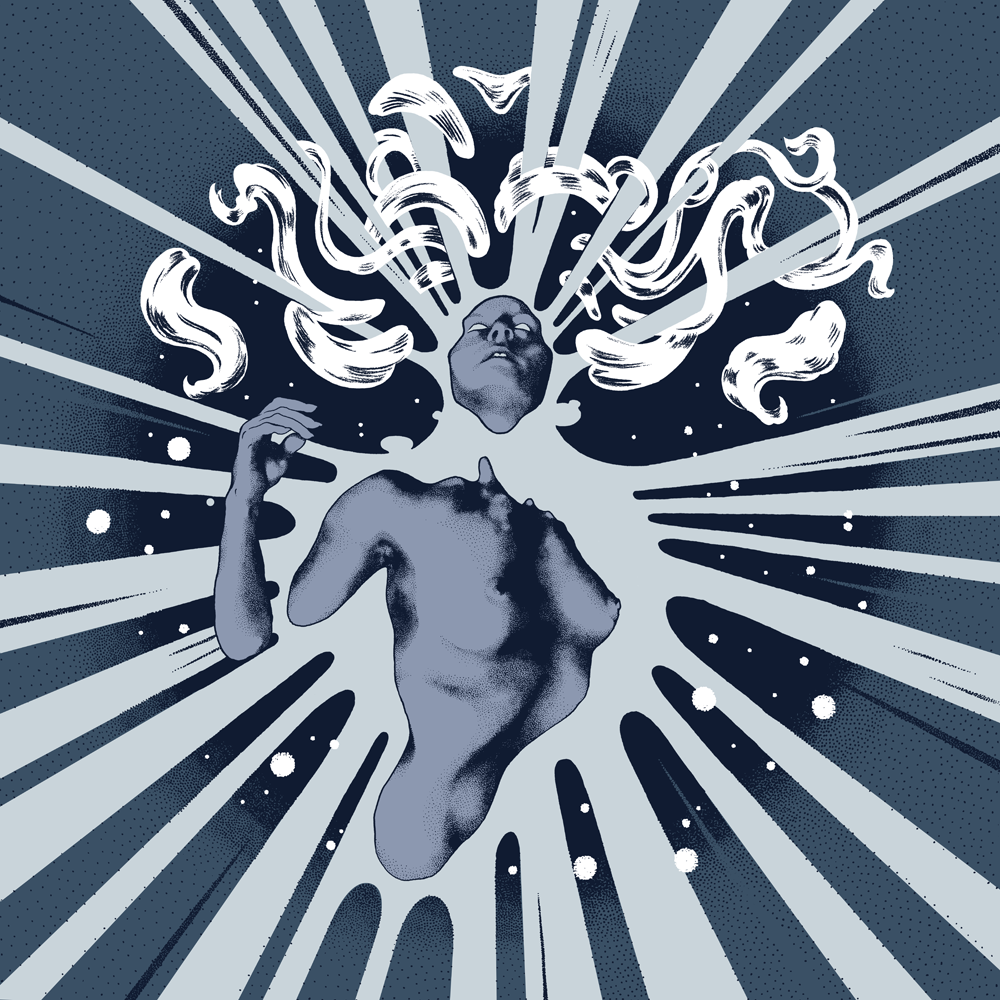 With Nanoångström, Bast rise above stereotypes in doom and infuse their sound with the echo of a dying star.

I’ve never been abducted by aliens, but listening to the new Bast album was probably pretty close to that experience. Although my abductors would likely be pretty confused why I would play music at such a moment, it would fit so well I wouldn’t be able to stop myself. Bast are for space rock what Primitive Man are for blackened noise: A band that takes the main concept and covers it in a thick layer of doom. Their new album Nanoångström is a monolith of reality bending blackened doom, pushing their sound even further towards the inescapable pull of a black hole.

First, we are off to “Distant Suns” with the intro track. Surprisingly starting with an acoustic riff, Bast are able to engage the listener in a soft embrace before starting their barrage of doom-ridden riffs and howling vocals. Soon enough, the acoustic riff is met with a clean guitar part, heavily modulated by phasers and an octave effect. Here we catch the first glimpse of the extraterrestrial theme spun throughout the record. At the end of the track, a tremolo-picked riff is introduced, solidifying the blackened element into their songwriting.

While not exactly complex or too exciting, the intro track is a nice little taste of all the different flavors the band are presenting to us, albeit in a lighter variant.

“Far Horizons” is the first full-length track, and it is colossal. Clocking in at around ten minutes, the band appears to have no time to joke around. A lo-fi, half-distorted chord progression builds the foundation, just to explode in the listener’s face in the next moment. The drums rumble and crash away, with the kick drum roaring with cavernous reverb. Bass and guitar are perfectly syncopated, and feel too heavy to even move the chords the way the band does. A droning atmosphere creeps into the scene through the constant repetition of the very first phrase. This goes on for a few minutes until the vocals kick in. From there on out, Bast seem to have awoken and don’t lose any time on any more monotonous, grinding riffs, leading us straight into a clean break. But just as the first chord progression in this song, this clean part is also a set-up for a tremolo picked, mid-tempo section showing more black metal than doom influences. A few more big droning chords, and the track is done.

After listening to “Far Horizons”, I felt a bit saturated, but still not quite full. I went on to the next track, called “The Beckoning Void”. While this song finally delivered more psychedelic, spacey doom, it also really shined in its cleaner moments that almost feel upbeat and weren’t just a set up for another brutal verse. This was the eerie, dark epic I dreamed of when seeing their name on our review list. Sadly, the next song played out pretty much exactly like this one…and the next one, too.

Nanoångström is a record many people who are into drawn-out blackened doom will like, and it’s by no means a bad record. The songs themselves are solid and do have their glorious moments, but monotony slowly suffocates the excitement to make it through to the end of the album, which is really sad because the last track is arguably the best one. I hope for Bast to continue their journey through space and time, but to learn from this experience and come out stronger in the future.