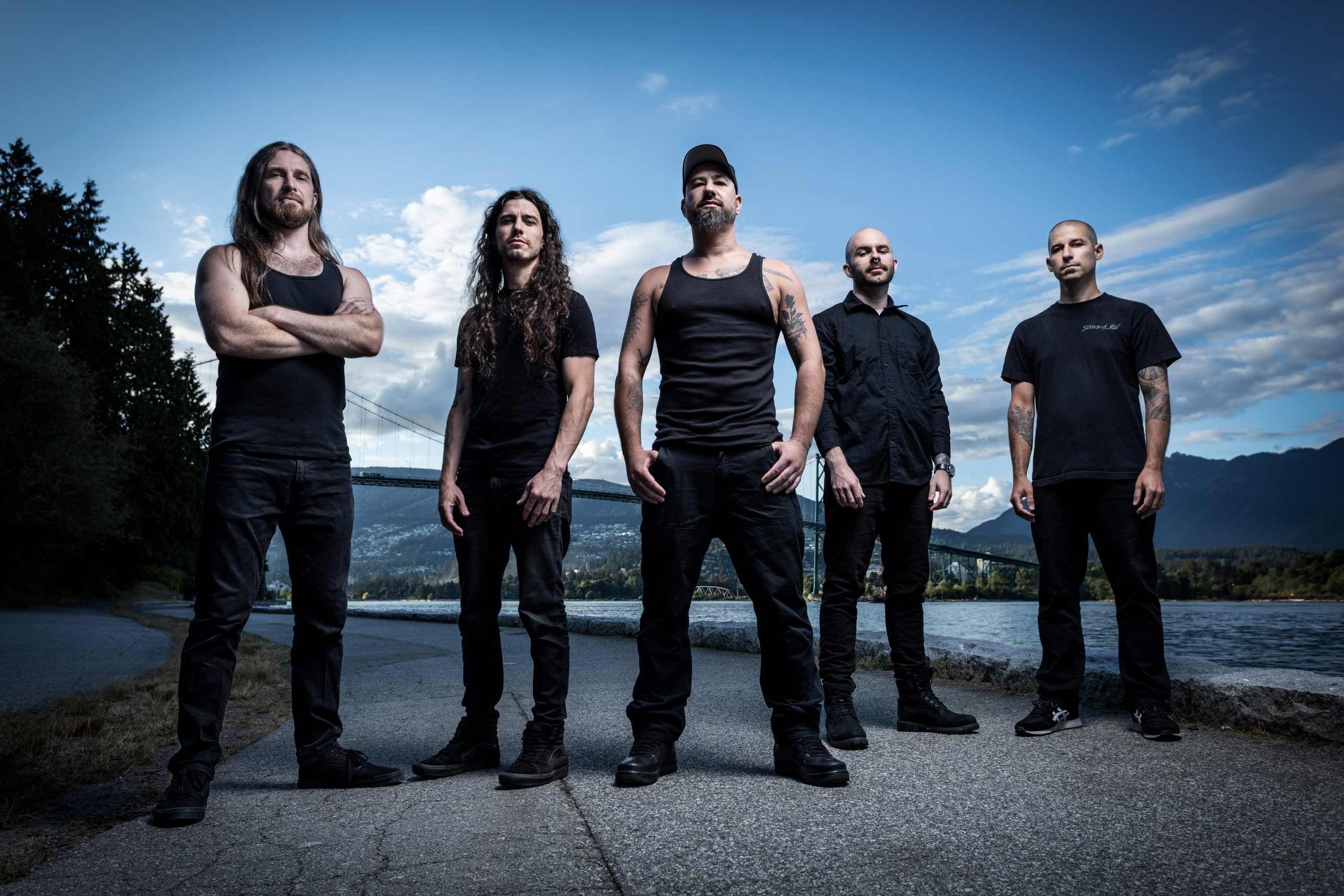 Bleed the Future is a masterclass in baffling prowess and acute hooks, showing how Archspire are determined to put the ooze to the moose and annihilate their listeners with staggering power and level of execution.

I recall getting my head blown off by the band around the release of their first/second album (debate later) The Lucid Collective in 2014, when I was going for a jog after the artwork caught my eye on some streaming platform. Fast forward thirty minutes, and I had randomly turned that jog into a full-fledged run as if I was trying to escape an unspeakable kind of evil on my heels. Beyond exhausted and on the verge of delirium, I had this conceit akin to ‘what the fuck was that?‘ ringing in my head, which I’m sure most of you are familiar with. I had never heard anything like that, and frankly, I haven’t heard anything like that since, with the exception of the band’s own earlier and later doings, of course. Following that one up with Relentless Mutation in 2017, it was throbbingly obvious that Archspire are one of a kind, and they continue to further cement that fact on their newest endeavour Bleed the Future, set to be released on the 29th of October via Season of Mist.

Extreme technical death metal is the name of the game, and in case it isn’t clear yet for some reason or the other, Archspire‘s brand is the very definition of extreme in that context. They’ve tightened every single musical screw possible to their absolute breaking point while somehow still managing to keep the machinery running and in a listenable shape. Bleed the Future is the kind of album you need to spend days, weeks, and even months with in order to really grasp everything that’s going on, and even then you can’t fully understand all of it. The band has tapped into a compositional source that’s filled to the brim with hooks, melodies, damn near-unprecedented technical prowess, and full-blown rampage transformed into an aural form, and while someone might expect that well to eventually run dry, Bleed the Future demonstrates that it hasn’t happened yet, nor will it happen anytime soon.

“Drone Corpse Aviator” swells in and wastes no time in unleashing the album’s sonic onslaught, as if the listener were to jump onto a machine already in motion. Or, well, it’s more like if you were standing right besides the railway tracks and grabbed the door handle once a train ran by, and just got swept the fuck out of existence altogether. You enter into some strange dimension inflated with constant strobes in vibrant colours and literal black matter manifesting itself through a steadfast sense of alluring dread. Archspire cuts in and deconstructs every single cell in your frame by sheer auditory violence during the first song alone, and you instantly know you’re in for one hell of a trek through the entire spectrum of mind, body, and soul. It’s equally thrilling as it is familiar, the band in question being one of the few acts that can just continue to beat the same old horse without turning stale, with absolutely no reason whatsoever to reinvent themselves. Are steps taken forward? Absolutely. Would it be in any way beneficial for the band to strive to do something different? Absolutely not.

After the barrage of gravity blasts and twisting and turning shapeless riffs of the first track, the second one, “Golden Mouth of Ruin”, showcases Archspire at their most tangible and, God have mercy, groovy form. Oliver Rae Aleron’s signature vocal style, most of the time resembling rap ran through a meat grinder, is a sight to behold, or listen to rather, acting as the cohesive element in keeping everything together as well as flavouring it in both blunt and somehow eloquent fashion, invigorating the momentum and keeping the listener on the edge of their seat at all times. It’s funny how time and time again, I notice myself running out of breath whenever listening to them, as my breathing precipitously turns shallow, coevally increasing my heart rate, making the listening experience both exhilarating and intoxicating, and I know I’m not alone with that.

In the context of the album, it’s clear why they chose to lead with “Golden Mouth of Ruin” as the first single, as it possesses exactly the kind of drive needed to pique anyone’s interest, advancing at a marginally more medium pace despite still featuring insane bursts of speed, and includes the kind of breakdown that just forces you to utterly destroy, like, some furniture or something. I’ve always admired the band’s ability to write gripping melodies that feel like a classical fever dream, that angle being one of the strongest individual aspects on Bleed the Future. The third song, “Abandon the Linear”, starts to properly push this facet to the forefront, with the titular track and the following one, “Drain of Incarnation”, being the best examples of why Archspire are as magnificent as they are.

The title track underlines their ability to utilize compositional dynamics in order to build moments of grandeur and glory into an otherwise steadily pummeling environment, while the lastly mentioned flourishes first through its atmospherical intro section, then in rhythmical excellence, and eventually in seemingly incessant melodic contrivances and solos. While I personally tend to detest guitar solos as a concept, this case is different, as it all comes together compositionally and actually makes sense in the bigger picture, instead of just being a pissing contest transpiring through frizzled hair, unclean appearance justified by egoistic stardom, and Stratocasters.

“Acrid Canon”, and by extension “Reverie of the Onyx”, brings out the big guns in terms of staggering precision in execution and a sense of cruelty that lingers on throughout the rest of the album. The last trio of songs are actually the very best the band has to offer, featuring some of the most aggressive riffage and atmospherically heavy sections Bleed the Future has embedded into it. “Reverie of the Onyx” in particular is one of the fastest track out of the bunch, but there’s still plenty of things to grab on to, and not once does it verge on the edge of becoming just unlistenable nonsense. Speaking of fast, the closing track “A.U.M” starts with a redonculous spoken sample and proceeds to explode into what is essentially the best individual song on the entirety of the album. It’s as if Archspire just took everything that’s good about their output and compressed it into a single track, producing a piece that not only stands out on Bleed the Future, but does so in the context of their entire discography. They just keep pushing and pushing, battering the listener’s eardrums to their absolute shattering point before coming to an abrupt end, once again leaving you looking like a human-sized question mark wondering what the hell just happened.

One interesting thing I made a note of already during my initial listen is how Bleed the Future shares some eerie resemblance with Archspire‘s debut All Shall Align. That particular effort is also the source of the debate I mentioned early on, since as per my studies, that one was initially released as a four track demo, and after the addition of few more tracks, it was re-released as an album (their first one), even though that fact seems to be swept under the rug for some reason by most. Either way, the mood on this new album is similar as on that one, which extends to the writing department as well, both having that unspoken additional substance to them that isn’t there to this extent on the other two full-lengths. There’s definitely a reason I wanted to bring this up, although it now seems to elude me. Just compare the two and you’ll probably understand what I mean.

Bleed the Future is an inexplicable album from an equally inexplicable band, offering you exactly what you anticipated, but also way more than that, being on a level completely of their own. There’s no humongous leaps to any direction really, but Archspire has still managed to refine themselves, which instantiates itself mostly through nuances and details. The amount of hooks is double that of the earlier albums, and I can easily see Bleed the Future as the band’s most complete and advanced release to date. I’m sure there’ll be plenty of you who agree with me after you’ve been able to batter yourself with the album for a while. Just like one of their moms said, that was a banger.