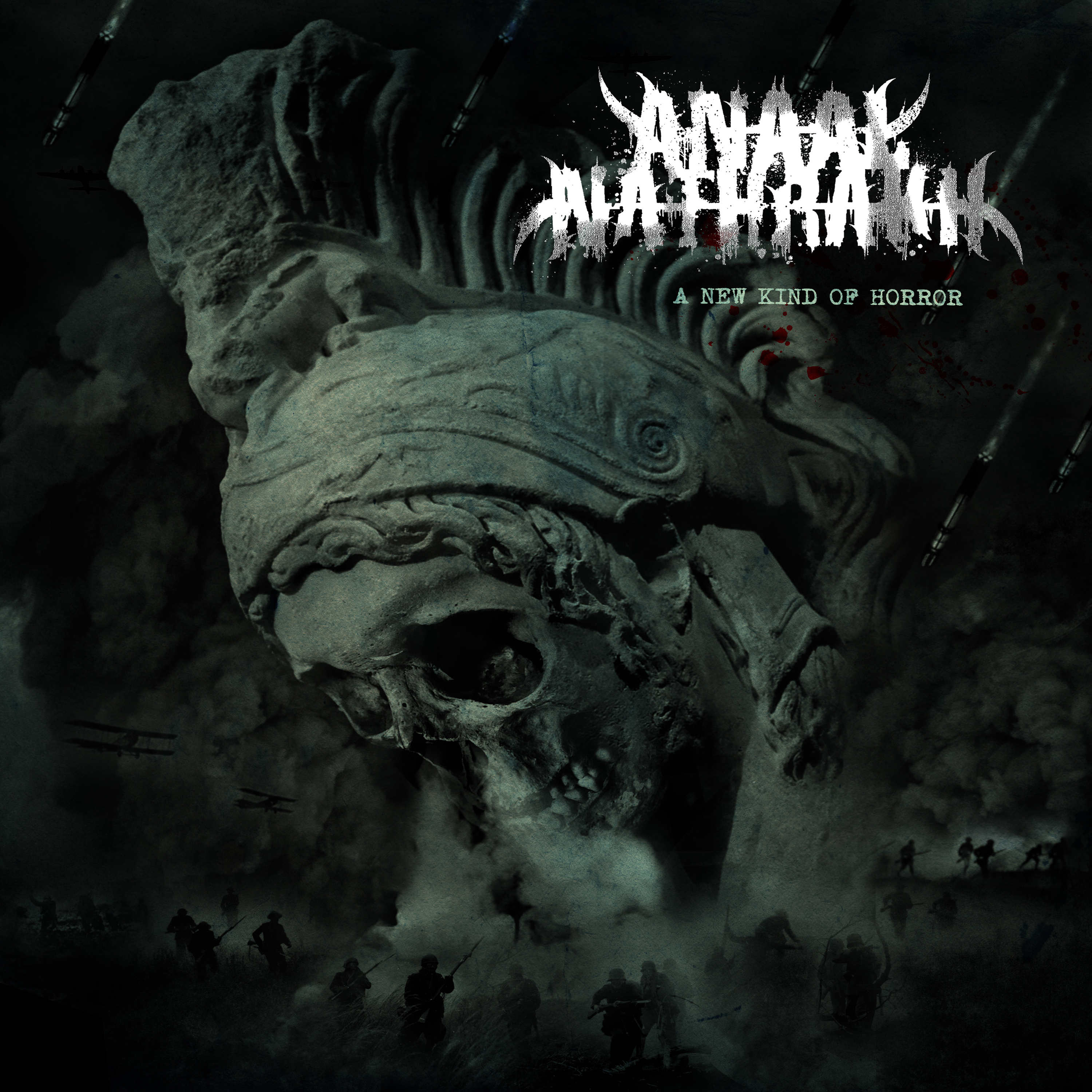 By David RodriguezSeptember 26, 2018 No Comments

Anaal Nathrakh create a hateful audio diorama of war and its atrocities with A New Kind of Horror by turning everything they’re known for up to eleven and breaking the knob off.

Fans of Anaal Nathrakh already know what they’re getting into here. Indulgent nihilism is the name of the game, all delivered through a fine blend of industrial, black, and death metal with a little grindcore grated on top. For the uninitiated, tread lightly; this is one of the most brutal releases you’ll hear all year, and what better way to tackle something like this than with a buddy! Me and fellow writer/editor Dominik plunge into the marching war machine of A New Kind of Horror and deliver our thoughts on it.

Anaal Nathrakh have long been the apex of atrocity for me, and it’s here with A New Kind of Horror that they capitalize on that more than ever. This new album actually releases on the 100-year anniversary since the end of World War I, and in basing their album around that war, the English extreme metal duo turned out one of their most harrowing efforts.

Lots of lyrical and thematic interpolations of famous poetry from the likes of D. H. Lawrence and Wilfred Owen inspire the lyrics along with the band’s own deviant originalities. This borrowed poetry is the only nicety afforded to a listener, as songs like “Mother of Satan” are relegated to mindless chanting of ‘Satan‘ over and over to both parodically comment on black metal itself and make a reference to TATP explosives, also called ‘Mother of Satan’. Although we truly do run the gamut of lyrical density here, it’s all delivered in the same hellish manner: loudly and roughly.

This is a band that’s known for going well over the top. The eccentricities take no break here. “New Bethlehem/Mass Death Futures” lines their violent metal sound with pretty synths, choral chanting, and falsetto vocal leads. The vocals have some of the widest range on any extreme metal outing I can think of from deep, distorted gutterals to those disheveled Dickinson highs fans like me enjoy so much. What’s more, we close out with the hell opera of “Are We Fit For Glory Yet? (The War To End Nothing)” with a very theatrical chorus of layered boisterous baritones. Although the end of a terror should be seen as a reprieve and a restoration of normalcy, if not peace, it’s just as horrid as it started despite its clean dressing. Anaal Nathrakh do best when they are relentless though.

Single “Forward!” sees the hopes of millions of soldiers making it back home alive from the war before Christmas shatter under the jarring machine gun sampling and very distinct, shrill sound of a rifle clip depleting and ejecting in the chorus over catchy, rapid-fire riffing. Truly, one of the greatest horrors of all is how expendable people are treated in times of war: ‘Forget your fear, the guns at your back scream/Forward!/Who gives a fuck if your enemy’s starving?’. It’s not hard to make out images of entrenched men going ‘up and over‘ charging toward the enemy in hopes of routing them before they, too, die.

Perhaps ironically, these songs are so energetic and fierce, it’s like they are pumping you up for war. Make no mistake: the music never sympathizes with the idea of war or its bringers, and seeks to show you every possible atrocity associated with it. Either way, this album has the subtlety of a panzer unit rolling down your street and I wouldn’t have it any other way. The band even made this their shortest album ever which makes everything fit better in a more concise package, bloodied and brutalized as it may be.

Anaal Nathakh have crafted a truly deplorable, unfeeling hate machine with grinding gears, pulverizing apathy, and nihility that comes with the concept of war. Surgically savage and unrelenting, this is perhaps the duo’s most precise work yet. Much like The Great War this album is based on, we see a new level of aggression and terror here made palatable with their patented catchiness and raw sound. If you like it heavy, you need not look elsewhere for satisfaction.

You know, I’m into more mellow styles of music these days for the most part, but even I need a hearty dose of pure, unmitigated disgusting filth every now and then. Good thing, then, that Anaal Nathrakh have a new album coming out! These two British gentlemen have been prime purveyors of ridiculously chaotic, over-the-top fodder for lovers of excessively brutal music for almost two decades by now, and there are next to no signs of them slowing down production anytime soon. Their unique brand of grindcore-infused industrial black/death metal has lost none of its potency over time, au contraire; if anything, it has taken an even more terrifying and fascinating shape on A New Kind of Horror.

You might be forgiven for thinking that the band’s music is a bit of overkill. To which I say, well, duh. Of course it’s overkill – that’s the fucking point! Anaal Nathrakh’s music is like an atom bomb covered in chainsaws, tied to a baseball bat and delivered straight into your face. It’s an exercise in how to construct a consistently challenging, abrasive listening experience out of the mechanical deconstruction and reassembly of ultimately contradictory elements without betraying as much as a speck of subtlety or pretension. This is boundary-pushing musical subversion at its finest.

Leave it to the music to speak for itself – loud and clear. “The Reek of Fear” (hey, that rhymed!) couples flickering industrial electronics, blast beats, and shrieking guitars with Dave Hunt’s contorted vocals during the verses, giving off an aura of menacing artificiality. A few brief moments of effect-free screaming and a whispered sentence later comes the song’s hook, and…wait a second, is that King Diamond? The piercing, crystalline falsetto does sound eerily reminiscent of the Danish icon, and for being a more archaic take on metal singing, it works surprisingly well within the context of Anaal Nathrakh’s modern vision of auditory repugnance.

‘It will all be over by Christmas’, proclaims the following “Forward!”, referring to the popular belief in 1914’s Britain that the oncoming war will be dealt with swiftly. I think we all know how that went. This song has an especially powerful command over the listener, pushing them into a violent frenzy with forceful screams of ‘Forward!’ in its rousing chorus. I have no doubt that it will go down well with live audiences. “Vi Coactus” begins with a riff that hearkens back to “Forging Towards The Sunset”, but takes a slightly different turn that that black metal behemoth of yore in forgoing the epic chorus and instead relying on grandiose choir vocals and a shocking sample about human experiments to get its message across.

Add to the above that Dave Hunt dishes out some heavy shit in the lyrics, like his reflections on the horrors of World War I or the current complacency of modern civilisation in the face of rising fascism and xenophobia around the globe, and you’ve got yourself an album teeming with musical and verbal heft. Just like some species of sharks need to keep swimming to survive, Anaal Nathrakh, the most aggressive predator of the metal seas, never cease to up the ante with each successive release to ensure their position at the forefront of the genre. On A New Kind of Horror, this is achieved by dialing all their familiar tropes up to eleven: the blackened grindcore onslaughts are even more devastating, the clean-sung choruses more theatrical, and the industrial elements more jarring than ever before.