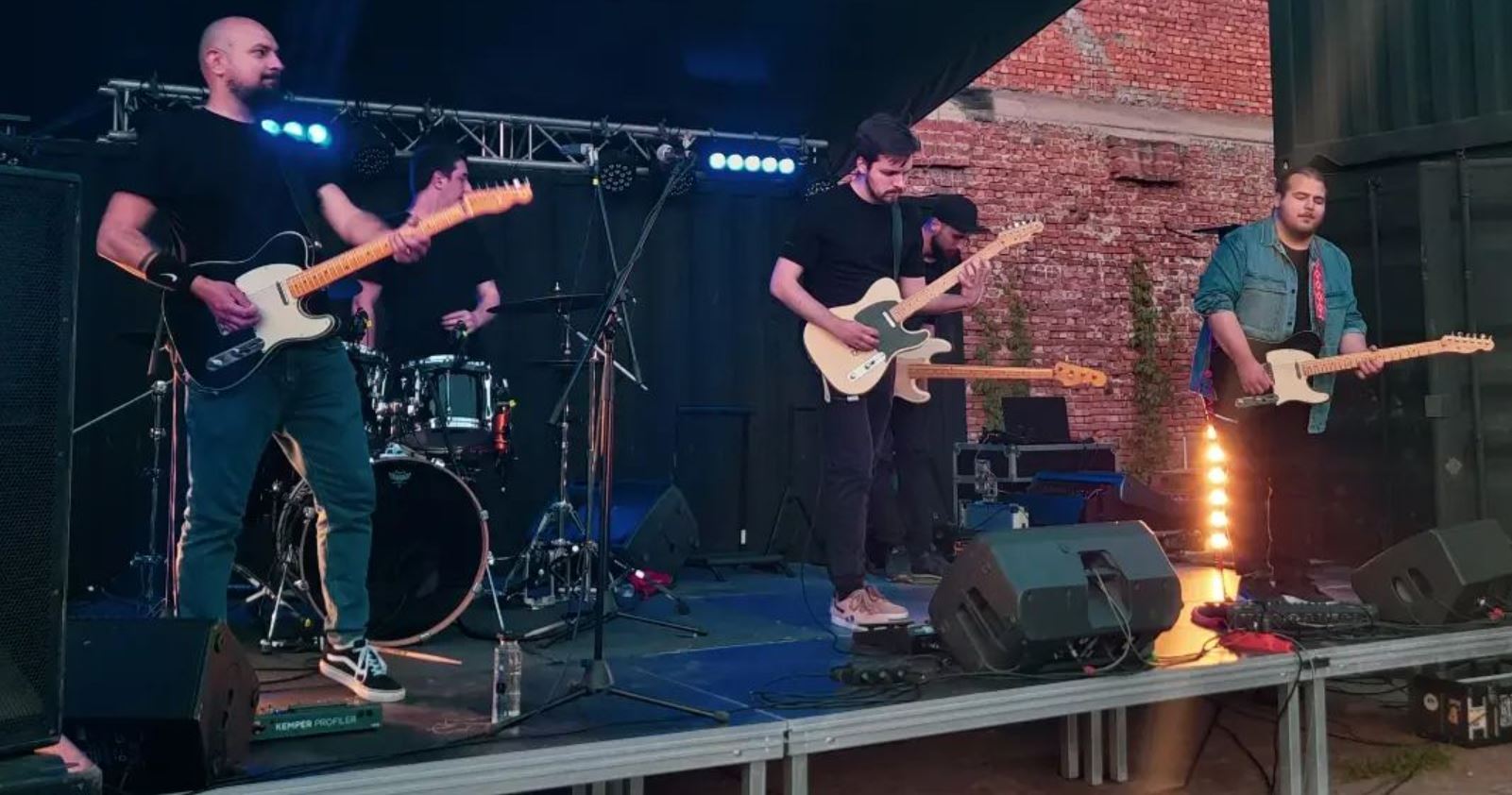 By Robert MiklosJune 9, 2022 No Comments

Romania isn’t exactly a hotbed of amazing music, but with bands like Am Fost La Munte Și Mi-a Plăcut kicking around, it has the potential to become exactly that.

I very, very rarely have the opportunity to talk about bands from my home country. Naturally, my hype meter went into overdrive when I saw there was a sweet Romanian post-rock record to review, and said hype meter broke entirely when I realized I could see the band in concert and effectively hear parts of the record I’m reviewing live. That’s an absolute first and I’m very happy to have such circumstances surround such a first. Fellow writer and EIN editor Shaun Milligan spoke highly about Am Fost La Munte Și Mi-a Plăcut‘s previous record, La Deal, prompting me ahead of time to keep an eye out for the band.

The band’s rather tongue-in-cheek appearance and presentation is fully transparent through their album and song titles, even in the very origin of the band, although their music is belied by this aspect — standing in a stark contrast. It’s the kind of humorous demeanor that feels borrowed from stoner bands, but applied very differently. I like that — a lot. It subverts expectations without being crass or cliché. It’s also a matter of how this ludic nuance kind of reverberates in the tunes, giving them a light-hearted feel while also underlining in the back of our heads the memo that we shouldn’t take stuff too seriously.

La Vale is an apt successor to La Deal, in all aspects. While the temptation is too real, I won’t delve into an exhausting side-by-side dissection. You’ll just have to take my word for it, or do it yourself. I have a different point to make today. It’s about the impact of the music itself, since on a technical level there isn’t anything truly revealing. Revealing in the sense that knowing what went into that end won’t change the emotional stir-ups and how they manifest.

I managed to listen to La Vale a couple of times before witnessing it live. Then came the day of the gig. I prepared myself as the band was ready to get on stage. The music started before they even got up. They played a solid 70-minute set with barely a few words to the audience in between, proceeding to finish the set with energetic applause from us while taking a bow. Am Fost La Munte Și Mi-a Plăcut offered us a consummate performance on stage, as far as the genre’s demand of a dynamic performance requests, at least. It’s obvious that they put a whole lot of heart into the material and it’s wholly uplifting to see that first-hand. Adding to this, the venue’s ample space and proper gear made the band sound tight, without leaving room for complaint.

Here’s the kicker though, at least for me: somewhere in the set, during one of the songs, I started feeling. You know what I mean, when you slowly start to realize that your stream of consciousness at an emotional level is lighting up and starting to bubble. I didn’t know where this was going, but then they proceeded to play La Vale‘s opening track, “Ne Cerem Scuze Pentru Disconfortul Creat” (“We Apologize For Any Inconveniences Caused”), during which I started losing focus on my thoughts, diving further into whatever sparkling vortex was growing inside. As the song progressed, I effectively zoned out entirely on a physical level. I was sitting idly in a lawn chair, staring through the band — eyes entirely glazed — staring through the stage too, into an eternity of sound where I was engulfed by a sense of longing from another world, as well as a sense of communion, equally otherworldly.

I don’t know what that is, but I managed to relive it, listening to the music again, back at home. It’s a warm, distant, and oddly satisfying feeling. To connect with something as fleeting as a gust of wind and to pine for something you didn’t know existed is truly magical in its own way. At different degrees, this nuance permeates the entirety of the record. This ties in seamlessly with the dynamic, as the wistful passages — intertwining with the softer ones and then with the hard hitting ones — meld into a kaleidoscopic stream which is as balanced as it is poignant.

What’s striking is how it’s not immediately obvious what gives it all this charm. At a glance, it might fool some into thinking it’s just another post-rock record. That really couldn’t be further from the truth. There’s something ultimately fresh and modern, which builds on established tropes with such a subtle twist that it’s simply impossible for me to honestly liken the band’s sound to any other particular band. The structure of the songs is definitely the dead giveaway as to what is really being done differently. The things which you would instinctively say are build-ups for climaxes end up being the climax, or something else entirely. Soft and quiet bits might just be the natural downwards inflection of a moment instead of the opening to a thread.

It’s also very satisfying to see that Am Fost La Munte Și Mi-a Plăcut decide to place an equal emphasis on groove, as much as texture and/or melody. Bands in the genre always tend to gravitate almost entirely into one or two of those things. I think it’s a very nice touch and I can see this becoming a trademark of their sound. Of course, the organic and clear production value, coupled with the crisp yet warm tones of the instruments is the cherry on top of this sonic cake. At the same time though, it’s an integral part of the reason for which everything hits the way it does. I don’t think it could work any other way.

There are obviously a bunch of other things which I didn’t and won’t be able to delve into, but that also leaves plenty for you, the listener-to-be, to discover as well. Am Fost La Munte Și Mi-a Plăcut give us one of the finest post-rock records of this year and if you’re even marginally into this area of things, you’d be doing yourself a huge favor by digging into the contents of La Vale. Also, maybe give it a couple of goes before settling on your thoughts. It took a while longer than usual, but La Vale really grew on me.