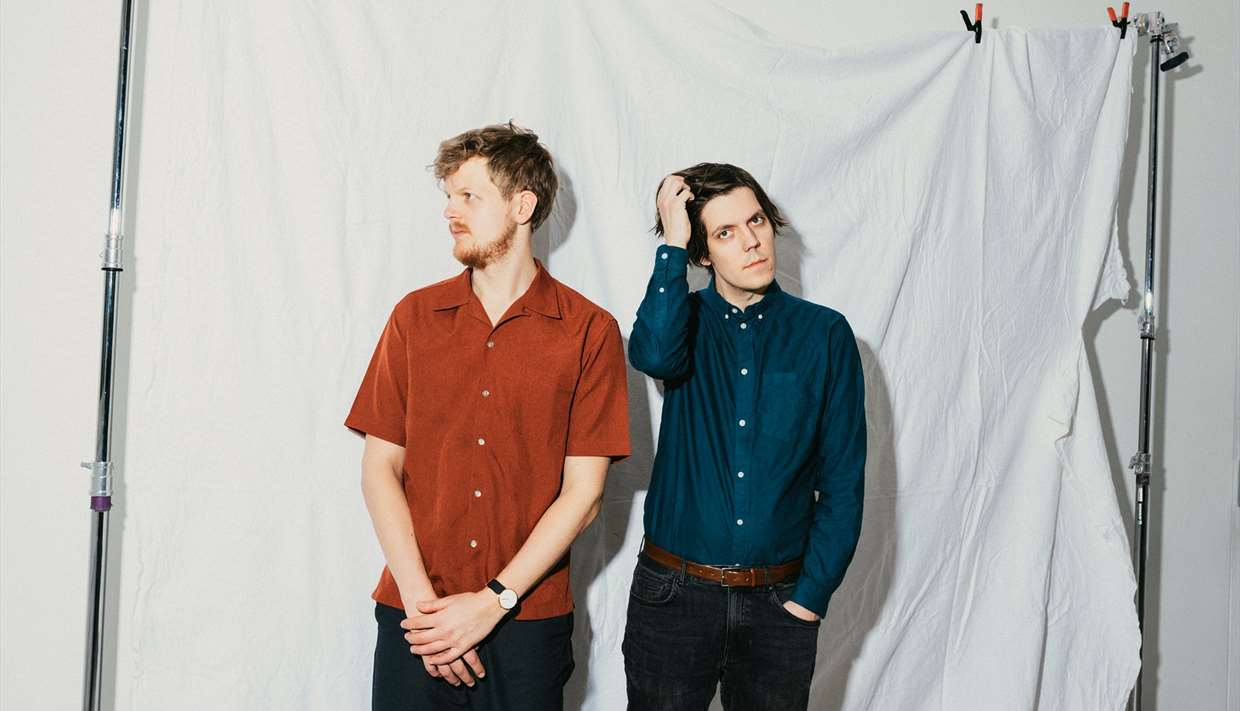 By David RodriguezJanuary 15, 2020 No Comments

Aiming for Enrike flex their synthetic side more than before, but never lose their eclectic and fun-loving humanity with Music for Working Out.

Aiming for Enrike is a charming little project that’s made a name for themselves with eclectic turns into math rock and some noisy and progressive affair. If you haven’t heard their last album Las Napalmas, I implore you to do so at your earliest convenience, but perhaps not before listening to their latest offering! After all, that’s why we’re here, right? Did you make a new year’s resolution for yourself to get into shape or lose weight for 2020? Did you… not do that and just want some awesome-ass music to play, while you drift like Initial D into the drive-thru lane of the nearest Popeyes establishment to get one or three of their coveted spicy chicken sandwiches? No matter what your predilection for health is, I think you’ll find something wondrous to like about Music for Working Out, so much that you may just hang a poster of the band in your gym locker to inspire you to greatness.

The Oslo duo has become something of an enigma by crafting a lot of work that splits the hairs of sound, practically putting rock music into a blender to chop up and reassemble at will. Endearingly noisy amps and effects were the glue that held it all together. It’s nothing I would call abrasive or challenging – more like prickly and tantalizing. Naturally, I expected this to continue on with their latest record and it does, though in a way I definitely didn’t expect.

Let’s just get this out of the way: this is an electronic album. I mean that both literally in terms of the genre it employs and in terms of it being electrifying. The latter isn’t quite as surprising – it’s expected, honestly – the former is. Aiming for Enrike have always dabbled with electronics, post-processing, and effects to imbue their sound with screechy timbre, wavy moans, or laser gun-esque staccato, to be equipped like a weightlifting glove on a hand. Just as those gloves improve your grip, the band’s use of these things creates a gripping and catchy approach that’s hard to get out of your head. Couple that with a more rhythm-based foundation, the likes of which are found across the entire electronic music spectrum, and you have an album you can loop more than a treadmill belt.

“Hard Dance Brainia” is a fine example of what I mean here. Listen to its gradual intro that starts comparatively minimalist, drip-feeding in some pulse-pounding drums and playful guitars to lead over the rhythmic ones. Before you know it, they’ve built up a sonic wiggler of a track befitting of a workout music playlist to keep the energy going. The textures here and in pretty much every other song engage you in ways that you don’t get in a lot of other hardline electronic music though. I do want to emphasize that – Aiming for Enrike haven’t lost, or even traded away, their magic. They’ve simply re-contextualized it, perhaps taking their album’s title of Music for Working Out more seriously than you would expect a band.

What I’m trying to get at is, of course, thematic execution. Music for Working Out is as much a theme as it is a name, and a fitting one at that. So many tracks here are ready to empower you, to have you digest and convert them to energy in order to get those reps in. Repetition is usually seen as a point of contention in music, but for certain types of the art, repetition is power. It teaches you the meaning of it, like having a phrase in a foreign language restated in order to grasp it. The more you listen, the more you pick up on. You hear the lilt in the effects-heavy guitars, you sense the curve of the bass notes giving a passage some funky twang. Much like the repetitive sets you can put in at the gym, the nature of the work is what yields results. You stick with it, and you’re fulfilled in a way you were looking forward do.

Now, it’s arguably easier to digest a music album for most people than it is to shed a few pounds at the gym, so I don’t mean to totally parallel the efforts of these things, but making an album may be a different story. It’s evident that Aiming for Enrike put a lot of blood, sweat, and likely tears into their work because even as they skirt their music into this newer direction that’s more accessible, they’ve made it a point to not lose themselves.

When I listen to songs like “Diving Within” with its synthetic and repetitive beat that twinkles in the air like the sun’s light penetrating below the surface of water, I think of how many hours went making the song sound just like this. The bouncy, fun melodies of “Undead Horse of Thunder and Metal” entice me, bringing forth the thought, ‘I wonder how long it took to come up with this great riff’. This is a music fan’s album, rife for digging into to find little treats below the surface of rhythm and melody to appreciate and share. Even skating on the surface with its lively, often explosive, always intriguing approach to rock and electronica, it’s worth its weight in dumbbells.

Will this music make you bench press 380 pounds? Can you run a five-minute mile while listening to it? I’m sure for ethical and legal purposes, Aiming for Enrike can’t and won’t say this album will improve your exercising experience, but since I’m only marginally bound by ethics and law, I’ll do it one further in saying that Music for Working Out can enhance nearly any experience! Whether you’re chasing chicken or gains, this is music that you can vibe with in just about any given scenario. The duo successfully changed lanes while staying true to their established sound, packing more nuance into their music than a protein shake has nutrients. Sure glad I made my resolution to listen to great music in 2020.