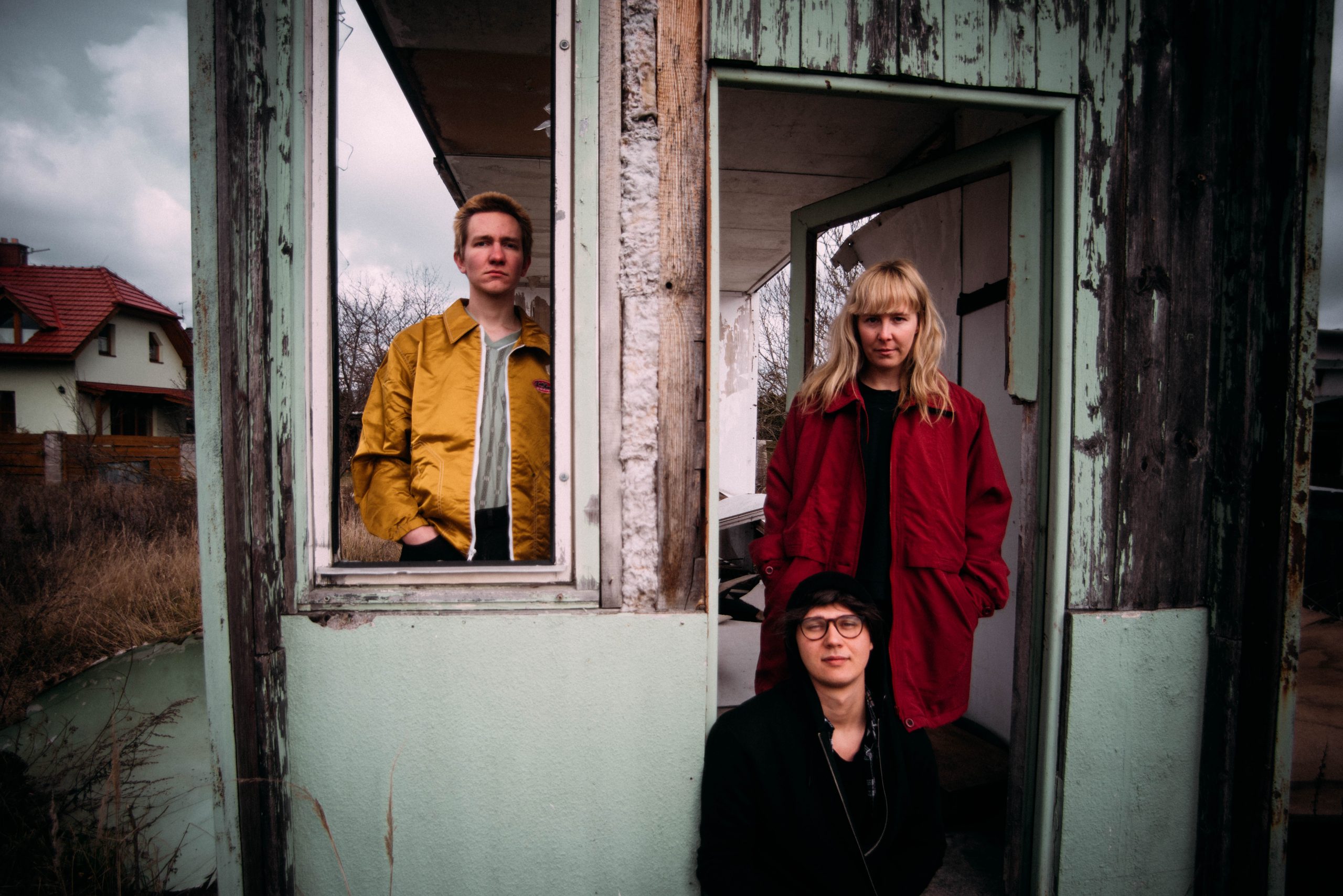 Czech post-punk trio sinks are an interesting bunch. Consisting of singer/guitarist Antonín Mika, bassist Vendula Pukyšová, and drummer Peter Štímel, their music is moody, unnerving, and full of attitude – exactly how I like it. Today, Everything Is Noise is pleased to premiere the video for their song “Lex?urin”, from their July EP, which releases today via CRAZYSANE RECORDS.

If you’re familiar with sinks’ earlier releases, July might come as a bit of a shock to you. Where releases like 0 and June are noisy, but live-sounding, July is heavily electronic, reflecting the state of isolation many of us have been subjected to in this first half of 2020. It’s a reinterpretation of the guitar-driven songs of June, offering a fresh perspective on these. About July, the band says:

‘A larger release is being worked on constantly, but during the peak of uncertainty and the strict lockdown, a bit of mind occupation seemed necessary. Antonín’s eight stem Ableton demo put down the necessary basis over a bunch of sleepless, drunk nights of being locked in the house, Vendula added the bass and the mix and master was done by the ever so amazing Nichi Mlebom. The point was to put a new spin on the old songs without taking the mood away. Now that it’s out, it’s up to everyone to decide and hope that we all see each other face to face at a gig soon, so that the original versions can be played live again.’

If you’re after something to cheer you up, turn away now, unless you find yourself uplifted by noisy, dark music. July sounds a little bit like Massive Attack, but the comparison seems kind of pale because on July, sinks are so much more than a band of Massive Attack imitators. Their songs are both simpler and infinitely more complicated, both darker and more soothing.

At the centre of July is “Lex?urin”, the feature of this premiere. It’s a simple, yet restless song, fizzing in the ears like popping candy, or lemonade. Its psychedelic music video – shots of trees and a dog in the back of a car, overlapping and colours distorted into stark vividness – is bare enough not to distract from the song’s fragility, while bringing just the right amount of intensity. Its straightforward imagery mirrors the stripped-back nature of the music, the twisted colours its unnerving qualities. Part of me feels comforted, in the way that certain drugs can be comforting; the other part feels paranoid, in the way those same drugs can make you paranoid. It’s an odd contradiction, yet one that makes perfect sense.

The whole EP is like this – intense, but not overbearing; each element uncomplicated, but executed with finesse; creating something very disturbing. All the samples used are simple, and often there no more than four or five layers of sound, yet the atmosphere created is very specific, and very cool. It creates a world where only husks of things exist, nothing is quite whole or complete. An intense feeling of loneliness shrouds July. Perhaps in succumbing to it, we will become marginally less lonely.

If you like what you heard, head over to Bandcamp to hear these songs in their original form, and smash that ‘Like’ button on sinks‘s Facebook page.