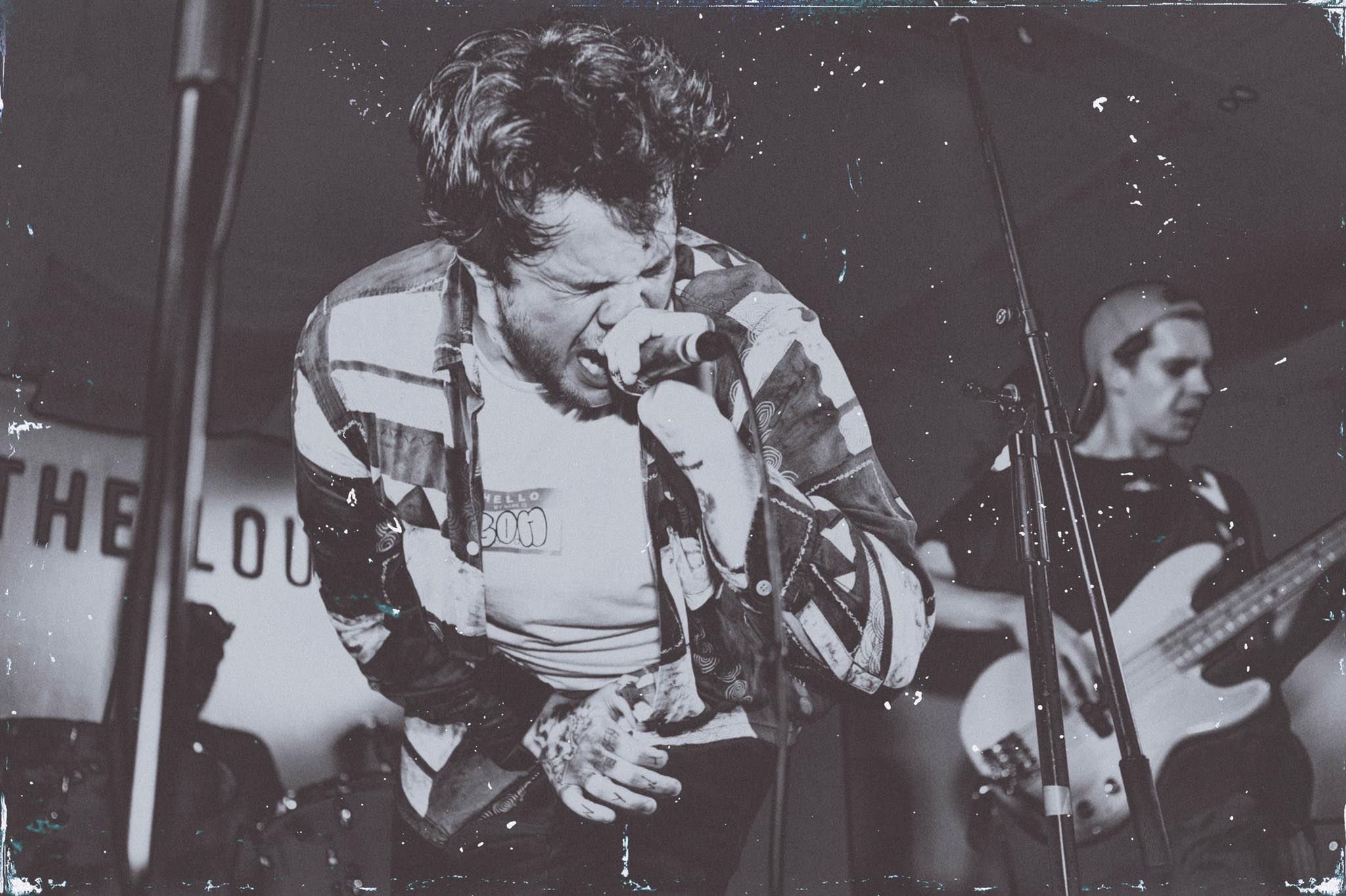 By Dominik BöhmerNovember 13, 2018 No Comments

You might remember today’s interviewee Sam Lawson from the interview we did about his project The Yu-Yi Band back in August. Well, I recently had the chance to pick his brain once again, this time about a band of his whose music a bit more straightforward in nature. I’m talking, of course, about Knave, the post-hardcore five-piece he fronts. We talked about their 2017 début EP, the inspirations behind their music, and the general plans he and his bandmates have for the outfit in the future, among other assorted topics.

Everything Is Noise: How would you describe Knave to someone who has never heard of you guys?

Sam Lawson: A bunch of Neil Young fanatics with access to distortion pedals? I don’t know, good question! A friend once said our live shows were ‘like being grabbed by either side of the face and forced to remember all of the worst things that ever happened to you’, I liked that.

EIN: Your début EP Songs for Quiet Consideration was released last year. Tell me a bit about the recording process.

SL: Well, we recorded at the college that Max (guitar) had attended, recording at colleges and whatever isn’t what I’d usually opt for, but it ended up working in our favour. It lends itself to the naive tone of that album, which we like a lot in retrospect. We demoed all of the material in our own time and then took it in there and recorded it, luckily they had the piano in-house which allowed us to add some more layers and textures to the songs. All the lead vocals were mostly recorded in the dark, so that I didn’t have to be concerned with how I was moving or appearing whilst getting the takes; we wanted them to be really intense takes. Our friends James and Karum from Hypophora as well as one of my oldest buddies Finn Jensen helped record the rhythm section parts

EIN: Aside from the music, I really like that EP’s cover artwork. Who did that?

SL: Hazel Boxall, she’s an artist from around where I live. She’s done some other designs for me as well in The Yu-Yi Band that we used to promote a single recently. She’s great, her Instagram is @pfg7000. We’re not gonna be using that sort of style of art any more for our covers or designs, she did it better than we could have asked for so, we’re gonna do some other stuff.

EIN: What inspired you initially to play this kind of music?

SL: I think I was in a rut generally, at that time For The Oracle was just becoming a huge chore to be in, something like twelve members from all over the country writing one song per 6 months. I just really wanted to be in a band like Alexisonfire or Thursday, I was getting really obsessed with emo music too, Midwest and even revival stuff. Plus the things that were happening to me in my life at that time wouldn’t have made for good FTO lyrics.

EIN: The way I perceive it, Knave’s music is a bit more straightforward than the other bands you have participated in over the past few years. What is it about this style that makes it worthwhile for you as a vocalist? Is it a challenge to adjust to this kind of music after doing more experimental stuff?

SL: Definitely, there’s less in the way of convoluted song structure or instrumentation but I think it’s equally as cerebral as all my other ventures. Like we think about the harmony, melody, rhythms and so on just as much and obsess over the minor details like me and this particular group of musicians always have, I think. The first time Knave ever played a show, we had people singing along with us after only having released one single, that was something that FTO couldn’t achieve more than once or twice in our entire time as a band. Clearly the music just resonates with people more than my other stuff, I understand why and I am really happy about it.

EIN: How do you approach writing the lyrics for this project?

SL: It’s hard to say, I often get really excited and design whole track listings and lyric sheets before the first note has even been written and then when we get in the room and i’m presented with a track, the whole idea goes out the window and it comes down to this combination of improvisation and some pre-written material. I think I’m always trying to just understand situations in my personal life when I write lyrics, that’s all really. I just want to grasp something I’ve been through or caused so it becomes a song, that song gets sung hundreds of times over and over until it becomes clear.

That’s why we stopped playing the last track from the first record in our live sets, unless we’re playing a home show, because the words weren’t becoming any clearer and the situation was still a fucking mess. But to go back to the question directly, I just really enjoy taking things I’ve heard or read from other people, films, literature and so on and turning them into functional pieces of poetry, if I can, and try to do them some justice y’know? The lyrics for the new album are more frank and honest than the first record, that one dealt with anger, frustration and the frayed ends of adolescence but this one deals directly with mental deterioration, madness, and subsequent suicide.

EIN: You’ve been playing a couple of gigs this year, including one at Turbulence Festival earlier this year. How was the audience reaction so far?

SL: I mean this year and last year kind of went at a similar pace, I think a couple of gigs may be an understatement haha! We’ve been around the block this year but we still haven’t got to the north of the UK yet, which i’m gonna change as soon as I can, I love it there. Turbulence last year was my favourite show I’d ever played until Turbulence THIS year – total game changer. Whole crowds singing all the words to your songs and letting out their frustrations and sorrows alongside you, is undeniably the best feeling i’ve ever had. It lets me know it’s all worth something. We got to play a bunch of great shows this year with artists we really like and across some different festivals and events. We’ve got a couple more this year before album recording starts, one at Jacob’s Ladder in Falmouth on the 10th at a festival we are sub-headlining (I believe) and the next day on the 11th at MacMillan Festival in Bristol, alongside bands like Monuments, Feed The Rhino, and Bleed From Within.

EIN: What would your dream line-up for a tour look like?

SL: Man, that’s the toughest question haha. I guess we’d like to support the bands within our genre that we really look up to, like Basement, Citizen, Turnover, and Alexisonfire, etc. I’d consider my career complete if I could go out supporting like Touché Amoré, Pianos Become The Teeth or Foxing, someone like that. That’d be it for me; I’d never have to gig again.

EIN: You have a new release coming up, right? Can you tell me about the timeframe you are looking to release it in, and about the direction you took with it musically?

SL: Well we’re recording towards the end of January with Bob Cooper from Crooked Rain Studios, the guy’s a legendary producer that we have been hearing about and having recommended to us for well over a year. Turns out he was a Knave fan already which really took us by surprise, a total honour. Our friends in itoldyouiwouldeatyou and Americansignlanguage have both recorded there with him. In fact, we have Sean from ITYIWEY playing drums on this record, which we’re really excited about, he’s the man. I think we’ll start releasing singles and music videos by the end of February, there are three songs on the record out of the ten that are going on there that stand out to me as singles. Guess we hit the road hard and get ourselves a good PR agent, that old chestnut.

As for musical direction, we’re still trying to strike that balance between having something definitive in the sound but also pushing ourselves and finding influence in other styles we usually wouldn’t. We’ve got some songs on this record that are leaning more towards artists like Radiohead and The Cure but one track later, we’ve got the heaviest thing we’ve ever written that sounds like Turnstile or Beartooth, a kind of riffing and playing we just wouldn’t normally gravitate towards. There’s even influence creeping in from The Dillinger Escape Plan/Every Time I Die and so on, so we’re really mixing it up. Ultimately though, all that stuff that people liked about the first record like the big vocal harmonies, vulnerable lyrical content, melancholic and ambient guitar passages, and slightly more melodic and leading bass playing, is all on there still. We think people are gonna really like this one.

EIN: What would you like to accomplish with Knave?

SL: Like I said i’m not really too delusional about what I want with the band, I can’t speak for everyone else but the idea of headlining Glastonbury isn’t something that enters my mind ever. In order to write the kind of music we do, you have to sacrifice that sort of dream. I think if I could play at around 7pm at a festival like 2000 Trees or ArcTanGent to a pretty full tent of people, about a third of which know who we are and they know the words and the rest are just checking out what’s going on, that’d be enough for me. Personally, I just wanna make ONE record that, in 15 years time, kids like me sit in their bedroom with their friends around a record player arguing about it and saying ‘is it really that good though?‘.

I just wanna contribute to the whole if I can, make some music that is important to people. I think we’re doing that on a smaller scale right now, but I gotta have more than that. I find myself at these show seeing bands like Basement, Citizen or whoever and I just think, ‘yeah that’s enough for me, that’s all I could ever ask for‘. We’ll keep working til we get there.

Many thanks to Sam for bearing with my relentless inquisitiveness once again! You can find Knave on Facebook, and I suggest dropping them a like there if you’re looking for a fix of fresh, heartfelt post-hardcore. Their EP Songs for Quiet Consideration can be streamed on all major platforms, so you’ve got no excuse for not giving them a listen.