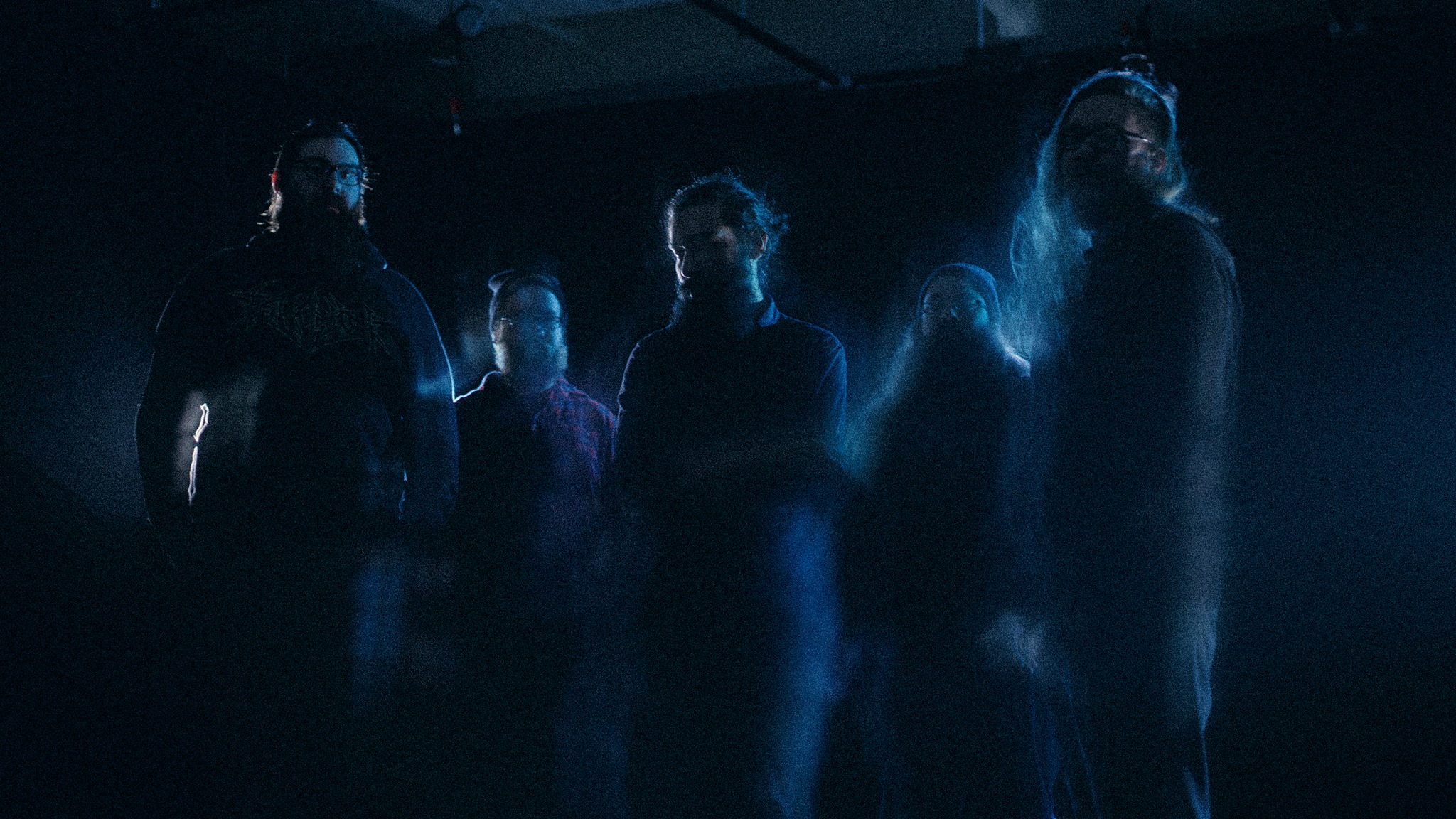 Music, Dreams, and Other Assorted Mysterious Things with Warforged

So, I’ll say this as simply as I can…I: Voice is breathtaking. Saying it un-simply is a lot more tricky. By the time I’ve formed one adequate descriptive sentence, an entire movement of the record has passed me by. The shreds have deafened, the melodies have whistled, the haunting nuances have slithered majestically across my synapses, and I’m still catching up. What did I even just hear?

I’m fairly sure you’ll have read a lot of positive reviews about this album by now, but it really is worth the hype. In 2014, Warforged created a small morsel of something titled Essence of The Land, then five years passed with just one singular release, and the world had almost been lulled into thinking the book was closed on this band. This year’s I: Voice was by no means an underplayed follow-up. Not only is the album an epic spectacle and a revolutionary display of progressive death metal, but an all-star cast of some of the finest talent in metal today. Yet, at the heart of it remains the distinct calling of a Chicago-based five-piece who really tapped in to the imaginative ghouls of their souls.

Is it any wonder then, that we needed to know more? Warforged vocalist and keyboardist Adrian Perez was kind enough to chat to Everything Is Noise about some of the creative processes and influences behind their music. Are we closer to discovering their secret to enchanted death metal wisdom? Not as such. But at least we scratched the surface.

Written mostly in chronological order, I: Voice consists of ten songs, each with their own personality but flowing together to create a consistent, hour-plus whole. Its mission statement was to also gather contributions from musicians from all over the metal spectrum, and further elaborate on the vibes and textures from 2014’s Essence of the Land. As Adrian explains, it was about creating something fun that their younger teenage versions would be stoked about, as well as being something worthy of conversation and debate. In terms of emotion, he assures us that what the listener draws from this album is totally up to them.

‘There’s been a lot of debate on the genre and sound, but everyone seems to agree that it is overall intensely emotional. Since this is a very personal record for me and I know what my intentions were when writing it, I get a lot of scary/sad vibes when I revisit songs. I’ve also listened to the songs 1,000,000 times, so I’m kind of desensitized.’

Those intentions don’t just lie in the music. Warforged inject a strong fictitious narrative into their content, which has run solidly from one record to the next. I: Voice depicts a collection of short stories and ideas, all centered around interwoven dreams. ‘It takes place during the early stages of the main character’s sleep cycle and flows as a stream of consciousness in its music, lyrics, and visuals’, Adrian tells us. ‘The title track is a musical representation of sleep paralysis, which I have experienced often since childhood.’

Fun fact: 2014’s Essence of The Land was a ghost story from a book read by the main character of I: Voice, hence the connection between the two records. Also worthy of note is their 2012 intro to the world, “The Hyperbolic Time Chamber”, and 2015’s single track “Two Demons”. And then, silence…a long, long, four-year silence. You can’t rush these things, after all! I: Voice has layers, lots of them, so a song isn’t done until it’s done, and then done some more.

‘I heard someone say once ‘art is never finished’ and I thought that was really cheesy/pretentious, but it’s kind of spot-on. Each song I imagined being a lot longer than it turned out, and there was a moment for each, when the outro was added, that was like: ‘Oh cool, this feels like a song now.’ Every single time I’d spend a couple days/weeks/months trying to add more sections to it and things just didn’t work out.

That’s the moment when I knew that at least the structure had reached its maximum potential. From then on it’s all sprinkles: harmonies, little vocal subtleties, effects, etc. Sprinkles are also challenging because the overall style of this record demands a good amount, but not too many. I believe “We’ve Been Here Before” and “Voice”, being the oldest songs, are the closest to maximum potential.’

Another essential sprinkle comes in the form of the wealth of collaborations on the record. The list is impressive, with the majority of guest-artists contributing to extra vocals and guitar parts, many of them from under The Artisan Era banner. I’ll cherry-pick a few names: Dan Gargiulo of Revocation, Stevie Boiser of Tethys, Kevin Hufnagel of Gorguts, Christian Münzner, formerly in Obscura…plus a great deal more. By the sounds of it, fun was had.

‘If I’m not mistaken, I believe each guitar solo/vocal part was taken on the first draft, if not the second (at least from what I was sent). I reached out to each of these people because they all have their own unique musical personalities and thankfully, they were able to understand the vibes and nail the parts without too much direction on my part.

On a lot of my favorite records, each song has its own personality or ‘part’ that makes that song what it is, and worth coming back to. This can be a solo, guest part, breakdown, ‘epic’ ending, the overall song structure, etc…I think the contributions we received do exactly that and I’m honored for the opportunity to have worked with these folks.’

Structure is a subjective component to I: Voice; the progressive interludes to the heavier sections are highly non-formulaic, and are all the more stronger for it. Take your pick from the thunderous pianos, elegant acoustic melodies, the occasional synth…and that’s not all. As you may have already gathered from the naturally occurring phenomena that is I: Voice, the seemingly sporadic arrangement is highly intuitive. Lyrics and vocal patterns were written last, and added only in the parts where they would elevate the song. As Adrian says, ‘If it felt like the song was on 10 too long – that’s the moment for a change up.’

The magic of I: Voice doesn’t just lie in the seamless blending of songs, but in the recurring trinkets that the more attentive listeners may pick up on. It is a style that Warforged have made sure to render unique to themselves.

‘Writing this way comes much easier to me than writing standalone songs. If I come across a cool riff or chord progression, I wanna milk it as much as I can and use it in different time signatures, tempos, and keys… Motifs and themes and whatnot.

This is something we explored with Essence of the Land, and upon realization how much opportunity for fun/cool ideas there was, it has become kind of the staple of the Warforged writing process. Someday when we put out tabs, people are gonna realize that this record is made up of like, two riffs, haha. Or, if your glass is half full, lots of Easter eggs.’

It all adds to the storytelling nature of Warforged‘s music. They create an entire world, drawing influence from numerous other sources beyond music. On the literary side of things, Adrian insists that children’s ghost stories have a stronger foundation than modern horror stories, by a mile: Scary Stories To Tell In The Dark, The Ghost Of Sifty Sifty Sam to name but two. The distinctive imagery, storytelling and sound design of filmmakers such as David Lynch and Paul Thomas Anderson also play an integral part to the band’s influential sphere. That’s before we get to fine-dining.

‘Uniqueness and depth like that is very inspirational for me. I like when you can tell there’s intent in art – pretentious or not. Restaurants Bar Tartine & Relae for similar reasons – you can see intent in their concepts. Like, when you are following any sort of ‘artist’ (musician, filmmaker, writer, etc) and you get to the point where you say ‘Oh, that’s such a Lynchian / PTA / Puglisi-esque thing to do.’ If you are a fan of their work, it’s the shit.’

So is there any way to make the immersive experience of I: Voice any more so? Well, there’s the obvious one: see the band live! In the upcoming seasons, Warforged will certainly not be strangers to the road, and fans get the opportunity to lose themselves in this enchanted low-end spectacle in person. Taking to the stage with this new material comes with some fresh new challenges for Warforged, however, among which will be translating the songs clearly and concisely for a live setting.

‘Since there are so many quieter passages, it’s about figuring out how to translate those parts in a way that they still have their effect, but they’re not so calm that you can hear dudes in the back of the venue at the bar talking. That’s always the challenge for us – finding that balance. When it works, it’s the shit. But when it doesn’t, it’s pretty brutal.‘

Time passes, records spin, listeners will (eventually) catch their breath. Its a given that Warforged set themselves up for future-classic status. But surely I: Voice isn’t just a one-off occurrence…right? So what next for this irrepressible outfit, and will we once again get the chance to traverse the semi-conscious dream-state of Warforged‘s imagination? Well, yes…kind of. As of yet, none of us know what lies ahead, but in terms of its content, Adrian provides us with one final, swift teaser of what it will be:

You can hear Warforged‘s growing compendium on their Spotify and Bandcamp pages, as well as see their videos on The Artisan Era‘s Youtube channel. For all other news and info visit the band’s Facebook page.