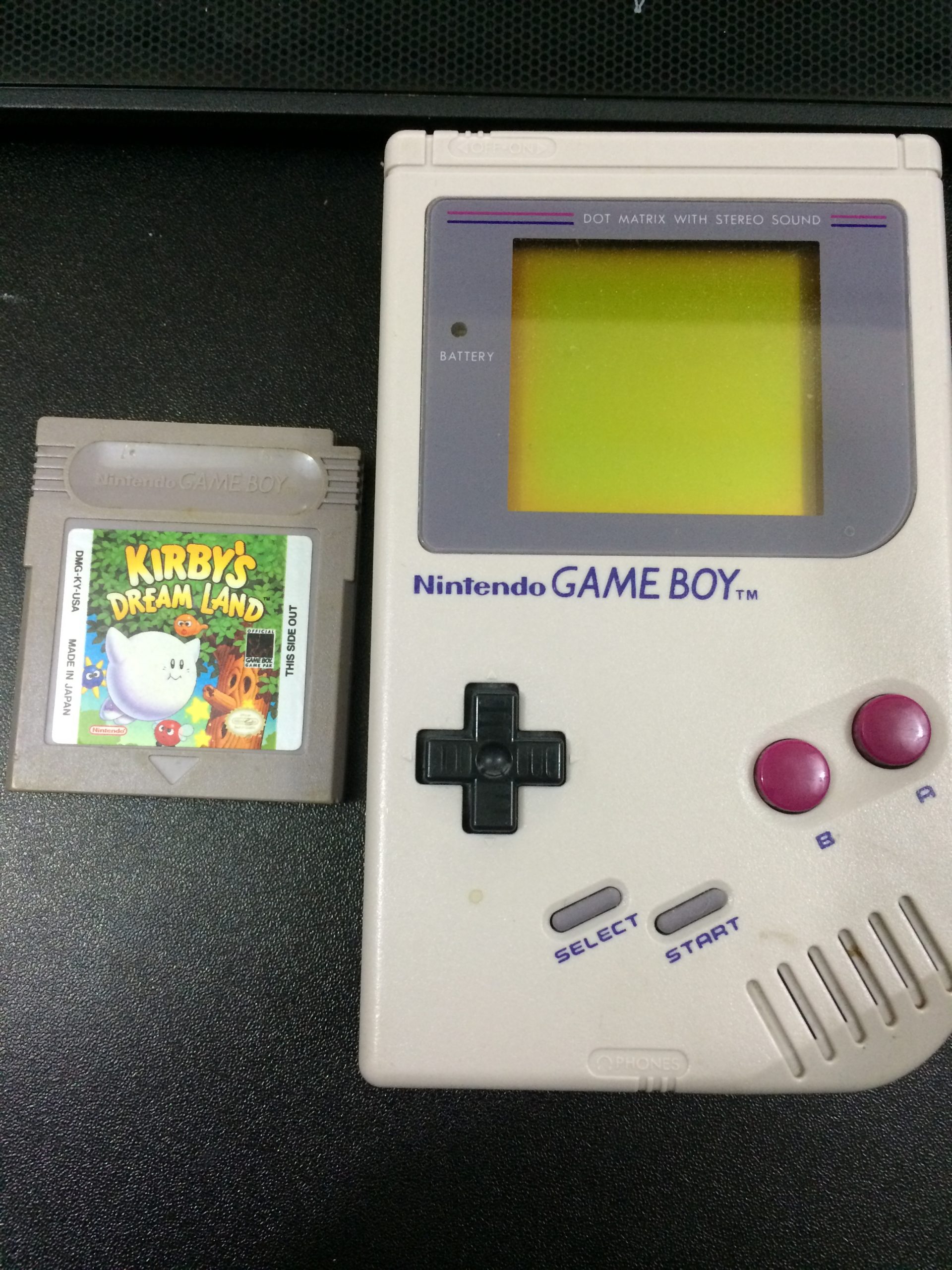 Hello and welcome to a very special, bite-sized edition of Sound Test, where we discuss console gaming’s cuter counterpart – portable games! Today, we bring you the pink fluff before he was pink: Kirby! This version of Kirby was brought to us on the original Game Boy and was called Kirby’s Dream Land.

Kirby’s Dream Land was released August 1, 1992 in North America, August 3, 1992 in Europe, and April 27, 1992 in Japan. It was developed by HAL Laboratory, published by Nintendo, and its music was composed by Jun Ishikawa.

Alright all you youngsters with your HD games and giant flat screen TVs, back in my day I played on a portable grey hunk of brick that displayed games in a gross yellowish green. Yeah that’s right: this thing couldn’t be played unless you were in a bright room or you were fancy and had an attachable light source – which I did of course, no biggie. With hardware like this, the designers needed to make Kirby stand out when playing the game. So they made him a white blob. Obviously we know the titular little fluff ball in his pink form, but it is nice to revisit his origins.

As I mentioned, this is the game that I played when I was a kid. This version is what introduced me to Kirby and all of his glory. Kirby’s Dream Land for the Game Boy can be beaten in probably 20 minutes without being a pro gamer. So why talk about something that is so short? Well, because this is the game that made me notice the official soundtracks in video games in general. When you beat this adventure, you get codes which you can enter in at the main title screen to give you a higher difficulty. Once you beat that harder version you get additional codes to unlock a music test screen. Of course, you didn’t actually need to beat it on both difficulties to have access to them, but the internet didn’t exist back then, so I didn’t know!

In the sound test screen (roll credits!) you can listen to any track you want. This was a big deal back in the day, because we couldn’t just hit up YouTube to find anything we wanted. So, story time: I remember being pretty young, probably around grade 4 or 5 when I was playing this and first discovered the sound test screen. I was up playing this way past my bedtime. I beat the game on hard and got the reward of music! With my headphones in, I got so excited about the songs that I began whistling to them super loudly! Long story short, my parents were not as excited to be woken up and hear about my accomplishments as I was.

All of that to say, this tiny little game that could holds a huge significance to me. Now, onto the music!

What you get here is short, repetitive, upbeat tracks for each level. The Game Boy wasn’t exactly known for its huge storage space, so composers had to be smart and pack everything you needed to hear into small snippets.

The title screen music says it all once you power up this cartridge. Short and catchy is the name of the musical game here. There’s a constant rhythm keeping a super upbeat attitude, while the higher register whistles and beep-boops express the title or level’s theme.

Each level contains a different track which, while short, gives the player all the information needed. The first level, Green Greens, opens up as the introduction to the game. It’s a straightforward level that acts as a tutorial of sorts, and the music is just as light as the level itself is. Opening up with a whistling upbeat and a hella catchy tune, this track will be stuck in your head forever!

Light and breezy is a recurring element throughout Kirby’s Dream Land. Whether it be the level design, the music, or just the direction of the game itself, everything is easy-going and approachable. Yet, despite being chill, the music still represents what it needs to. Take the “Castle Lololo” theme for example: while it has all of the same elements as the title and the level before it, the music here actually feels like we’re at a castle, just like “Green Greens” felt like we were in a field. It’s amazing to hear that even with all of the limitations, we still get some killer tracks full of intent.

“Mt. Dedede” is by far a standout here. It feels like you’re getting amped up for a boxing match (which you are in-game), but just listening to the track on its own makes me think of Mike Tyson’s Punch Out and definitely not Kirby. The level here is the final one, representing the build-up to finally besting King Dedede, so the upbeat and kick-ass melodies get you pumped up for some serious king stomping.

We close out the game with the “Ending Theme” as Kirby flies over Dream Land, returning all of the food to its citizens. Oh sorry, spoilers; the story was real intense. Just like everything else we’ve heard, it feels like an ending while still managing to be upbeat and catchy as all hell.

While Kirby’s Dream Land may be a weird game to focus on in regards to music, it’s still worth a quick look back to appreciate the smaller details of this incredibly fun game that spawned a whole franchise. If you’ve never played it, change that – it doesn’t take much time to conquer.

Thank you for taking the time to join us on all our fun adventures this year with Sound Test. We appreciate all of the support. We hope you continue to join us as we tackle even more games!